Zoogz Toozday is back, for one post - a large collection of early recordings from the late Zappa/Beefheart-inspired-bandleader-gone-punk/ comedian/ crank/ mad genius Zoogz Rift. We featured an album of Zoogz with his band The Amazing Shitheads every Tuesday for a while there, then super-awesome generous reader myxsoma laid some more on us, and, once again, he has gifted us with 3 bootlegs taken from cassettes of Zoogz and various enthusiastic cohorts chronicling his earliest recordings, some going all the way back to 1973: "The first two are apparently from his band "Zobus" which was his earlier band before the Shitheads." All 3 volumes contain text files with useful notes. Longtime sidemen Richie Hass (vibes) and Scott Colby (slide guitar) are featured. Sound quality varies, but is generally pretty good, considering. 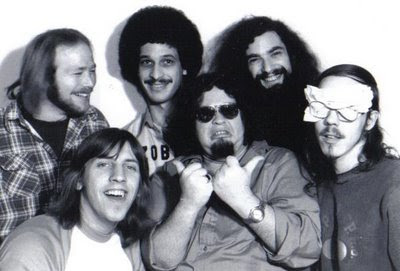 The first folder "Zobus - the first demo - 1973" is the early stuff. In 1973 Zoogz would have been a mere 20 years old, and still in New Jersey, before he made his name in Los Angeles. If you're used to the thorny complexities of Rift's music, this stuff may surprise you - it's as much garage-rock as anything else. His style may not have gelled yet, but his attitude certainly had: the punk-before-punk "Rock 'n' Roll" has him and his bandmates howling: "I'm sick and tired of rock 'n' roll, so fuck you!" Elsewhere, there's "Jugular Vein," a Sun Ra-like freeform freakout; a latin music/Santana parody; an almost respectable bit of fusion with the not-so-respectable title "Not Drenched In Farts;" tape tomfoolery; Moog mania; and an acapella shouter, with the band exclaiming: "We've run out of ideas!" Fun, funny, and certainly unpredictable. The man was well on his way.

"Zobus 1975-1977 - Lovely Girl demo and rehearsals" is the next folder, and it's sounding better, more professionally recorded. "Would You F-I-B to the FBI" is a brilliant oddity, a Chipmunk-style novelty that turns into a circus waltz. "Tits and Ass" is cool, if a bit too obviously derivative of its inspirations: Zappa-esque lyrical crudity + Beefheartian growly vox and bluesy rock. Some of the soloing on the 6+ minute instro "Can't You See That B Can Be C Flat ?" is questionable, but is more than made up for with "Inside My Head There's A Vacuum," a live (but well-recorded) 17-minute groover from their last Jersey show before heading west. It's a downright sample-able funk-fest, with some real tasty Haas marimba solos, and spoken word nuttiness: "What do you think it's gonna be like when we finally get to California and show them our avant-garde weird music to the record companies?" "It's not gonna be any different."

"1978-1979 - Outtakes and alternates" features versions of a number of songs that did get released on a proper Zoogz album, "Idiots on the Miniature Golf Course", as well as songs that didn't make the album, inc. another version of "Would You F-I-B to the FBI", and the cowboy piss-take "The Man Who Slugged Your Mother" (did county bands ever actually use vibraphones?) No longer known as Zobus, they're Zoogz Rift's Micro Mastodons, and their playing is as tight as a drum. Loony guitarist John Trubee is now on board. Next stop: SST Records, and '80s college-rock notoriety.

Funny (or not) - just as I was listening to this stuff today, I checked my email, and learned that Mediafire had taken down two albums from this blog. Two of those Zoogz Rift albums that I posted couple years ago.  What timing.  I'll try to get 'em back up soon.

Most drolly, & illy, surprising...yesterday I went to the official Monty Python site & discovered that I am "Blacklisted" there.
Always look on the bright side of Nazis disguised as British
Upper-Class Comics *ta da te da*

“Would You FIB to the FBI?” was actually covered by Rudy Schwartz Project many years later on the Gunther Packs a Stiffy album (one of their best). That was where I first heard it, great to hear the original! Thanks!

Wow, I'd love to hear that. That tune's become one of my all time Zoogz faves.