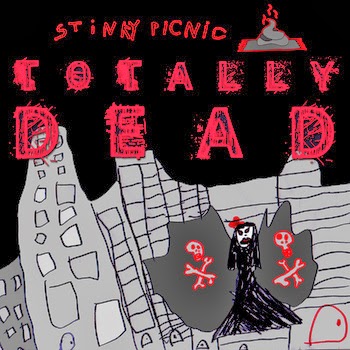 Can't argue with that.  These words of wisdom come from the title track to shoegaze-y electro father/daughter duo Stinky Picnic's latest name-your-price album. We've been following their career for a bit now, so li'l girl singer/lyricist/conceptualist Indigo must be getting pretty old.  What is she, like, six now?

The fun and innocence of this is so opposed to our previous example of strange music from Australia, dark satanic rapper Ice Cold, that it could give you whiplash. Highlites include the catchy above-cited title tune, the awesome 2-part "I Am A Robot" (a totally cool bit of pre-school Kraftwerk-goes-psych) and the 54-second "Lullaby for Bunny," in which dad puts down his space guitars and lets a little girl sing a simple song for her bunny - so pure and sincere it could put a lump in the throat of the most heartless bastard. All music should be like this.

By request, Scott Johnson's "Rock Paper Scissors" is back up.

You may have seen that "viral" (as the kids say) sensation Babymetal, the cutesy Japanese girl metal band. But from down Melbourne way comes something even stranger: Satanic death-metal that isn't metal at all but hip-hop. Over boomin' (if dark) electro beatz, MC Ice Cold drops rhymes like "Your life I steal and your soul I’m takin /cookin MCs like a pound of bacon... dissers be dissin and the hataz be hatin /but it aint no thang when you’re in league with SATAN" (from the song "Awaken Ancient Spirits"). Vocals delivered, but of course, in that menacing Cookie-Monster growl. Very funny, but despite song titles like "Satan Iz Tha Gangsta" it's not intended to be a parody but rather, according to our Aussie spy Buttress O'Kneel, "he says it's more like a 'what if' - 'what if hiphop had been the outlet for necrosatanists rather than metal?' - like those books that imagine what it would be like if hitler won the war, or if the dinosaurs hadn't died out."

Get 8 free songs from the:


I wonder if anyone has done anything like this before? After all, the inverse - ghetto gangstas playing heavy rock - has been around for decades, e.g.: Ice T's Body Count, Suicidal Tendencies, the "Judgement Night" soundtrack.

More strange sonic wonders from Down Under coming soon.  Thanks, B'O'K!

Let Us Explore The Pocket Calculators of Many Lands

Kraftwerk, the greatest, most visionary band that will never be voted into the Rock 'n' Roll Hall of Fame, are in the midst of an 8 show stand at Disney Concert Hall. And as it has been sold out for months (anyone in L.A. got an extra ticket? I'll do anything!  I'll even pay for it!), I must lamely content myself with this listening party of all the different language versions of their 1981 classic "Pocket Calculator." And I still am not tired of this song.

No-one uses calculators anymore, but otherwise the album from whence this song comes, "Computer World," pretty much nails it.  We do all have computers, which seems obvious now, but sci-fi writers or futurists never spoke much about home computing or the internet. The future was supposed to be all about space travel.  I have a book from 1979 with predictions for the year 2000, and it's a lot of: moon colonies, Mars landings, etc. At least Isaac Asimov said that we'd be able to read newspapers headlines on TV, which was close. But the song "Computer Love" even predicted internet dating. Kraftwerk for the win.  And these retrospective shows they've been doing lately are their victory lap.

Those men-machines from Dusseldorf also did an unreleased Italian "Pocket Calculator" for TV:

Had a request a few months ago for The Ridiculous Trio plays The Stooges album to be re-upped, but the files had gone missing. So big thanks to reader Traitor Vic for sending it our way yesterday - the same day we learned that Stooges drummer Scott Asheton had died.  Tho I'm sure he had nothing to do with that.  (Uh...right, Vic?)

I never saw the reunited Stooges. When I saw Iggy live years ago he played lots o' Stooges material and I was satisfied with that, and anyway I'm always dubious about these long-dead bands getting back together. But now I'm kinda regretting it. Hmm...maybe I should see the Sex Pistols next time...

Will wonders never cease? Jandek now tours, Dot Wiggin of the Shaggs has a new album, and our own fascinating outsider music discovery (actually, he discovered us) The Everyday Film has given his first interview. This coincides with a new video (see below). We now have a name, face, and a bit of background on transgressive audio artist The Everyday Film, courtesy of Italian writer Davide Carrozza:

Interview with the Everyday Film

Longtime readers of the blog may recall that the Everyday Film project has been so steeped in mystery that we've never known the slightest thing about who or what is responsible for these most striking, disturbing, and mordantly funny recordings. CDs would just show up unannounced and unexplained in my PO box. Well, we now know that the Everyday Film is one Drew Steinman, lives in New Jersey, likes Rick James and Meat Loaf, and is the sole brain behind the music, videos, and artwork.  He admits that he has no musical influences that he can detect, and that just might be the most impressive thing about TEF, that he isn't, unlike just about everyone else, the sum total of his record collection. Steinman's stepping into the light does not destroy the illusion of a bewildering enigma, not with such choice quotes as: "My ideal audience is the person completely alienated and losing touch with reality."

Carrozza also reviews and analyzes TEF's ouvre in a separate article. It is gratifying to see someone take the works of a so-called "marginal" figure of the music world like TEF and give it such a serious treatment.

This site is still the only place to get most of the Everyday Film releases, e.g.: the first four albums. And we have a new video, a preview of the forthcoming album "Bleed Over."  He sez: "Unlike my other stuff this tune is very danceable."

The Gospel Accordion To Frank 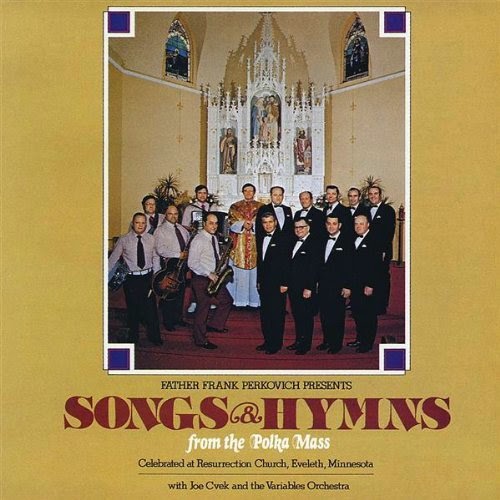 And lo! the Lord appeared to Father Frank Perkovich, saying unto him: go amongst the Catholics of the American Midwest, and playeth polka music, so that they might gather in My name on the Sabbath. And Frank of Minnesota took up his accordion and in 2008 releasedeth the album "Songs And Hymns From The Polka Mass" with Joe Cvek and his band. And the blogger did LOL out loud upon listeningeth to it, for he is a damnable heathen. Clicketh on the song title below, so that you might do the Chicken Dance for Jesus:

Yes, this is real. Polka masses have apparently been celebrated for years, primarily in the Midwest, tho not without some controversy. Some feel that a secular dance music is not appropriate for a Sunday service.  And some - the REAL heathens! - just don't like polka.
Posted by Mr Fab at Thursday, March 13, 2014 1 comment:

By request, the following golden oldies are now back:

Hollywood Stomp (Los Angeles in song from the 78 rpm era)

Zoogz Rift and his Amazing Shitheads: "Water," and "Water II."

BAD BOB: "The Tunes They Are A-Changin'" 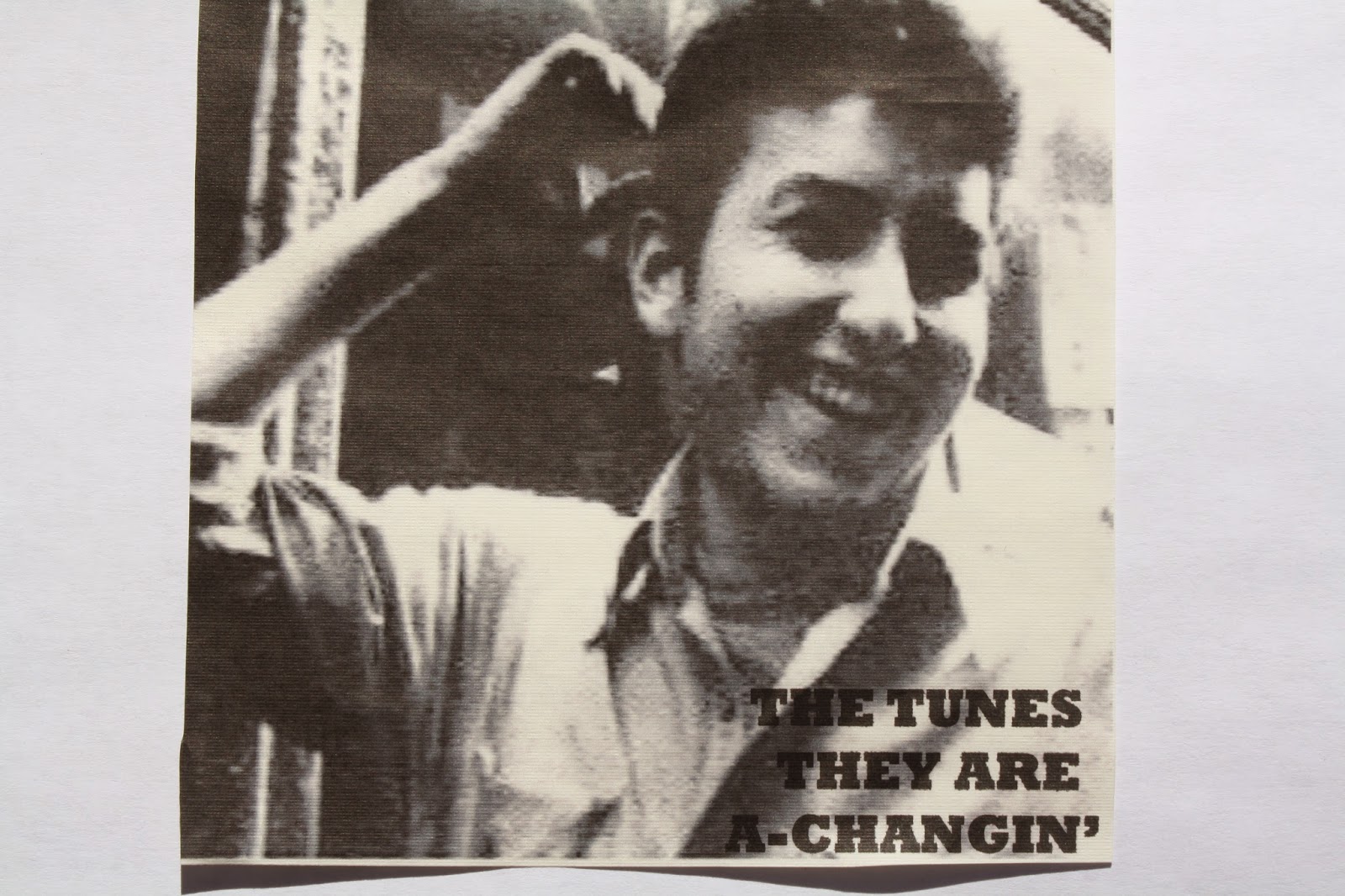 Off the top of my head, I can think of some others (a Moog version of "Lay Lady Lady," Johnny Cash, and didn't Hugo Montenegro do a Dylan album?) but believe me, this is more than enough to do your head in. Something's going on here, but I really don't know what it is, Mr. Jones.

This comes to us courtesy of MadJon, who gifted us with the "Disco Sellout" collection we posted here a few months ago.

The Tunes They Are A-Changin'

Correction: track 22 is actually "Knockin' On Heaven's Door". And if your version of "My Back Pages" was corrupted, go HERE for a replacement. 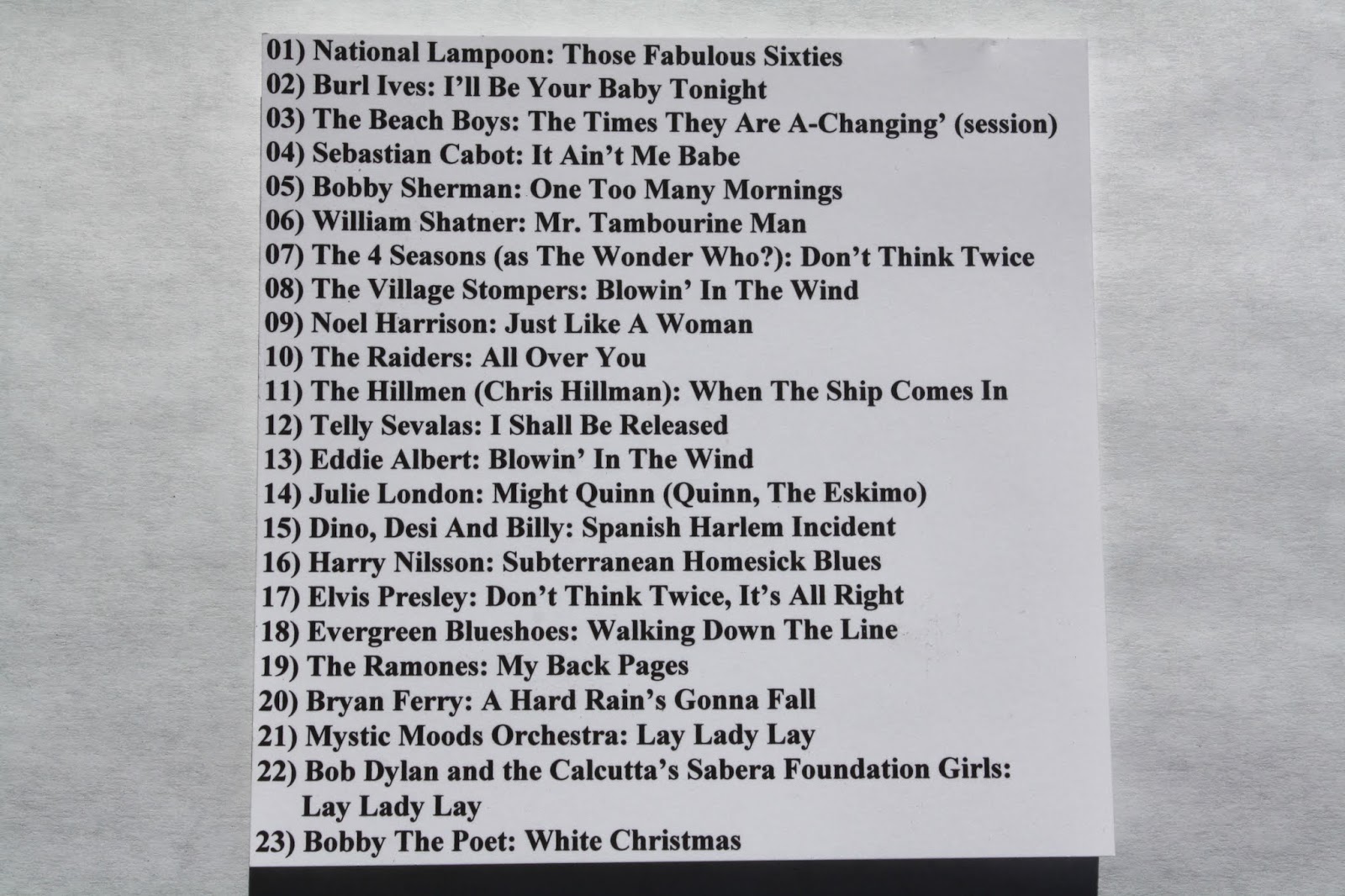 A couple/few months ago, our frequent contributor Windy sent me a big ol' batch of vinyl (that I'm still going thru) along with something he rarely sends me: a CD. 'Twas by a half-remembered '90s figure that I vaguely recalled from MTV, Maggie Estep.  Hmm, I thought, why'd he send me this?  And then she died. So that must mean something. Actually, all it probably means is that, for the first time in decades, people are talking about Maggie Estep's brief recording career, so now would be a good time to post her first album:

There really was a brief period in pop culture when poets were supposed to be the next rock stars. The media tried to tell us that about comedians as well. As it turned out, rock stars are the next rock stars, as it was and so it shall always be. But there was a spoken-word boom here in LA in the '80s, with punk-derived rockers like Chris D. of the Flesh eaters, Exene, D. Boon, Jeffrey Lee Pierce, Henry Rollins etc. all giving readings, there were spoken-word nights at punk venues, college stations had spoken-word shows, there was a series of Harvey Kubernik-produced (mostly) spoken word albums, with "real" writers like Bukowski and the also recently departed Wanda Coleman getting up there with the rockers. This went national in the '90s, as the entertainment industry was flailing about trying to figure out what the next big "alternative" thing would be that the kids would eat up (e.g.: signing the likes of Foetus and The Butthole Surfers to major labels!).  Poet Maggie Estep got swept up in this, releasing two albums of her reading her poetry and sorta-singing backed, not by beatniks on bongos, but by alt-rockers, including guitarist Pat Place, who played on a lot of those no wave/punk-funk bands we featured here on the "Down By Law" collection. Another member was in the great toy-pop band Pianosaurus.

After mainstream culture wrestled alternativeness into submission, as it usually does, Estep was free to become a novelist, which is what she was 'til her recent death at the unfortunately early age of 50.

The whole "Gen X"/MTV vibe this album gives off is a weird time-travel back to the days of Tower Records, "Beavis and Butthead," deliberately not wearing flannel shirts, gangsta rap cassettes, being young, single and broke, and lashing out at the media hype about people of my generation being young, single and broke. R.I.P. Maggie.  R.I.P the '90s. 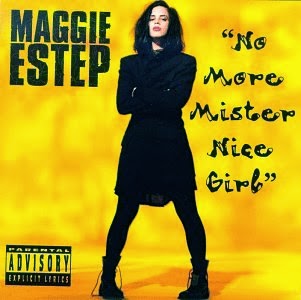 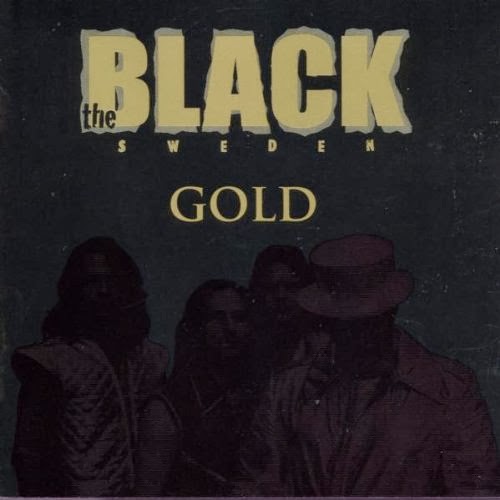 As one-joke album concepts go, "Gold" by the one-off Black Sweden works better than most.  Don't know how many ABBA songs one really needs to hear performed in full-on head-banging fashion, but the performances here are skilled as any "real" metal album, and everyone sounds like their having tons o' fun. Worth it alone for their version of "Take A Chance On Me" a la Metallica.

No one's taking credit, but apparently genuine Swedish metal all-stars are behind this.

Figured I'd better post this as copies of this CD are literally going for hundreds on Amazon. (On American Amazon, at least.  Maybe the streets of Sweden are littered with these?) 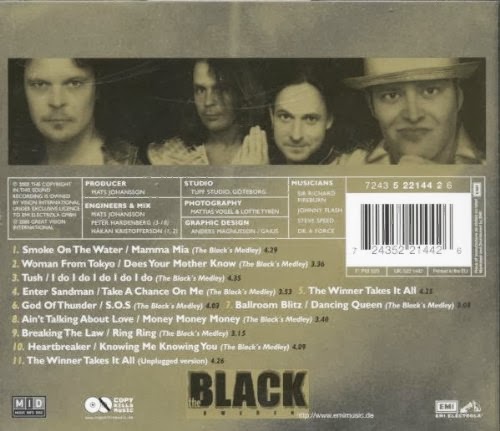