Ladies and Gentlemen! Mr. Fab presents, under the big top, AUDIO ODDITIES! Yes friends, the mp3 we are presenting here today is undoubtably the most shocking, the most disgusting, and yet, dare I say, the most interesting mix you will ever hear. 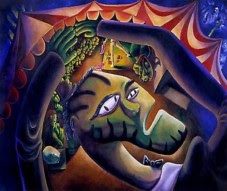 He's also compiled a handly list of homosexual performers that parents should watch out for. A look at the list confirms how dumb (or just naive) the guy is. Apparently smart-alecks are sending him disinformation, unless he knows something about Jay-Z, Kansas, and Richard Cheese (!) then we do. He even lists Elton John twice, commenting that he's "really gay." He also includes comments like:
"Morrissey (?questionable?)," " George Michael (texan)," and "Ted Nugent (loincloth)." Yep, The Nuge, that right-wing "God & Country" conservative. I knew it.

I am prepared for the possibility that this is a hoax - it's just a little too good.

Email ThisBlogThis!Share to TwitterShare to FacebookShare to Pinterest
Labels: religious

"The Sirius Institute, based on the island of Hawai'I, is dedicated to the creation of human/dolphin co-creative habitats...We intend to have full, objective, symbolic communication between people and dolphins. We are exploring many aspects of human/dolphin interaction such as underwater birth with dolphins, dolphin sound healing or restoration...

The Dolphin Valentine recording demonstrates a musical communication interface for human-dolphin communication. This is the first dolphin-created music.

The dolphins at the Hyatt Regency Waikaloa [now the Hilton Waikaloa] were recorded on Valentine's Day 1992. Their sounds were processed using the "Song Swimmer" interface developed by the Sirius Institute...

In future work, we intend to have human-dolphin concerts, where the dolphins will create music interactively using the Song Swimmer with human musicians...

The Song Swimmer interface is the beginning of an interface that will permit the dolphins to operate computers..."

"Welcome to a new form of music, where the creators are another species. We have played this MIDI tape to many musicians and they hear it as music, so, by observational definition, it is music.

Copies of Dolphin Valentine are available from siriusinstitute@yahoo.com"

Is it music? Who knows, but the result is pleasantly Eno-ish ambience, so who cares? A bigger question is: why do dolphins need to use computers?

Haven't had a chance to check out this podcast out yet, but it's description is intriguing: "Strange music for strange people...an eclectic mix of...the best indie rock, the most ground breaking of the experimental and avant-garde and the weirdest outsider music." And with playlists featuring the likes of Harry Partch, Raymond Scott, Zolar X, and T. Valentine's classic "Hello Lucille Are You A Lesbian?" it must be worth a listen:

Use Only As Directed

Before we go any further with this post, listen to this brief radio ad from the '80s...


No, it's not some tasteless joke. As I'm sure some of you remember, there really was a diet candy called AYDS. I used to see it on the shelves - my friends and I would snicker about it. But it was actually kind of sad: due to it's unintentional association with the disease A.I.D.S. the once-successful product saw its sales plunge by as much as 50 percent. By the '90s it was off the market. Hey radio DJs - drop this between songs, and watch the phones light up!
Posted by Mr Fab at Tuesday, January 23, 2007 1 comment:

Email ThisBlogThis!Share to TwitterShare to FacebookShare to Pinterest
Labels: Commercial/Industrial 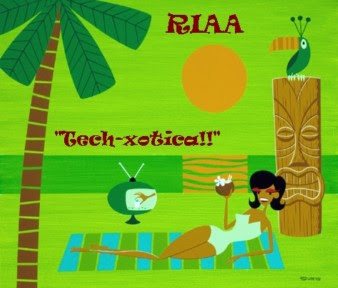 Recapping 2006, with some previously unreleased things:

3. "I Only Hustle For You": Sinatra does The Hustle (Van McCoy); beats and Brazilian percussion courtesy of BossaCucaNova

7. "Smells Like That Wild Thing": Lauren Hill's "That Thing" vs The Troggs, The Kingsmen, Nirvana, Tag Team's "Whoop There It Is", all served over The Fine Young Cannibals "She Drives Me Crazy" beat

9. "The Lonely Woman": Obscure melodramatic early '70s record called "Pour Me A Little More Wine" by Judy Lynn, with a bit of The Sweet's "Fox on the Run" and a radio ad for a sleazy Gina Lollabrigida movie called..."The Lonely Woman."

10. "Are Y'all Gonna Be My Breakaway Girls": Irma Thomas ("The Sweet Soul Queen Of New Orleans") dishes up
the '50s r'n'b over Jet's "Are You Gonna Be My Girl" and The Beasties Boys's music for "Girls"

16. "Words Displeasing to the Lord": chopped-up NWA vs some religious record

18. "The Thought for The Day": Cesar Romero vs some Christian lady

19. "Armageddon It On (or The Gaye-Pride Apocalypso)": Bill O'Reilly, Jerry Falwell and a gerbil get it on with Marvin Gaye over the calypso sounds of Blinky and the Roadmasters, and M.I.A.'s "Galang" riddim.

20. "I Love Noise!!": Ministry's "Stigamta" vs Tammie and Scotty, who are 2 kids found singing on a thrift-store cassette, courtesy of The Hump-Day Dance Party radio show in Chicago

When one thinks of the music of Hawaiian lounge legend Don Ho, one thinks of tikis, cocktails..and Army boot camp. I know I do. So does the U.S. Army Airborne.

A marching cadence is the chant that the drill sergeant calls out when his troops are marching in formation. It's one of the last surviving examples of the work song, a type of folk music that typically featured a lead singer/chanter calling out the verses, with all the workers responding. It served the dual purpose of keeping workers locked into a rhythm (useful when breaking rocks, pounding railroad ties, hauling rope, etc.), and keeping everyone's mind off the drudgery.

Alas, sea-chanteys and the like have been rendered obsolete in this age of portable mass-media. And manual labor jobs are often done by machine nowadays. The military, however, does not allow iPods during boot camp marching. Consequently, there are whole albums of this stuff, and I like a surprising amount of it - it's got a nice shouty, heavy beat sound that works well alongside '80s Run-DMC or Beastie Boys.

Email ThisBlogThis!Share to TwitterShare to FacebookShare to Pinterest
Labels: covers

In the late '60s, Rochester, New York elementary school teacher Nancy Dupree decided to break from the usual music-class traditions and write original songs with her students. The precocious inner-city youngsters had seen too much in their somewhat turbulent young lives to really be able to relate to the corny kiddie stuff that usually passes for children's music. With Miss Dupree on piano, the kids sang their own lyrics about the things that were important to them. Kids are often smarter then adults think, so the results were sometimes surprising: e.g. the Christmas song "What Do I Want" features a girl proclaiming, "I want a man! A black man! A man like Malcolm, hey hey hey!" I can't imagine hearing songs like that on any Barney album...

They also wrote tributes to two icons of black America, James Brown and Martin Luther King. With the recent passing of The Godfather of Soul, and MLK Day coming up this Monday, I thought it would be appropriate to hear them both.

Ghetto Reality: "James Brown" - "Uh! With your bad self!" I heard some indie rockers cover this one
Ghetto Reality: "Docta King" - Miss Dupree sings Nina Simone-like at one point; this beautiful song sends shivers down my spine

Folkways Records released an album of Dupree & Co. called "Ghetto Reality" in 1969 that sounds so raw it could very well have been recorded in their classroom. It's still in print through Smithsonian Global Sound and is a must-have for any outsider-music library.

And check out this archived NPR radio segment about '70s Kiddie Funk.
Posted by Mr Fab at Thursday, January 11, 2007 4 comments:

Email ThisBlogThis!Share to TwitterShare to FacebookShare to Pinterest
Labels: children

When I was guest-DJing on "Radio Mysterioso" (see previous post), I told SpaceBrother, the show's host, that I had brought some music by Rael. He exclaimed, "Wow, I didn't know he made music. He's one of my favorite kooks!" Yep, mine too. As leader of the UFO cult the Raelians, he fooled the ever-lazy & gullible media by claiming to have actually cloned a human being. And doesn't he look snazzy in his white tunic and flashy jewelry, posing in front of flying saucers?

But he actually started his professional career as a singer/songwriter in France in the '60s before he got into the space-guru business. Going by the name Claude Celler, he made several recordings and performed extensively. An encounter with a flying saucer ended his music career, but he still records tunes occasionally. His style owes much to Jacques Brel. Despite the modern production, he still has that world-weary '60s French pop feel that I've called "existential-lounge." Only now he's singing about aliens. Specifically, the Elohim, the race who he claims contacted him with their message of peace and brotherhood. There's a page of mp3s of his latest songs here, including this one:

I'll be guest-DJing on Spacebrother's web show Radio Misterioso this Sunday Jan. 7, 8-10PM Pacific Standard Time at killradio.org. The show is all about "UFOs, conspiracies, psychedelia, parapsychology, black budgets, disinformation and surpressed information. Interviews with mind mavericks, and music from people who will never get a record deal and just don't care. Archive and podcast at radio4all.net."

With a show description like that, I figure I'd better bring the Space-Age sounds, and actual weird religious/cult recordings, among other things. Spacebrother has quite a groovy collection of spacey sounds himself - you can thank him for this jewel:

The Kirby Stone Four - "You Came From Outer Space"

The KSF were a popular vocal quartet in the '50s who often worked with Space-Age music titan Dick Hyman, which may explain (somewhat) the loopiness of this track. It starts off like a swingin' Martian love song, but soon descends into whacked-out non-sequiturs, with one of the vocalists gibbering nonsense. Anyone who thinks music was boring and square before rock'n'roll "saved" it should listen and learn.

Sonic Reclamation Industries, our on-line re-issue "label," is returning to the inter-webs with two old compilations, and new collections on the horizon:

It includes the Les Baxter song The Beasties Boys sampled for "Intergalactic," one tune featuring Herbie Hancock on piano (John Murtaugh - "Slinky"), appearances by Enoch Light, Martin Denny, Herbie Mann, Hugo Montenegro and many others. Blast off! And thanks again, Bob.

Late '70s/Early '80s Los Angeles Underground Sounds - Rare, Ripped From Vinyl. Though L.A. hardcore punk has been extensively chronicled, and commercial New Wave acts live on in '80s club nights and hit compilations, another side of the late '70s-early '80s scene has largely been overlooked: the intelligent, intellectual, experimentalists.
This collection seeks to give these artists some long-overdue recognition. Features The Screamers, Wall of Voodoo, Oingo Boingo, Bad Religion, The Suburban Lawns, and lots of obscure greatness you've never heard of.

Happy New Year to us! Otis Fodder, with WFMU, is reviving the 365 Project. Has it really been four years since the original 365 Project brought us a strange/outsider mp3 every day for a whole year? Yeesh. Well, if we must grow old, this soothes the sting.

Otis sez: "The only change in 2007 is that everyday can feature more then just one mp3 (as server space was tight four years ago). So look for single songs to full albums shared by a host of contributors."

First up, the entirety of two collections only excerpted in the original project, "Michael Mills - Hidden and Satanic Messages In Rock Music," and an entire ABC television special from 1977, "Beatles Forever."