Swim With The Go-Go's (The Guy-Guy Go-Go's, Not The Girl-Girl Go-Go's) 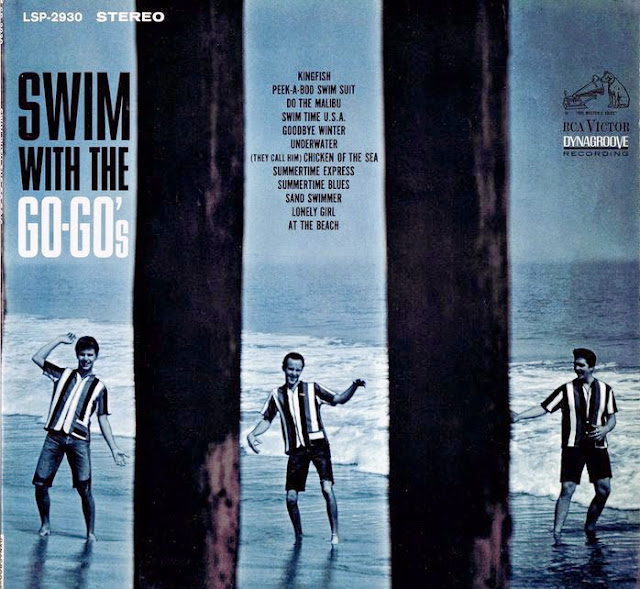 Was quite happy to hear from Roger Yorke of the '60s vocal trio The Go-Go's who sang on the delightful oddity "The Munsters" we posted last year. After pestering the poor guy for information, he most graciously filled us in on the story behind the album.

The Go-Go's consisted of Yorke, Bill Wild, and Jim Infield, backed by the legendary Hollywood session cats, The Wrecking Crew (currently the subject of an excellent documentary film, by the way.) Mr. Yorke says:

It was the three of us on vocals along with most of the best studio musicians of the time, including Leon Russell, Glen Campbell, etc.. All the songs including instruments & sound affects were recorded at the session at RCA Hollywood. We did do some travel & TV appearances as the group with special full head form fitted masks from Universal Pictures. We even got to spend time on the original TV Show set.

[Any surviving videos of their tv appearances?!]
Both the Munsters and The Go-Go’s was quite a musical transition for us with Joe & Hal [producers Joe Hooven & Hal Winn] being in their forties & fifties, I re-wrote & re-arranged the songs as much as I was allowed. Bill Wild and I had played around town very successfully in groups and progressed well in our careers. Jim Infield lived in Germany at last contact I had a few years ago. I now produce and manage singing artists after being executive A&R for the Majors.

I wondered if any legal action was ever considered against those New Wave Valley girls who would use the name in the '80s. Not only did that not happen, Yorke tells us that

RCA owned the name Go-Go’s and I worked with and promoted the girl’s group.

Ha, that's great. The Go-Go's also released an album under their own name of Beach Boys/Jan and Dean-type vocal surf rock. The opener "(They Call Him) Chicken Of The Sea" boasts not only cool chicken-scratch guitar, but tells the nutty story of the title character who's afraid of water: anti-surf music? Also most dig-able: the 3-chord garage rocker "At The Beach," the Phil Spector-ish "Do The Malibu," the cover of Eddie Cochran's "Summertime Blues." I'm glad scuba divers and snorkelers finally get a boss tune of their own in "Underwater." And what's not to love about a song called "Peek-A-Boo Swimsuit"?

I would be flattered if you posted Swim With The Go-Go’s. I was the only one who surfed and we all lived in California.

There are many stories to tell… 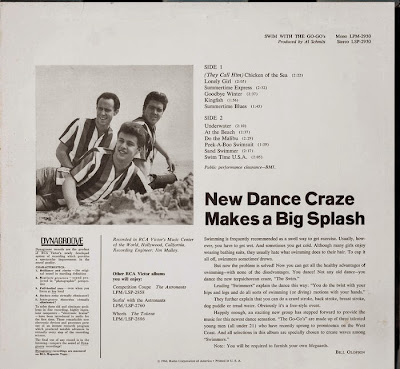 
Much thanks to Roger Yorke!!

I have obviously fallen off my new-post-every-few-days schedule, but yes, I'm still alive (and well), and have been receiving your always-appreciated emails, musics, DVDs, etc. There's no shortage of material for this here web-log. Guess I've been too busy watching TV...

How did I not see this before?! A recent live version of the greatest song ever about animal homosexuality is up on Vimeo:

You know that Mr. Will Grove-White is the right kind of people since he's a member of the mighty Ukulele Orchestra of Great Britain. But brilliantly performing the Beach Boys on nose flutes, and no other instruments?! One can only bow down: "We're not worthy!"

And here's your WTF? of the day: a nine-minute long concert, also on Vimeo, by an
Odd-stralian named, er, Dumbshit:

Our source for all good things Down Under, Buttress O'Kneel, has played with Mr. Dumbshit a few times, and even after having been an acquaintance of him for a good decade or so, is still a bit perplexed by his, shall we say, lack of regard for traditional musical standards. How self-aware is he? One wonders "...if he is and just doesn't care, or if he's kidding, or if he's doing some kinda meta-kidding-outsider combo...  he normally plays some weird indian stringed instrument, this is the first time i've seen him play a casio - adds a whole other element.  with classic songs like "my housemate's a fuckwit" and "exposing myself to the moon", he's always fun to watch."

This guy's gotta make some recordings.