THE BIG RUMBLE! Uncensored Scenes of the Nightmares of a Weirdo 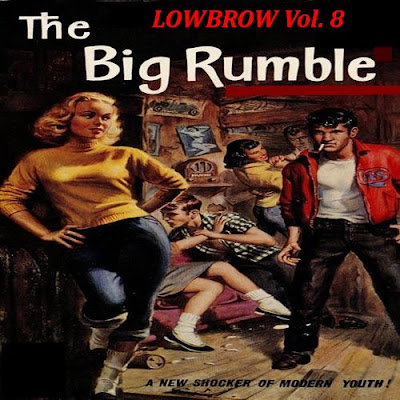 Never before in the history of blogging has there been such a SHOCKING collection of '50s/'60s audio atrocities! You'll flip your wig (or your switchblade) when you...HEAR riotous rock'n'roll and rancid radio ads! HEAR bad-boy bikers blowin' rhythm-and-blues! HEAR their rockabilly "rumble" with rival gangs! These heathen hot-rodding hoodlums and harlots are on a one-way drag race to HELL!

Music For Maniacs, the blog that brought you such SIN-tillating compilations as "Voodoo Dance Doll," and the banned-in-Boston "Hubba Hubba!," are back with an all-new spine-tingling collection of virgin vinyl rips and recorded-off-YouTube sound selections, many of which have never been digitally available before! There are other similar collections of this sort of teen trash, but these songs have (so far as I know) not been previously compiled.

Starring in this festival of forgotten (forbidden?!) 45s: a teen-aged (and unrecognizable) Scott Walker, still going by the name Scott Engel; gay novelty act Sandy Beech; one Mike Minor, possible the only lounge crooner to tackle juvenile delinquency; a Frank Zappa production; both a song by the Cheers (featuring future game show host Bert Convy) and a cover of the Cheers' hit "Black Denim Trousers" (that I think I prefer to the original); Harold Lloyd Jr - yes, the son of the hanging-off-the-clock guy - who had a short, strange life; and since every psychobilly/Cramps-related comp features Link Wray's "Rumble," we're including a different Wray rumbler that might be an even better tune.

Volume 7 of our ongoing survey of mid-century sleazy-listening sounds is in limbo - on a hard-drive that has apparently crashed. A drive I bought to be a backup for my main drive!  Damn thing (a Passport) is less then a year old. Hoping it can be recovered. So we're jumping to Vol. 8.

1 ad - "The Thrill Killers"
2 Link Wray - Rumble Rock
3 Jeff Daniels - Switchblade Sam [one of the more surreal, hysterical rockabilly boppers I've ever heard, describing some kind of orgy between Long Tall Sally, Stagger Lee, and, er, Charlie Brown?]
4 Oliver Reed - Black Leather Rock [from the film "(These Are) The Damned"]
5 The Shadows - The Rumble
6 ad - "High School Hellcats"/"Hot Rod Gang"
7 The Cheers - Chicken [presumably inspired by the "chickie run" scene in the James Dean film "Rebel Without a Cause"]
8 The Champs - Experiment In Terror [like Link Wray, those "Tequila" boys The Champs did in fact record more than one song]
9 The Diamonds - Daddy Cool
10 ad - "The Wild Rebels"
11 Bill Woods - Go Crazy Man
12 Alexander (Sandy) Courage - Hot Rod Rumble (Main Title)
13 Bob Peck - Sweet 16 [cool song Bob, but you're still the poor man's Tom Lehrer!]
14 Ray Smith - Rockin' Bandit
15 The Orange Groove - Street King [it's a shame we'll never know what geniuses made this brilliant quasi-Middle Eastern bad-boy oddity for a budget label]
16 Don Lonie Talks With Teenagers (excerpt)
17 Scott Walker (aka Scott Engel) - Good For Nothin' [Wow, before I came across this 45, I had no idea about the pre-Walker Brothers rockabilly past of Scott W.]
18 Homer Denison Jr - Chickie Run [hello, sound fx!]
19 Steve Karmen - 'Teenage Gang Debs' theme
20 ad - "Fiend For Flesh!"/"Road Rebels" [alas, these films, scarcely released in the first place, are considered lost]
21 Hal Blaine & the Young Cougars - Green Monster
22 Hells Angels (dialogue)
23 The Diamonds - Black Denim Trousers and Motorcycle Boots
24 The Rotations - The Cruncher [not "The Crusher"! but an early Zappa production]
25 Die Crazy Girls - Der Feuerstuhl (Leader Of The Pack) [is she saying "buzz off, buzz off" in this German Shangri-las remake?]
26 ad - "She Devils on Wheels"
27 Epitones - The Mighty Rumble
28 Sandy Beech - Leather Jacket Lovers [amazing that this outrageous s&m parody was released back in the '60s; how did they get away with it!? Er, well, maybe J. Edgar Hoover dug it, he was a pretty kinky cat...]
29 Harold Lloyd Jr w/Page Cavanaugh - Daddy Bird [from the terrible film "Frankenstein's Daughter"]
30 Mike Minor - Rumble In The Night
31 Hash Brown - The Rumble
32 ad - "Bury Me an Angel"
33 The Crickets - I Fought The Law [yep, 'twas a post-Buddy Holly Crickets that wrote and first recorded this classic; why was it not the hit that Bobby Fuller's version was? Perhaps  the reference to a "zip-gun", the homemade rubber-band-powered gun that punk kids used, was too controversial; changing it to "six gun" removed it to a safer Old Western past]
34 Vicki Young - Riot In Cell Block #9 [the Leiber and Stoller hit for The Coasters (dba The Robins) gets a female makeover]
35 Barry Green (aka Barry Blue) - Shake A Tail Suzie [a Suzuki 'cycles promo]