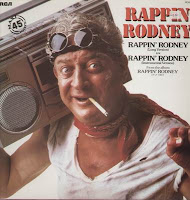 This sequel to my first batch of novelty rap 12" singles can be enjoyed and/or appreciated on a number of levels, depending on how funny/funky/cheesy/awful you find them. And they certainly are an '80s time capsule. But they're also a bit of a corrective to the standard rock-crit history of hip-hop, which goes something like this: "Rappers Delight" kicks it all off, Grandmaster Flash's "The Message" brings in social commentary, Run-DMC make it a legit musical form, Public Enemy and BDP bring more social commentary and, along with N.W.A., express the seething rage of young black ghetto-dwellers.  Riiiight. 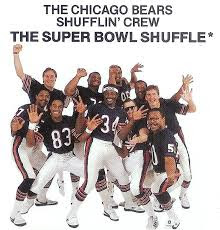 What is the real story of hip-hop?  Certainly, the above Rolling Stone-approved history was part of it, but, like early rock, it was a genre for kids, and largely a singles medium (full-length albums were reserved for true 'artists.') Plenty of dance crazes, answer records, and comedy tunes. And I should know, I was one of those kids, listening to Compton's KDAY ("Cold rockin' the radio!"), yucking it up to the likes of The Fat Boys, Bobby Jimmy & The Critters, and The Fresh Prince before he adopted the bizarre stage name of 'Will Smith.' But I also  thought it was plenty avant-garde, actually, what with the lack of singing, the human-beatboxing, electronics, turntables, sampling.  Seems totally obvious now, but at the time it was quite fresh and radical.  There had never been anything like it.

This collection is indeed what much of the first decade of hip-hop consisted of: goofy novelty records, some by celebrities jumping on a trend, some by comedians, some by one-off opportunists, even some by actual rappers. No-one cared about "keepin' it real." It was, like garage-rock in the '60s, just a goof, a bit of fun not to be taken too seriously. After all, it's not like hip-hop was ever going to actually achieve mainstream popularity, right? 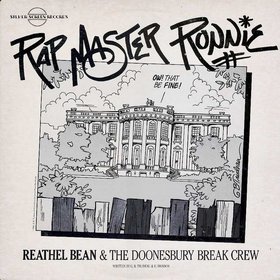 
Thanks to reader chuck for the suggestions - wish I could have found a copy of 'Contra Rap'! (And I'd kill for a copy of the Lakers rap record.)

Vanessa from house in the sand said...

Glad to find great music blogs out there! :) Keep it up!

Man...back in the day I had BOTH "The Contra Rap" (a 7-inch) and the Lakers' "Just Say No"(a 12-inch)! My record collection was mostly destroyed in a flood, and I sold off what was left...so wish I could share those two with you.

Also "Get Metsmerized" by members of the New York Mets (the label credited it to "Our Team"), which really made the other sports-related rap novelties look like classic Run-DMC. If anyone thinks all black people have the ability to rap, one listen to Darryl Strawberry will forever disabuse them of that notion. It also had some of the lamest rhymes ever ("I'm Tim Teufel, let me begin/By saying I was once a Twin"; "When they want a batter/Filled with terror/They call on me/Rick Aguilera"), but the real nadir of the thing was when they made Rafael Santana, who obviously was much more comfortable with Spanish, rap in English. Good times.

Ha, reading those rhymes had me laffin'. Reminds me of Daryl Strawberry's solo turn "Chocolate Strawberry." Think he did it with UTFO. Had it on a long-lost cassette.

A huge round of applause, keep it up.
hip hop beast

absolutely tremendous job on this and vol.1, you are truly a Mr Fab for the ages. thanks x 1000.

This is Tha Shit! Fucking priceless my brother...this is like a lil time machine- it just transported my ass back to the awesome 80's...PURE GOLD! Seriously have not heard some a this in sooo long......!
Thank you my man you Is mr Fab

Thanks again for another insane mix Mr Fab! I especially enjoyed The Qwarymen, Elvira, the 'Roaches' track and Eddie Murphy. I have been well familiar with the Mel Brooks tune for quite a while and it is a doozie!

Glad this one made so many b-boys/girls happy. Maybe there could be a vol. 3. But I gotta get that Lakers "Just Say No"...