New Leaders of the Eldritch Cult

It's an excellent new album from The UK's Will "Seesar" Conner and his large contingent of daemonic underlings creating Lovecraft-inspired dark ambient soundscapes, much of it created with found things on which mortal man was not meant to be making music.  You might not necessarily know that from listening to this album, tho, as it's all quite musical, with each track creating its own sonic world. No random, self-indulgent banging-and-clanging here - Dr. Connor does have a PhD, after all.

The opening track is some genuinely spooky stuff - Mr. Connor shouldn't be surprised if horror film directors come a-calling. "Sirens" sets us adrift on a haunted ship lost at sea. Other tracks suggest dense rain forests, or swarms of giant insects. Way cool! Too bad this album came out after Halloween.

I asked Connor about he and the other members of his coven's use of found/invented instruments: "the re-purposed stuff is on all the tracks and that's all me, for the most. There's bicycles, pot lids, mixing bowls, unopened 2 litre bottles (they make great chime sounds!), bags of fertilizer (that was a less than pleasant day at the studio for my nose...), glass jars, various bottles, pieces of aluminum, newspaper, plastic, and much more. Arcaide makes a lot of his own electronics, and I think Benjamin Pierce does as well. Hell is Carbon is entirely guitars, but he used extended techniques for all the tracks to which he contributed. I think Druha Smrt, Babalith, and The Strange Walls (for this one track) used primarily store-bought instruments played traditionally, but, as you can hear, they stayed well away from standard melodic and harmonic material for the most." 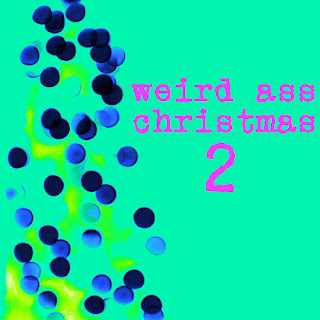 Our pal Cat A. Waller has assembled another great batch of oddities, novelties, and cheese with a yule-time spin and I'd love to break it down for you, but Cat fears the copyright nazis, and would rather you just download this beast and check it out for yourself. Actually, a lot of it is quite old, so it's probably ok, but hey, can't be too careful nowadays. I can tell you that it's ingredients include: polka, lounge, the voice of Mr Magoo, holiday hillbillies, some helpful radio Public Service Announcements, some vintage burlesque naughtyness, a well-known indie rock band covering a song-poem, and a quite inexplicable number about a prog-rock star in his own winter wonderland. A wildly entertaining assortment that helps to make the season bright.

Cat's other collections, and a great discovery (The Ghostly Trio album) are also available here:

To make up for my absence from blog-land*, here's about five bajillion hours of weird Christmas music. There's even a new blog called WeirdChristmas.com that has two swell podcasts so far, featuring the likes of Hasil Adkins, Tiny Tim, song-poems, and the truly horrifying Danger Woman. Hoo-yah! Pour the spiked eggnog, we got ourselves a party. 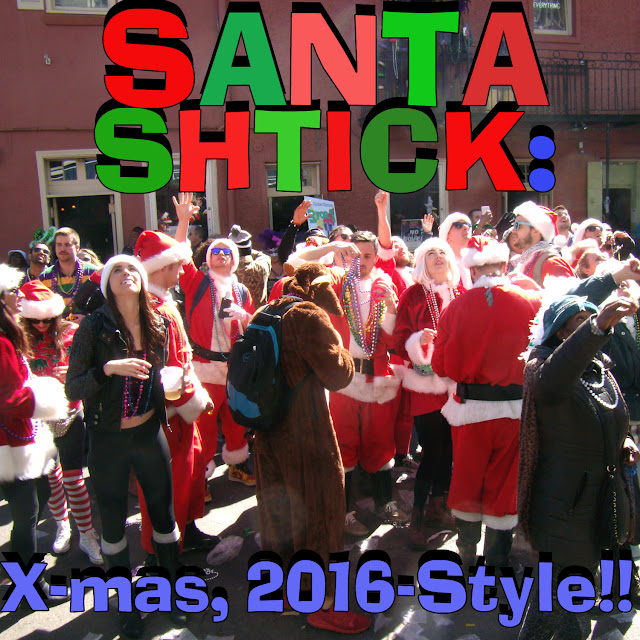 Our Central California agent-in-the-field Don-O has whipped up this HI-larious collection of Christmas Chomedy. Only 11 tracks, but classics from Albert Brooks, and the Portsmouth Sinfonia ("The World's Worst Orchestra" - featuring Brian Eno on clarinet!) sit alongside more recent gems from Stephen Colbert (one of the first things I ever downloaded from iTunes), and rad rarities that are new to me, like the one from ye olden Los Angeles radio personality "Sweet" Dick Whittington, and the gnarly surf rocker from the Go-Nuts. Oh, and speaking of L.A. radio, The Credibility Gap was a great '70s comedy show that featured Harry Shearer and Michael McKean. 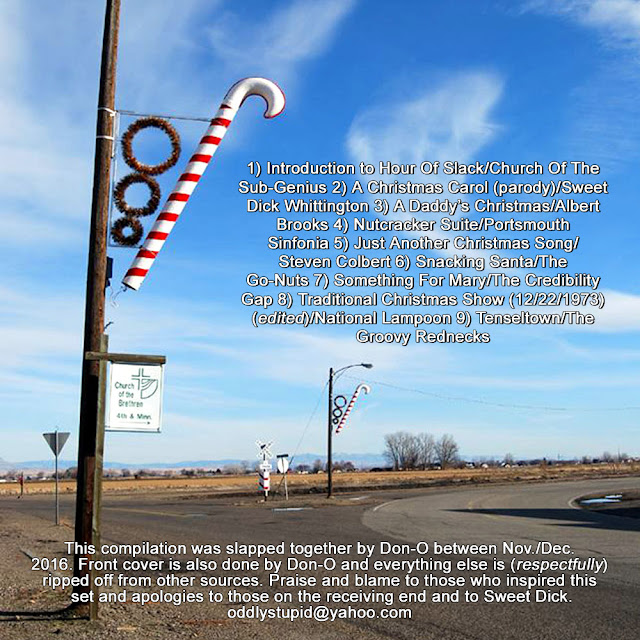 Despite the back cover artwork listings, there are actually 11 tracks; not listed is a message for KMart employees, and Jon Stewart's "Message From A Jew."

Don-O has also hepped us to the fact that the glory and wonder of Shittyflute now features Christmas songs. Yes! Inept flute/recorder solos (even the occasional violin) played over classic songs is a deceptively simple strategy that still makes me laff every time. Irri-tainment at it's finest. Much thanks to Don-O, whose "Hour of Crap" is happily now being archived.

It's Christmas-time, in the Shitty...

And if all that wasn't enough, prepare thyself for albums and albums of kooky kids and their DIY smart-ass home-brew christmas chrap, accurately described by our new Maniac pal Quentin as The Motherlode of F'ed up Xmas music: "people at the Something Awful forums have been doing an annual Christmas album since 2009. The complete archive is on Bandcamp at

http://saxmas.bandcamp.com/track/ho-ho-ho-its-christmas-time (possibly
the greatest Christmas song of all time)

http://saxmas.bandcamp.com/track/hell-bring-you-coal (parody of the
great "Hand of the Almighty" by John Butler)

I actually submitted one to this year's collection, which will probably be released shortly before Christmas - I sampled my cockatoo doing his normal spaz when I leave the room, turned it into an SFZ instrument, used a MIDI of "Carol of the Bells", and added some samples of my macaw talking. The result was described as "Christmas in bird hell" in the thread."

*A nice Maniac even wrote asking if I was ok. I'm fine, just very busy.