One Of The Most WTF-iest Songs You Will Ever Hear

Words fail me...a warning to the men-folk from a thoroughly eccentric (just take a look at these song titles), highly prolific Nigerian/American outsider recording artist.  Not safe for work, radio airplay, or your sanity. Happy Thanksgiving, everyone!

Chief Kooffreh - She Will Cut Your Balls Off

By the late 1970s, the memo had come down from the music biz execs: make a disco record. Everyone, and we mean EVERYONE is hereby ordered to march into the studio and sing over anonymous lush orchestras, wah-wah guitars, congas, and female backing singers.  Yes, even you, Ol' Blue Eyes.  It's hot, it's commercial, you have no choice. 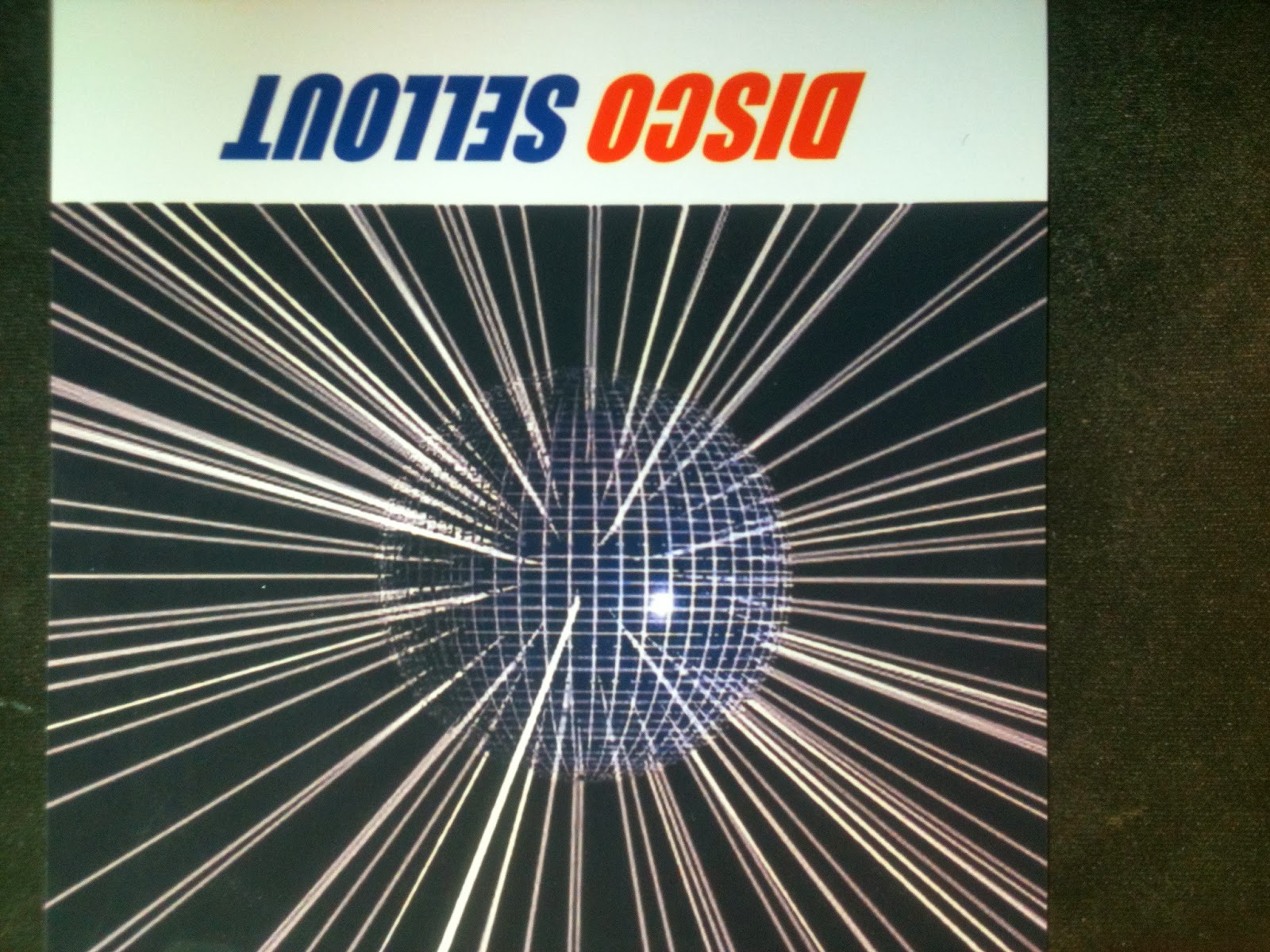 And so we have here an assortment of some of the biggest names in music pounding their well-established square peg styles into the round hole of disco. Faded stars like Frankie Avalon, Petula Clark and Teresa Brewer remade their old hits inna disco stylee. EZ listening acts like Percy Faith, Andy Williams and Johnny Mathis figured this would be a way to squeeze onto rock-dominated charts. Leftover hippies like Country Joe McDonald and The Byrds cut new songs designed to get them back into the good graces of their old Baby Boomer audience, now living a coke-filled life of affluence. I suspect that some, like Ringo Starr, simply had nothing better to do. Toot toot, beep beep, ka-ching! 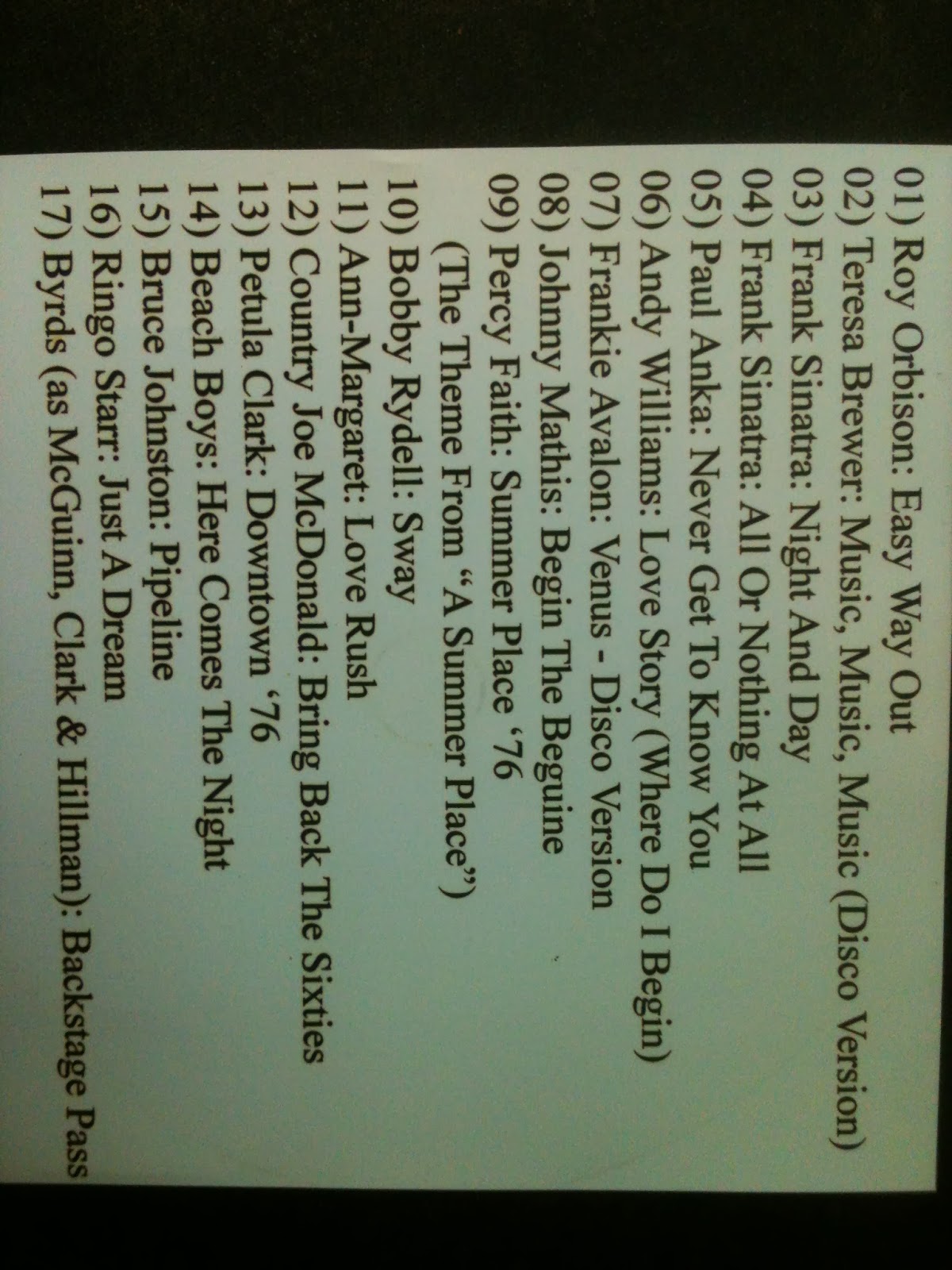 One of the great musical mysteries of my life is why I find old forgotten disco cheese so entertaining.  I never really liked disco in the first place, and I still couldn't care less about most of the big hits, e.g.: the Bee Gees, KC and the Sunshine Band, etc. But the hilarity of hearing utterly inappropriate material subjected to the disco treatment, the surrealism of the likes of Sinatra or The Beach Boys on the dance floor, the aura of pre-AIDS decadence, some genuinely impressive arrangements and powerful performances (Andy Williams kills it here), and yes, those exuberant rhythms all add up to tacky kitsch taken to almost Liberace-like levels. Plus, we have not had these songs pounded into our brains over the years/decades a la the "Saturday Night Fever" soundtrack.

If for no other reason, download this for the incredible Country Joe McDonald song. Granted, he never struck me as being the most talented sort, but this song is the very definition of "wrongheaded."

Thanks to MadJon! He's the madman who gave us the worst of Sinatra collection.

In case you missed it: more disco sickness.  (I did two other thrift-store disco comps, but they got knocked off-line.)

John F. Kennedy inspired a lot of music. This is some of the weirdest. Song-poems! A Frank Zappa composed/produced surf record!  A singing psychic! Mexican music! And all 6 tracks from the great "Sing Along With JFK" album that featured pre-sampling tape manipulations of Jack's voice "remixed" with original music and a vocal chorus. You've heard of musique concrete?  This is musique ridicule. 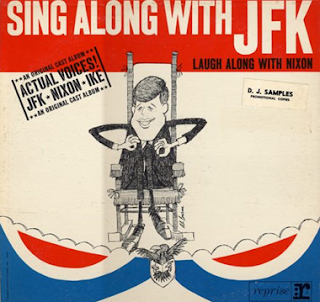 Sing Along With JFK


Thanks for some of these to WFMU's Beware of the Blog, and master blogger Bob Purse.
Posted by Mr Fab at Friday, November 22, 2013 1 comment:

Turn on the t.v., watch a movie, what do you get? Inane sitcoms, "Transformers," cops chasing serial killers for the umpteenth time...but what's this?!  Video being put to good use for a change, producing such feasts for the eyes and ears as

I wrote about Gnarboot's nutty album in 2011, but this video from earlier this year isn't so much kooky as it is pretty sick 'n' twisted.  Imagine David Lynch making children's programming. Over an eerie electronic score, the title phrase "Cats In Pajamas" is chanted mantra-like by a childlike vocalist, as people in cat masks mysteriously appear and disappear.  My three-year-old came over to my computer when I was playing this, intrigued. After all, it's kitties, right?  But when the scary knife-wielding clown showed up, she ran from the room.  Thanks a lot for scaring my kid, Gnarboots!

Speaking of sick and twisted...the gold standard of such, The Everyday Film, who released an album we reviewed earlier this year, have now added video to their arsenal of weapons of mass hysteria.  It's for the short version of their song "Goool" and, like a slideshow of early Jandek album covers, features a series of blurred, discombobulated photos in as compelling a video realization of alienation and disconnection as you're ever going to see.


Need a laugh now? Another M4M fave, the absurdist mad scientist and his "singing" robot duo the Satanic Puppeteer Orchestra, have also released their debut video, "Frankenstein's Laundromat," another welcome bit of their trademark electro-poppin' surreal humor. This is a preview of the forthcoming album, "Experiments With Auto-Croon."

Swedish female duo The Haggish Moue have a bunch of videos up on the youtubes, and I watched 'em all.  Not sure if I really need to listen to their wistful brand of electro-psych on it's own, but the largely-instrumental (+ somewhat ethereal vox) music works great as a soundtrack to spacey video art acid trips that you can get lost in. Let's fall into space...

The George King/Joe Corney Space-Age Organ Sounds are back on-line.

The first thing many Americans think when they hear the phrase "folk music" is still the Joan Baez/Dylan types listlessly strumming acoustic guitars and singing protest songs in coffeehouses, none of which has much to do with actual American folk traditions. The excellent new compilation Turn Me Loose: Outsiders of Old-Time Music
features not only the weird 'n' wild obscurities you maniacs crave, but it also serves as a nice corrective to the '50s/'60s folk revival's rewriting of history. For one thing, acoustic guitars were not too common (almost no songs on this album feature them), banjos were originally a black instrument (derived from African instruments), silly humor was much more common then protest politics (e.g.: the wacked-out duo Mustard and Gravy), and plenty of "non-folk" instruments like the piano really were used in folk music, Charlie Tweedy's berserk stylings on the ivories being one of this albums' many highlights (which reminds me of Tom Lehrer's crack introducing his song "The Folk Song Army": since the piano isn't considered a folk instrument "imagine I'm playing an 88-string guitar.") Ernest Rodgers' Greek lesson "Mythological Blues" punctures holes in the notion that these were all dumb, uneducated hicks.

Most of these recordings, taken from old '78s, are by fairly professional if necessarily rough 'n' raw performers, but at least one character here, Willard Hodgin, is just flat-out nuts. To quote from compiler Frank Fairfield's extensive liner notes: "He recorded 18 sides (1927-1928) for various labels, which is quite an outstanding feat considering how unusual a performer he was. The combination of the occasional verse speckled in with his own unusual yet charming stanzas and his delirious haphazard banjo strumming make him one of the most unique performers to ever record." 18 songs?  Someone put out a complete Willard Hodgin album! (Clicky on song titles to take you to Divshare-land:)

Another great new comp recently purchased at my local record emporiums is "Enjoy The Experience: Homemade Records 1958-1992," a two-disc set plus 44 page booklet, all for only $15. Explore the wonderful world of private-press records! I was amused to see that the booklet featured reproductions of the covers of a couple albums I own, namely Mike Hudson and Wayne & Marin Foster. No tracks from them featured on this, but I included them on my own collection "I'll Take Las Vegas." This album goes way beyond Vegas-y lounge performers, tho, ranging from the already sorta-well known punk jazz of Gary Wilson and the middle-aged former Big Band singer-turned-hippie Arcesia, to such unknowns as the hip Christian behind this absurdly catchy upbeat bit of apocalyptic pop:

The booklet includes interviews with some of the performers the compilers were actually able to track down. The heartbreaking tale of Joe E.'s swindle at the hands of a fly-by-night record label is particularly memorable. Unfortunately nothing is known about one Vinny Roma, but he recorded what could be this blog's theme song.  Hell, it could be my (or your) life's theme song:

And if that's still not enough outsider music for you, Colchester, England's premier mental patient/transvestite/stoner/coprophiliac singer-songwriter has a new album out called
"Hippie Heaven"
for your free downloading pleasure. It's like a 12" single more than an album, with the same songs appearing in slightly different forms throughout. Highlights inc the biting "Parasite Pest," and "Rock 'n' Roll Brothel" ("Why won't any of the girls have sex with me? It's quite frustrating...I could get a complex!") The backing track of "Lady Dub #1" could be by Martin Rev. And paging Yoko Ono! The final track is a 20 min field recording of wind.

During my search, I listened to funny songs by Benny Bell, Spike Jones, etc. but, if I remember correctly, this "song" was more spoken than sung. Dad was born in 1913. The record was probably an old one, but it was the late 1950s /early 1960s when we listened to it. I think my sister broke the record...
An extensive on-line search yielded nothing but a discovery of other novelty songs and performers from years ago.

Any ideas?
Thanks!
Kathleen

("Halloween Stomp" is back on-line)

They say there's no such thing as a free lunch. Yeah, well, "they" say all kinds of crap, don't they? What do you call all of these free/name-your-price audio feasts? Damn tasty, that's what you call 'em. And so I fling open the doors of the M4M diner and its' all-you-can-listen-to buffet: 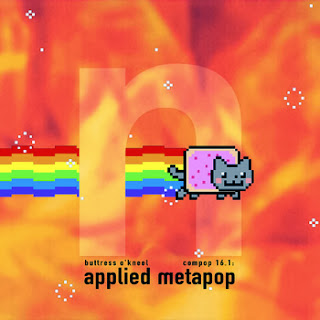 Hanetration "Timelapse" EP - I quite liked this ambient oddball's previous releases, but at first I wasn't so sure about this one: the opener "Moon" has a nice head-nodding riddim that is at odds with a somewhat annoying amateur violin. But the next track is a minute-and-a-half of niceness, and then we get to this EP's centerpiece: "Opal" starts off with a compellingly off-kilter rhythm made by no known drums, and slowly, subtly increases in complexity and texture. Excellent. The closing track "Sleep" is a 7 minute long dystopian industrial ambient nightmare - very well done, but if you value peaceful sleep I don't know if you'd want to listen to it much.

Buttress O'Kneel's "Applied Metapop" is another action-packed thrill-ride from this mad sample-smasher's series of plunderphonic parties. I marvel at how B'o'K can take the lowest form of Top 40 manure and use it as mulch to grow great, big, loud mutant killer plants. This latest album even makes me listen to that "Gangland Style" song or whatever it's called, and like it.  Bowie gets a sex change, Eno's "Baby's On Fire" might finally be the dance-club smash it always deserved to be, the "Breaking Bad" theme gets mashed, and is that the rantings of Francis E. Dec mixed in with Fela and "Yackety Sax"?

And dig these individual tracks:

The fate of "Flakes The Bunny", the stand-out track on Philip Stranger's new EP "Miscolab," makes me laff only the way an accordion-and-steel-drum bit of retarded nonsense like this can. If Mr. Stranger & Co. could concoct a whole album of this kinda thing, we might have a Bonzo Dog Band for our times. Or at least a They Might Be Giants.