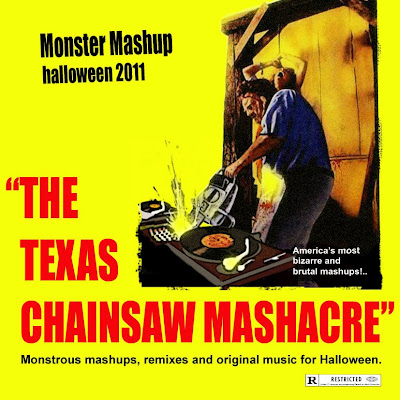 Need new spooky sounds for your Halloween party? Here's so much music I haven't even had a chance to check it all out yet, a FREE! download collection called:

2 CDs worth of mashups, remixes, and some possibly original songs. Once again, UK's Cheekyboy has put this together, a tradition going back to 2004. I can tell you that Amoraboy's "Doorbusters" is great, another example of the miraculous alchemy that can take place when two songs/artists I don't really care about (in this case, The Doors, and the "Ghostbusters" theme) are mixed into a really clever gem. And Markyboy's "The Killing Mash" is funny, taking the piss out of Echo & The Bunnymen's dead serious high-art song "The Killing Moon" by backing it with the ridiculously old-fashioned, terribly cheerful instrumental of Bobby 'Boris' Pickett's "Monster Mash."

"Strange Rush To Regulate Evil Deeds" from Orange County's always masterful Voicedude and "Psycho Killer on the Dancefloor" by A+D, the dynamic duo behind the Bootie mashup club nights, are solid bangers. It hardly seems appropriate to dance to Bud The Weiser's track, dropping gruesome audio from the film "The Texas Chainsaw Massacre" over beatz, but there it is. Apart from rockin' the party, there are pure sound-collage tracks as well, a la Alan Black's mix of Tom Wait's "What He Building in There" with gawd-knows-what creepiness. Godzilla, The Addams Family and Vincent Price show up on this album, as well. And dropping Gene Wilder and the Monster singing "Putting On The Ritz" from the movie "Young Frankenstein" over DJ Jazzy Jeff and the Fresh Prince's "Nightmare On My Street" was freakin' brilliant (if only they could get rid of the Evanescence chick's singing.) 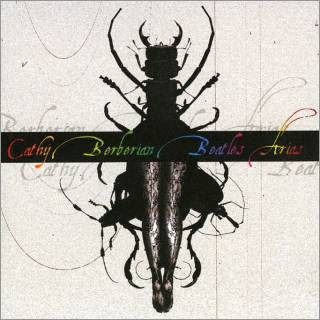 Ladies and gentlemen, welcome to hell.

Regular readers of this blog will find this album frequently hilarious (love how she trills her Rs); otherwise, it can clear rooms. Berberian has extensive legit classical and avant-garde credentials - she was composer Luciano Berio's wife; John Cage wrote pieces for her. So it's not easy to dismiss this as another misguided record company Beatles rip-off. Maybe if I spoke European, I'd understand the interview included on this album which may reveal her motives. 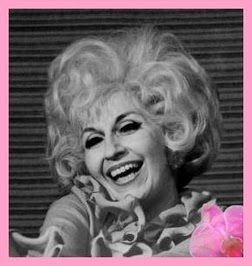 Do Other Music Bloggers Get This Kind Of Mail?

Guinness World Record holder (for woman with the longest fingernails), The Dutchess, is breaking into the music industry. The multi-talented phenomenon has recently announced the debut of her rock single, “Phoenix" The song was released on YouTube earlier this summer and created a buzz..."

So sayeth her publicist. Which is why I couldn't go into publicity. The Python-esque results would have been something like:

The Dutchess: I want to be a singer.

Publicist: Okay. And what are your qualifications?

The Dutchess: I have the world's longest fingernails.

Publicist: I see...You know, if a record company is looking for singers, I doubt that the first thing they'll ask is, 'Does she have long fingernails?'

Her useless song features Miss ScaryNails' r'n'b vocal stylings over rock guitar. The video (which I bailed out on half-way thru) had me wondering: how does she do anything with those nails? It would be more interesting if they showed her going about her day, getting dressed, etc. Maybe I shoulda watched the whole video...

The Everyday Film: Festival of Emotions

One of the most enigmatic figures in music today, The Everyday Film, sent us their new "album" (11 songs in under 10 minutes) entitled "Festival of Emotions," and, on some tracks, this usually horrifying figure actually sounds like he/they might be in a somewhat better mood than usual. Maybe even in love, or some bizarre variation thereof. Elsewhere, it's the usual claustrophobic terror-tronics. A festival of emotions, indeed.

We have permission to post two tracks from it:

"The Bottom Of The World," only 39 seconds long:

Email ThisBlogThis!Share to TwitterShare to FacebookShare to Pinterest
Labels: Abstract/Ambient/Noise, The Everyday Film

My Writing-Fu Skills Are No Match For This Album...

...because I'm at a loss as to how to describe it. It's great to encounter music that fits no known genre until you're the fumbling fool trying to review this 1993 release by German composer Helmut Neugebauer and his band Die Vogel Europas. But (*cracks knuckles*) here goes:

Mainly guitar and drums making a kind of fractured funk, like two Gang of Four records playing at the same time at 78 rpm...but with jazz sax that suggests a European Capt. Beefheart...er, more like a Raymond Scott/Carl Stalling cartoonish craziness...only with sampling and industrial-like sounds, but it's not industrial music, really....well, maybe in the Foetus sense, but it's kinda proggy, what with all the unusual time signatures and complex songwriting, only done more in the spirit of an exuberant Eastern European dance than some show-offy prog band...

I think I've embarrassed myself enough. But, hey, the Allmusic guy describes it as 'unclassifiable,' so there, it's not just me. He also says that "It's a classic and deserves to be heard by everybody."

While My Pencilina Gently Weeps 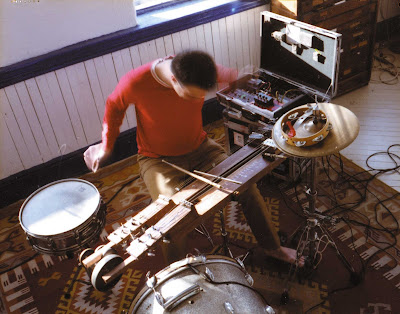 "The pencilina is an electric board zither played primarily by striking the strings with sticks; also by plucking and bowing." And musical instrument inventor/singer-songwriter Bradford Reed is, so far as I know, the world's only performer on this nifty instrument. It's a credit to his songwriting that I didn't know anything about this instrument when I first heard his music - I just liked the song.

Of this 1996 album, the Brooklynite writes, "A strictly live pencilina album. For better or worse I used to have a very purist approach to recording- It must be live. A 50/50 split of instrumental and vocal tunes." Yup, no other instruments - just the one-man-band doing his eccentric thing. Songs range from slightly dissonant, possibly micro-tonal, plinkety-plunking, to actual catchy tunes. The slightly rough, unaffected singing makes Reed appear to be some sort of indie-rock Harry Partch.

This album's going out of print, but he's got more for sale on his site. I recommend "Solo Live Songs" if, for no other reason, the excellent "She's A Rocket." And I can't believe I'm writing about someone from Brooklyn. I'm so trendy! Please forgive. 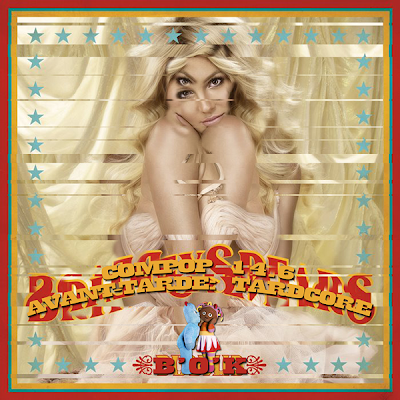 One month ago I posted a collection of artists who are making the world a more beautiful place by freely distributing songs or albums, and I asked you to vote for your favorite. Like "The X-Factor," only with good music. I might do this again, only for commercial releases, not freebies. Was one month not enough time? Anyway, the final tally is..(drumroll)...

Buttress O'Kneel is the winner! Take your bow, lady. Words like "mashup" and "remix" don't really do justice to Buttress O'Kneel's method - Top 40 pop crap gets sliced, diced, and tossed into a dizzying, exciting hardcore electro stew. Compared to other djs who timidly drop a Vanilla Ice acapella over a Chemical Bros instro just to move a dance floor, O'Kneel shreds copyrights with a blood-curdling vehemence. Smash the state!

Her 2000 album "Compact Scipppp" utilizes skipping CDs a la Oval to lovely effect, but after that, the kid gloves came off, and every album since then has employed the same break-core/sample attack. All her albums are free, and all are good. Dive in anywhere.

This is good timing, actually - she has a new album now out called Compop 14.6: Avant-Tarde: Tardcore that throws Bob Marley, Katy Perry, Black Sabbath, Queen and numerous others into the meat grinder, records their screams of agony, then mixes them with results ranging from toe-tappin' almost-pop to abstract glitch. Play loud.

"We Love Bananas Because They Have No Bones"

Debuting in the early 1930s, The Hoosier Hot Shots were one of the first, and best, novelty groups of the 78 rpm era, and if you can't figure out what they were like from such song titles as "From The Indies To The Andes In His Undies," well, pardner, there ain't much I can tell ya. Listen to me, talking like a hayseed - that's what listening to these guys will do to you. But despite their "rural" schtick, they were actually plenty sophisticated, essentially playing hot jazz with as much virtuosic flair as any fancy-pants big-city orchestra. Only funnier.

Their trademark sounds were a cartoon-ish slide whistle, klezmer-esque clarinet, superb multi-part vocal harmonies, and, quoth wiki, "...a strange, homemade instrument known both as the "Wabash Washboard" and "the Zither," played by Hezzie [Trietsch]. It consisted of a corrugated sheet metal washboard on a metal stand with various noisemakers attached, including bells and a multi-octave range of squeeze-type bicycle horns."

Hard to pick favorites, but can you really go wrong with a song called "We Love Bananas Because They Have No Bones"? And what happens to "Sioux City Sue" will interest the pain and bondage crowd. What must be a much later recording then their '30s/'40s heyday has them demolishing Elvis' "Hound Dog." Surprisingly, they play it straight on the sentimental ballad "Someday (You'll Want Me To Want You)." Tho it is pretty weird hearing the slide whistle try to make like a lonely sax solo.

"This is the silliest music I've ever heard. A-"
- Robert Christgau