THE EVERYDAY FILM: THE FIRST 4 ALBUMS 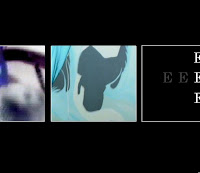 The Everyday Film has a new, er, "song" - for lack of a better word - up on iTunes called "Emotional Margin Call." Go buy it! After all, he (she? they? it?) gave me permission to post his first four releases here.

Music doesn't usually scare me. But as I wrote when I reviewed the first two albums:

"The Everyday Film's album "The House I Used To Turn Into" was, on first listen, one of the most disturbing things I've ever heard (and maybe on second and third listens as well.) Much of it isn't what most people would even think of as music: a vocoder-ized voice pitched way down loooooow mutters cryptic non-sequiturs, interrupted by brief shards of industrial music-like sounds. "Song" titles include: "The Boy In The Wall," "We Don't Exist Yet," "Budgeted Out The Perverted," 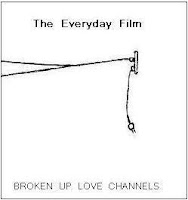 and "A New Class of Paranoia." The final track on the short album (27 tracks in 15 minutes) is the sound of some poor soul begging for his life while Mr Vocoder Voice mumbles banalities like "relax in the sun...take a vacation...take a 'me' day..." over unsettling electronic drones. That's entertainment!
Not to scare you all off, but it can be a fascinating, sometimes funny headphone experience, and a wicked beat even turns up...A 12 minute follow up CD...seems slightly less creepy, and the song titles aren't as twisted. It'll still be dismissed as sick shit by 99.9% of the population, tho."
The Everyday Film - First 4 Albums

y Film mails CDs to my PO box from time to time, and I get the occasional email from him, but I still don't have a shred of biographical info on him , or pictures, and the return addresses have been from different states each time. I used to call him "the Jandek of electronica," but, as one of you commented, he seems to be far more reclusive than even that notoriously shy outsider. There's no longer even a website for the band, so, for now, this is the only place to get these releases. Thanks very much to The Everyday Film for letting me post these here.

Yep.
On your recommendation on your earlier posting about him/they, I put out a request for some music and got a box of CDs sent to my house. No letter, nothing. Just the CDs.
One album like this would've been an anomaly. Taken as a whole, it's both fascinating and somewhat unsettling.
While people can debate the reasons for such willful obscurity (Jandek, et al), it leaves little to think about but the music that hits your ears.

"it leaves little to think about but the music that hits your ears." - I think that was the idea behind The Resident's willful obscurity. Tho you could say that their whole mysterious persona/costumes/etc became an art statement in itself.

Many, many thanks for this. Is there any possibility you could publish his email address so I could say a hello, or something?

Glad you're diggin' the sounds, Mortimer. I don't know if he wants me to publish his email address, so write to me at mail@m-1.us and I'll get back to you.

Thanks for re-upping! "The Sense Test" is the single most disturbing piece of audio I've ever heard that wasn't an actual recording of something horrible... now, I need to listen to something lighter to recover. Like "Hamburger Lady".

Hey, I know I'm late to this party, but would it be possible to reupload the files? The link is dead and I just discovered this and would love to hear this terror, thanks!

any chance for a repost?

No reposts, as Mr Everyday Film has put all his stuff up on Bandcamp.

I have his whole discography downloaded from the time he briefly put it all on Bandcamp for free a few months ago. Willing to share it.

Kenshin I'd be interested in this since the bandcamp is no longer up, if you would still be willing to share. What was the format you downloaded?

It's only mp3 128 unfortunately, as I just used Jdownloader to get the whole collection, because I'm a poor bastard. If you're still interested, I'm willing to share!