MUSEUM OF OBSOLETE INTRUMENTS: THE ZITHER 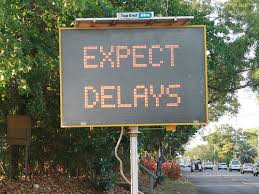 Because: 1) it's the holidays 2) I'll be getting a new computer/internet provider soon; which provider I don't know yet, so I've got that to sort out. 3) Baby Fab will be born in month or so; my life will be a little topsy-turvy for a bit, I imagine. 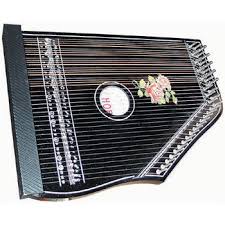 ving to play the guitar? Or with electronic production? You could get a major label deal by playing, say, a zither. Exhibit A: Ruth Welcome, whose 1950s zither albums for Capital Records display remarkable virtuosity. Listening to her "Zither Magic" album, one might be surprised to realize that there are no other instruments. She's a one-(wo)man band.

On this album, the bended notes suggest Hawaiian guitars or exotica without actually being exotica or Hawaii 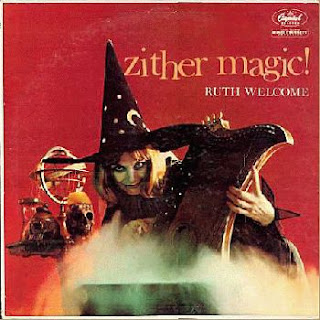 an music. But there is a foreign, if not other-worldly feel to these instros. The zither is played with plenty of energy, but there's still a mellow feel to this album, perfect for holiday cooling-out with a glass of warmed spiked eggnog. And none of it sounds like "The Third Man" theme.

Featuring "It Might As Well Be Spring," "Hawaiian Wedding Song," "Vaya Con Dios," "I Talk To The Trees," and the Dean Martin classic "Memories Are Made of This."

You may not get many groupies playing arena rock with a zither, but at least one contemporary pop combo uses one: Taxi Taxi!, two 19-year-old Scandanavian sisters on zither and accordian. They have a new version of the American folk standard "My Darling Clementine" featuring their dad on pedal steel guitar that is being used to promote a Swedish clementine fruit drink. Quite lovely, reminds me of The Cowboy Junkies, if anyone remembers them.

Check out the Davenport Zither Ensemble, if you're so inclined...

Thanks to both Ellen and Bill, nice, nice. Those stories on the Davenport Zither Ensemble were great - their site says: "Following the hugely successful National Zither Gathering in April 2008, planning has been put into motion to create a National Zither Center in Davenport, Iowa" and goes on to quote Master Zitherist Tomy Temerson.

How cool would it be to be described as a 'Master Zitherist'?

Mr Fab is this a recent re-up? I couldn't get this LP in the past, all the sudden it's available.

Me so happy, I want to talk like Zippy while I listen to slithery zither muzak!