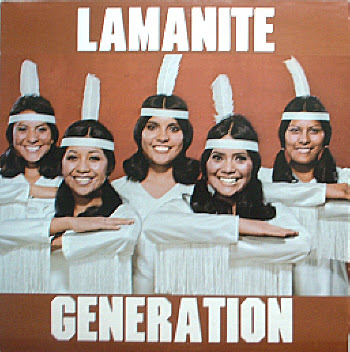 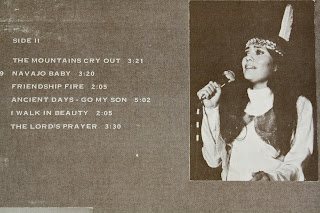 Lamanites? Is that what your kitchen counter is made of?  No, silly, Lamanites are the original inhabitants of North America, according to the Book of Mormon, and since Mexicans and Polynesians are brown people like the Indians, they must all be related!  Let's thrown them into the same category, make 'em wear Indian costumes, and sing cheery, cheezy, '70s variety show-type music! So someone thought at Utah's Brigham Young University, from whence this group comes. 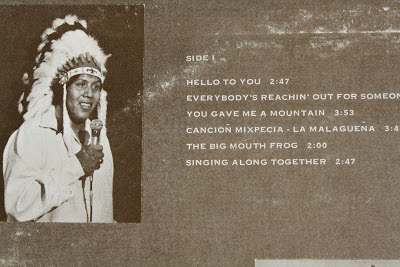 Lots of fun stuff on this album that Our Man in Salt Lake City, windy, sent our way.  Just don't expect much in the way of ethnic authenticity. The low-budget lounge combo's instrumental backing and the singer's enthusiastic performances can get absurdly entertaining. I mean, check out the cat in the headdress to the left. That's gotta be the crooner swingin' his way thru "Navajo Baby." "The Mountains Cry Out," believe it or not, is practically surf music. And a song with a title like "The Big Mouth Frog" has got to be good, right? Right. Oddly, there's almost no overt religious content. Maybe they were hoping for a mainstream crossover a la The Osmonds. 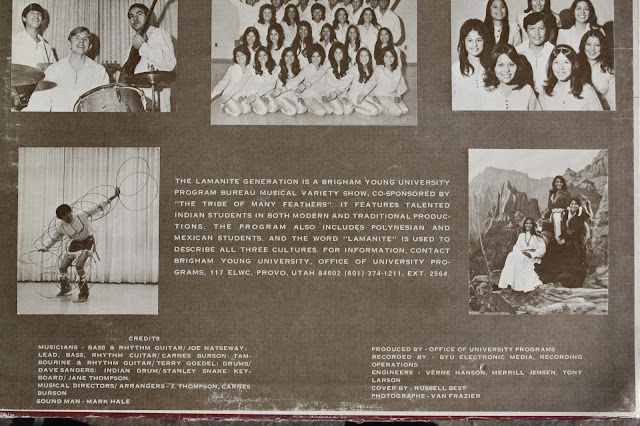 Seems like I remember seeing this one in the INcredibley strange music book, years ago...

BYU had this group touring, put out three albums, at least. They've largely disbanded and repudiated the Lamanite (American Indian and Pacific Islanders, descended from the lost tribe of Israel) histories, ever since the DNA evidence didn't corroborate that the AmInds were semitic in origin, and changed the Book of Mormon editions about the Hebrew origin of the Americas in 2007.

hahaha, I just know that the apache tribe also had a band..nice share