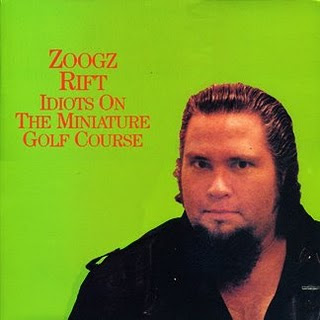 Every Tuesday for the next couple of months I'm going to try to post a Zoogz Rift album. That's the plan, at least. Even if I post every album of his that I have, it'll still only be scratching the surface - the man released 39 albums! (That's of original material - he's released a number of comps as well.) Since Zoogz is retired due to health issues, now seems like as good a time as any for a career retrospective.

If you know anything about Zoog Rift, it's that a lot of people don't like him. He's known for his loud, obnoxious, immature sense of humor (e.g. his band was named The Amazing Shitheads) and for his constant paranoid ranting...and that's what his fans say. But his fans also point out that his wildly original music owes nothing to any typical genre cliches, and he has refused to cater to the public almost to the point of commercially shooting himself in the foot.

Rift is usually compared to the likes of Zappa and Beefheart, and he does share their love of complex compositions that, unlike many too-precious proggies, still rock out with a vengeance. His instrumental lineup, often including the likes of trombones and vibraphones, can be reminiscent of Beefheart. But while Zappa sneered, Rift howls in pain. And if Beefheart came out of the blues, Rift sounds like he was caught up in the punk scene exploding around him at the time. He's from L.A., in case you didn't guess.

Yes, there are going to be tracks on these albums that you're not going to like. When someone won't stop screaming about the "idiots" of the world without getting specific, it can become it's own kind of idiocy. But don't let that stop you. For one thing, there are lots of instrumentals that demonstrate the tightly-rehearsed near-virtuosity of Rift and his bandmates, especially the also-infamous bassist/guitarist John Trubee, and the late drummer/vibeist Richie Haas. And these albums boast some great songwriting - funny, rockin', rollin', even cathartic. There are musical places that you've never been to before.

Idiots On The Miniature Golf Course

This is a good album to start with - for one thing, it is one of his first albums, from 1979 (has not aged at all). He actually sings a fair amount, and quite nicely at that, instead of just hollerin'. And except for a little bit about urination, it's not really obnoxious or offensive, despite titles like "You Can Go Fuck Yourself" (it's an instrumental). It is pretty frantic tho, from the demented childrens circus music of "I Did So," to the mutant funk of "The Night They All Came Out," to rockers that aren't too far removed from, say, Devo or Oingo Boingo, but played with such effortless twists and turns that whiplash could result. Start-to-finish enjoyable, consistent like Ex-Lax (ah, see, now Zoogz's got me getting scatological!)

A Zoogz Rift album every Tuesday is a brilliant idea. I'll be sure to check out next week. Thanks for this one.

Thank you Mr. Fab. ZR is in declining health now, and yeah, we all lost my late husband Richie Hass in 2008 to the blood cancer multiple myeloma. Zoogz did some amazing freaking music, and was also one hell of a wrestling manager for a while in the early '90s. With Zappa dead and Beefheart lost in his painting and ZR ailing it's the end of an era. This kind of intelligent, eclectic music is simply not being played because it takes too much work to learn it and play it.

Great to hear from you, Michelle. Was very sorry to hear about Richie. I know he released one cassette album that I don't have a copy of. If you want to send it to me to post, I'd love it. But if you want to keep it, hoping to re-release it someday, I certainly understand.

From what I understand about Beefheart, he's had some kind of degenerative disease for decades, like MS or something. It's probably why he really retired to painting. So, yeah, he's out of the picture.

Mind-altering. Hate to sound like a complete curmudgeon, but 99.9% of modern music (both commercial and "alternative") isn't anywhere nearly this inventive or demented. "Island of Living Puke" was the first Zoogz album I ever heard, but it fit in perfectly with where my head was at, at the time. Nice to hear that the first album is also great (my wife loathed it from the first few bars...always a good sign!)

THANK YOU for the Zoogz!!! 99% of the people I talk to don't know about him, but (thanks to my older brother) I became a big fan.