They're not just for cutting down trees, y'know. In the hands of master musicians like Kev Hopper, when bowed the humble saw can produce lovely ethereal sounds, such as those featured on his EP "Saurus." It, like most of Hopper's recorded works, is now available for free download on his site, generous chap that he is. Of the EP's 6 tracks, the first five are for musical saw. "Soulkeepers" might be my fave track, with wordless female vox joining the saw for a 'Star Trek theme' feel. 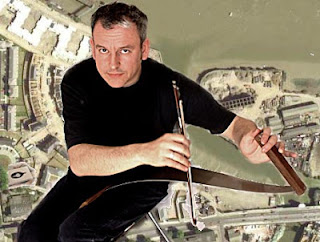 Very late '80s, a friend of mine who worked at a record store pointed to an album by a band called Stump entitled "A Fierce Pancake." "You'd probably like this," he smirked. "It's this really weird kinda Beefheart British silliness. No one here likes it. " I bought it on the spot. Great album, esp. the American version with the single 'Buffalo' added. And Kev Hopper was the band's bassist.

No Stump, sadly, but other albums available for free dl on his site include the 1990 sample-fest "Stolen Jewels," which digitally grabs everything from banjos to African vocals - the cartoonish "Punch and Judy" and "Meantime," and the sound effects-laden "Chain Smokin'" are indeed jewels. 1999's "Whispering Foils" boasts great tracks like the Steve Reich-like "Skitch Pics," and "Mr. Chuff Chuff" which sports more saw, plus marimba and Brasilian percussion. I'm not sure what to make of "The Stinking Rose," a concept album about garlic (yes, the food garlic) and apparently no-one else did, either - it never found distribution.  Still, songs like "From Herb to Eternity" and the Kate Bush-y "Sulphur Symphony" are plenty yummy. Get 'em all here:

STUMP released a killer box set a few years ago. A fierce pancake is one of my fave albums. Glad to see Kevin Hopper still doing music. His bass playing with STUMP was amazing.

Didn't know about the Stump box set, will have to look into that.

Excellent stuff!
Must admit to being more a HMHB fan than Stump fan but they did much to be admired.

I'm also a fan of the musical saw.
A friend of mine worked in a hardware store that sold the 'off the peg" musical saw (I think it was a Spear and Jackson).
I notice Mr. Hopper's saw is a somewhat more elaborate beast.

Enjoying "Saurus"
Never heard of kev hopper before, thanks for sharing!
Soulkeepers and You're A Delicacy are my favourites

Do you know there is a festival dedicated to playing saws in NYC? http://youtu.be/a1t-XKsCyes

Bring that festival to LA!
(Is there a recording of the Satie + handbells?)