Behold! The Kaleidocosmicorgrig - The Strangest Instrument EVER?! 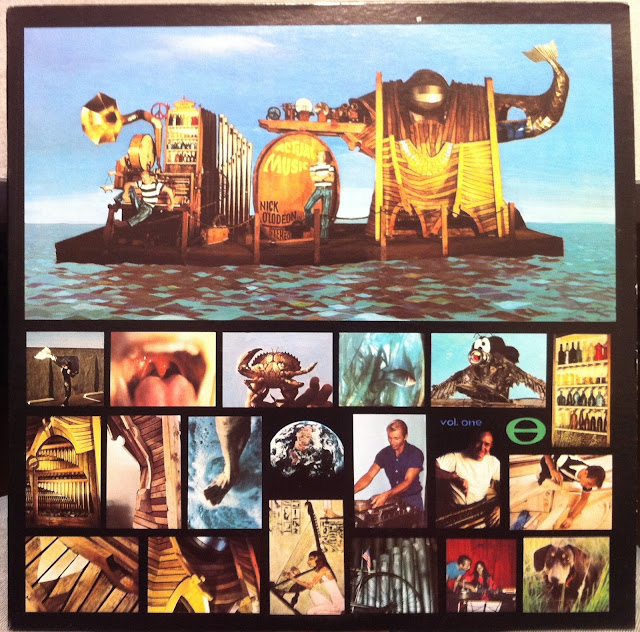 I don't usually pay $10 for obscure old records - that's like real money - but how could I resist this description from the back cover: "This is a recording of The Kaleidocosmicorgrig... it is 35' in length, 12' tall, weighs approximately 2 tons... a contrivance of pedals, keyboards, pulleys, mousetraps, electrical wires, wind machines, magnets, bellows, fishing weights, stovepipes and bicycle wheels, arranged so as to control a parlor piano, 30 tuned bottles, 13 10-foot tuba pipes, a fine bass drum, 2 tambourines, a mariachi marimba, a wooden xylophone, Swiss glockenspiel, castanets, maracas, wood block, cymbals, bonkers, zonkers, and taxihorn."

Sounds too good to be true? Many eye/ear-witnesses have testified to its one-time existence, in a Shakey's Pizza Parlor near Disneyland, California. This 1970 album, recorded live, consists largely of frantically energetic instrumentals (with a lot of Greek influences for some reason); great versions of two Latin classics, "Tico Tico" and "Malagueña;" a few originals; some silly lyrics (from what I could make out - the vocals are not well recorded, but it hardly matters); and a final group sing-along that does not feature the giant whatsit. The album is on red vinyl, and originally came with a strawberry-scented incense stick (did I mention this was 1970?) 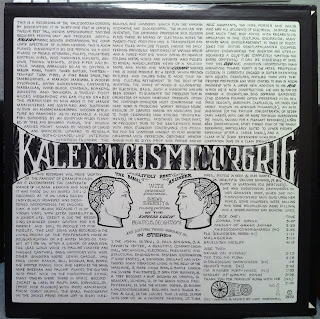 Orchestrions - mechanical music orchestras - were popular a century ago, before recordings became hi-fi. I have other albums of this sort, but this beast is clearly the granddaddy of 'em all. Featured here are the old-fashioned tunes you'd expect, but also recent soundtracks hits like "Zorba The Greek" and "Never On Sunday" (see what I mean about the Greek influence?) that suggests that Nick O'Lodeon (aka Nick Cornwell) was actively programming his machine by punching new piano rolls, creating new music boxes, and building the robots necessary to play contemporary music. Unless it was all theatrics, and Nick was playing live, but I don't think so - sure, he was playing and singing some live, but the rapid-fire piano and xylophone sound like they're playing too fast for human hands.

So what's it sound like? Pretty much like what you'd think it would sound like - berserk circus music filtered thru a '70s California hippie sensibility. It's a lot of fun, upbeat, and to say the least, unique. Who knew such things existed in our universe? Far out, man!

Nice version of La Malagueña.
Sometimes this album reminds me of The Residents' "High Horses", though less insane of course.

Was not familiar with "High Horses" but am listening now - The Residents make music for riding a merry-go-round while on acid. Crazy!

Oh no! Mediafire es no completo! Please re-post this; I must hear it!

There was at one time a strange old barbecue place in Clewiston Florida that was full of ancient mechanical instruments, and the trick was to get them all going at once, creating your own kind of Rube Golberg + John Cage experiment. What a blast! There are a lot of recordings of various mechanical instruments on the Avant Garde Project site if you're interested. I love the timbre of metal in the morning.

Will try to get your reqeusts up this evening.

Yes, the barbecue place was actually burned down last time I drove by, and the only reason I had to go up around Lake O was because some dummy on the way to a Phish New Year's Eve show off Alligator Alley fell off his rv's running boards and was squashed. I wonder if the instruments were toasted too. I'll probably never know. But your post will no doubt keep those memories alive.

There is a god. A big metal musical sculpture god. Can't thank you enough for this!

I knew Nick Cornwell very well. I met him when he was playing this instrument in the Shakey's Pizza Parlor. He was always in charge of every sound in real time. The tuned bottles were actuated by strings attached to eye hooks in the piano keys. Drum and tambourine had foot pedals. The large, fish shaped enclosure housed the xylophone, marimba, and glockenspiel, as well as a percussion section that rolled out of the fish's mouth. These (and the organ pipes) were controlled by an electronic keyboard (with a series of switches, which an organist would call "stops"), and were actuated by air pressure. Yes, a compressor was part of the rig. These could be set for a single strike or a "tremolo" strike (hence the fast notes you thought could not be done with human hands). While the Kaleidocosmicorgrig did not use any piano rolls, Nick in his youth taught himself to play piano on a player piano, placing his fingers where the keys went down. No one told him these were never intended for human hands! He was born Ralph Earl Cornwell. He passed away, I believe, in 1987 from complications of AIDS. He was also a remarkable painter, sculptor, movie-maker and poet -- a true Renaissance man. Thanks for keeping his memory alive.
-Dave Weisbart

Thank you so much for filling in my knowledge gaps Mr. Weisbart, and for the biographical info. Sorry to hear he's no longer with us, sounds like a fascinating individual. Don't suppose there's any film/video footage of this big rig, is there?

The link it's no longer available, is there a chance to bring back from the dead this excentric piece of music?

My mother was a huge fan and close friend of Nick's.
We went to Shakeys often when I was young. The rig was amazing!

I grew up listening to this fantastic artist and his creation at the Shakey's, too. I remember when he first started adding things to the upright piano that was there and he just kept going. I am very sorry to hear that he left this earth so long ago and as a result of AIDS. He was quite an influence and I credit my becoming a musician with his inspiring and imaginative take on the world. RIP Ralph Earl Cornwell!