Anyone who was around in the 1980s, esp. music fans, remembers well the 'Satanic Panic' that swept that era, at least in America (did this happen elsewhere?). Apart from ruining lives by claiming that perfectly innocent people were killing children on Satanic altars (despite that fact that not one corpse was ever found), crazy fundies also waged war against pop music, seeking hidden and not-so-hidden messages from the Evil One hisself. They analyzed lyrics and album covers, and played records backwards, claiming that 'subliminal messages' effected human behaviour.  I wish humans were that easy to manipulate.  We could put on backwards messages saying: "Don't murder. Don't wage war. Stop watching 'American Idol' and listening to crap music." And the world would be a better place.

Orange County, CA pastor Gary Greenwald got a lot of mileage out of this hysteria, selling the sermon/lecture tape presented here, as well as appearing on tv. A friend of mine back in my school days videotaped one such appearance, invited us all over to watch, and we had a regular Prince of Darkness par-teee. Oh! how we joked about it for ages.  Not only did it not scare me off pop music, I remember thinking that the clip he played from "Animals" was pretty cool. Pink Floyd sez: thanks for the free publicity, Pastor Greenwald! 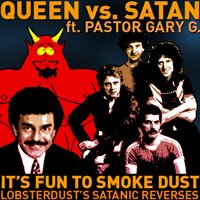 You had to have a good imagination to find these allegedly hidden messages. They'd play something backwards that supposedly said "Worship Satan, kill yourself, don't vote for Reagan," but all it sounded like to me was "Wurp-nya glurp, wobwob, yob rulb." Towards the end of part 1 of the tape and the beginning of part 2 you'll hear what happens when they played some Christian records backwards!

Apart from the unexpected nostalgia blast this tape gave me, there was another eye-opening moment. I realized: hey, that's where DJ Loberdust got the sample for his classic mashup "It's Fun to Smoke Dust (Queen vs Satan)"! I maintain that it really sounds like the backwards Freddy Mercury is saying "It's HARD to smoke marijuana," not "It's fun..." But that of course, would turn it into an anti-drug song, ruining the pastor's point.

Part 2 gets cut off, but he's just yammering on about how eeeeevil Jim Morrison was.  Thanks again to windy - you are truly doing the lord's work.

I was a teen in the early 80s, and all this hysteria accomplished was inspiring kids like me to run out and buy those allegedly Satanic albums to check it out! Oh, and nudged us into a bit of dabbling with the "dark side." I loved reading this, it brought it all rushing back!

Lynn A. Bryson, an LDS/Mormon convert, was doing the same act at LDS youth conferences at the same time, over a 2-night presentation. First night was scare the kids into ditching their rock albums; second night he'd roll out his cassettes (he had a Provo, Utah, recording label, LAB PRODUCTIONS, for vinyl 45s and Lps in the early '70s, but cassettes were cheaper to manufacture and sell out of your car trunk) and sell his music. He tried to break into pop music in late '63 with a spec vanity 45, "Big Mean Drag Machine", and had a kind of Mormon music hit with "The Missionary Song" in Idaho in 1966. Illuminati Conspiracy weirdo fans at BYU still look for his cassette series, especially THE OCCULT AND ROCK MUSIC series. The LDS book chain, Deseret Book, used to carry his line of products (Band-Aid Productions) until recently. He authored a vanity press book, WINNING THE TESTIMONY WAR, in 1982.

Only just noticed this content (catching up on blog posts) but I did a VJ performance on this very same topic - https://vimeo.com/54699118

I heard uou speak when you came to Hawaii in the early 80's and to this day avoid the music and warn other people of what I learned. I only wish I could still get a hold of some of those tapes today. I love the teachings and information.