Donald Featherstone, the appropriately-named creator of those plastic reproductions of our pink feathered friends, has just passed away at the age of 79. As if being the father of the world's most notorious lawn ornament wasn't eccentric enough, Featherstone and his wife were also known for always wearing matching outfits! Now that is just the sort of weird, goofy, good ol' American trash culture that John Waters immortalized in his 1972 film.

If you haven't seen "Pink Flamings," perhaps the ultimate cult movie, I sure as hell ain't gonna tell you about it. Let's just say that even tho I only saw it once - and this was back in the '80s, when the earths' crust was still cooling and dinosaurs walked the earth - a mere glance at the song titles of the soundtrack recall images that are permanently seared into my brain. So let's pay tribute to Mr. Featherstone with the suitably trashy soundtrack of '50s/60s rock, r'n'b, and easy-listening oldies that Waters used to underscore his characters foul (not to mention fowl) behavior. Some of these songs are as insane as any crazed early rock (e.g.: "Chicken Grabber," "Surfin Bird") while others, like the perfectly presentable "Happy Happy Birthday Baby," are used as ironically innocent counterpoints to the on-screen depravity.

Plus! At no extra cost to you! Other "Pink Flamingos"-related audio oddities thrown into the file: 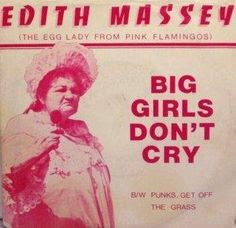 - Edith Massesy's single, which featured her "singing" a cover of the Four Seasons' "Big Girls Don't Cry," and a lovely original, "Punks (Get Off The Grass)." Massey had moved to the Venice Beach neighborhood of Los Angeles, and her thrift store was a popular hangout for local punks and weirdos, who recorded this with her in 1982.

- Divine "You Think You're A Man" (7'' version); S/He recorded a surprising amount but I just have this one catchy bit of '80s disco.

- The Illuminoids "Satan Said Walrus Eggs," a mashup from 2007 that mixes Massey's "Pink Flamingo" dialogue with the Beatles, over a stomping beat from Clap Your Hands Say Yeah. The Egg Lady meets the Egg Man, with special guest: Satan. One of the members of the Illuminoids was Howie Pyro, who took the name for his super-swell internet show "Intoxica" from one of the songs on this here soundtrack:

Are you gonna do the 'Female Trouble' soundtrack next? That is easily a superior Waters outing,with a suitably schlock-kitsch soundtrack. Like Dawn Davenport says,"I'm a Thief,a shitkicker,and...oh yeah...I wanna be famous".
If that line didn't predict the future more than a million Science-Fiction movies then i'll eat poodle crap.

Is there an actual soundtrack album to "female trouble"? I'd give a pair of cha cha heels for something that spectacular. And If there wasn't one, maybe I could assemble one if i could get a good list of the songs used...

Yo! Mr fab, don't think it exists,but i'm sure it could be assembled.I'll do some research.
And no-ones gettin' my Cha-cha heels for nuthin'!
Now where's that fresh poodle crap?

Fear not, i've assembled it already.I'll send you the file link when i've uploaded it. The only faux pas is the 101 strings wedding march and Bridal march are, in typical 101 strings style, merged into one bridal medley.

I forgot to upload it didn't I?.....well here it is,including some classic dialogue snippets:

Heh, was wondering if you'd forgotten, Jonny. spectacular, and one deserving of its own post (in a few days).