Count Otto Black made many contributions to this batch of dog meat, so continued woofs of thanks to him. Vol. 1 was more from me, the more obvious stuff - albums that I'd had for ages (Cream, Pink Floyd,  etc.), but the Count really dug deep for things like the irrational international obscurities that perhaps never washed up on our shores during their initial release. 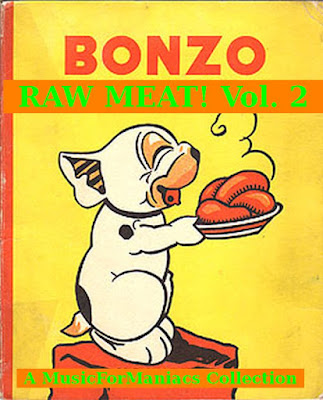 01 Duke Ellington - C Jam Blues [the otherwise thorough "Songs The Bonzos Taught Us" compilation did not include this 1942 basis for the Bonzos' "The Intro and The Outro"]
02 Dudley Moore - Psychedelic Baby
03 Stackridge - Do the Stanley [a non-LP single, this one from 1973 - my fave tune from these eclectic Brits]
04 Erkey Grant & The Eerwigs - I Can't Get Enough Of You [wish I could find some info on the loonies who released this 45, their one and only record]
05 The Purple Gang - The Sheik [this band's singer wore a mask, and claimed to be an actual wizard]
06 Liverpool Scene - Bat Poem [poets poet-isizing over rock; this bunch somewhat transmogrified into the Scaffold:]
07 Scaffold - Lily the Pink [this big UK hit featured Paul McCartney's brother Mike McGear; was a cleaned-up version of a filthy old drinking song]
08 Les Sauterelles - Where Have All The Flowers Gone [a Swiss piss-take on Pete Seeger's folk hit]
09 Os Mutantes - Chao de Estrelas [yes, the Brazilian 'Tropicalia' legends]
10 The Deviants - Garbage [a college radio show I'd listen to in the '80s would play this; was mighty surprised to learn how old it was: from these British anarchists' 1967 debut]
11 Tritons - Rock Around The Clock [continuing our world tour with some Italians...]
12 Grobschnitt - Sahara [...and Germans...]
13 Giles,Giles & Fripp - The Saga Of Rodney Toady - Part 1 [precursor to King Crimson...hold up, Robert Fripp had a sense of humor?!]
14 Giles,Giles & Fripp - She Is Loaded
15 Brian Eno - Dead Finks Don't Talk [this one often gets tagged a Bryan Ferry satire, but I dunno, sounds a bit Viv Stanshell-ish to me]
16 Roxy Music - Hula Kula [this loopy mock-Hawaiian instro was a non-LP 1973 b-side written by Phil Manzanera]
17 Alberto Y Lost Trios Paranoias - Follow the Guru [the hippie's often-shallow infatuation with/appropriation of Indian culture was just begging to be satirized]
18 Doggerel Bank - Finale [more poetry rock, from '73]
19 Quicksilver Messenger Service - Happy Trails [another antique cover: 'singing cowboy' Roy Rogers' theme, recorded by these San Franciscans in '68]

OK, this is really weird, but I can't download this one. My Norton keeps blocking it over and over, saying there is a "dangerous" file in it...it's gotta be Zippyshare doing something, but I've never run into a problem with the site. Anyone else having similar issues? Or, do you know if it's a false reading, and I should just force the download?

Damn, just tried downloading it and I got a similar message. Have no idea, but I'll look into it.

My download went a bit rotten and what I got was a file named "RAW MEAT! Vol 2 - an M4M collection.zip.part" which means the download was incomplete. I renamed the file giving it a ".zip" extender and it did unzip just fine, or so it seems. I played some of the mp3's with success. Whatever. Thanks for the great blog Mr Fab.

Hi! Please give me Zippyshare ,box doesn't work or broken...

Since everybody's detecting bad things attached to this compilation, but I downloaded it from Zippyshare with no trouble at all, I ran every file through an online service that tested them with 57 different anti-virus and malware programs, and there's nothing wrong with any of them! What's going on???

Box is telling me the file isn't there, or is "unavailable" to me.
I tried to comb through Norton to find the name of what it found (supposedly) in the Zippyshare file, but can't find it. I do remember the definition said it was used in phishing and identity theft, which is bizarre, because I've never had any hits on Zippyshare before!

Otto, it is a zippyshare issue: I tried uploading another album file that worked perfectly before and its giving me the same message.

Oleg & Sampoerna: try it now? I just checked on a couple different computers and it appears to be ok.

I used Box in some of my blog posts and I think I found that there is a secret file size limit, somewhere between 20MB and 30MB. The scoundrels. Since then I have used the free Google Drive to host my album downloads and haven't had any complaints from customers. So that's the one I recommend. There is a 10GB limit for my drive and should I hit that I will get another Gmail account and use it to get another Google Drive.

Thanks, Edifrey. May have to go the Google Drive route, I'll look into it. I checked out your Not Very Pretty Music blog and you have some great stuff there.

This immediately made me think of 1972's "Stuck in the MIddle with You" by Stealers Wheel, which has an amazing music video that can be found on YouTube

Yup. Couldn't make the BOX work at all, so found it on zippy; no problems there. -KingBee

One band that's VERY Bonzos but not mentioned here (apart from the obvious New Vaudville, The Alberts etc) are Captain Matchbox Band from Australia...and later solo stuff, like the first accordion old timey cover of God Save The Queen...

Hey Tim! Yes, the "By Jingo Its British Rubbish" comp feat. The Alberts and the temperance 7 I learned about from you I believe. Will deffo look for Capt Matchbox, thx.