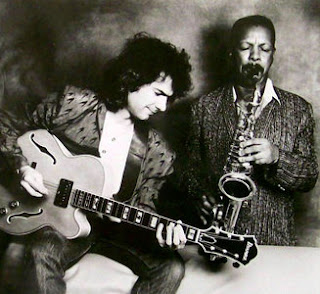 There's talented, there's influential, there's great...and then there are those at the top of Mt. Olympus whose cultural thunderbolts sent down from on high just change everything. And so it was with Ornette Coleman, who just died at age 85.

His 1960 album "Free Jazz" gave an entire genre of music it's name - how many other people can claim that? And that album (I'm listening to it now) is still thrilling, all these decades later.

Lou Reed said it was artists like Ornette that inspired "Sister Ray," which led to Sonic Youth and noise rock in general. Much of the '80s SST Records catalog - mainstays of college radio - owed a debt to Ornette.

Free jazz, especially in the hands of masters like Ornette, is not random noise. There is a method to the madness, as should be readily apparent here:

13 minutes from the "Song X" album that I first heard on the radio as an impressionable youth upon its release in 1986. It completely rewired my brain. And I thought I didn't like jazz. But I thought, "Well, this is kinda interesting," so I didn't turn it off. Then I turned the volume up a bit...and then some more. By the end of the track I was sitting up, blasting it, jaw dropped.

Coleman recorded it with Pat Methany, then mainly known for his "smooth jazz." A friend of mine who worked at Tower Records says confused Methany fans would return the album back to the store, expressing their disgruntlement. Ha! Methany did amazing things on that album, making his guitar sound like an exploding synthesizer.

The great bassist Charlie Haden, Ornette's right hand man for decades, died last year. I have plenty of his albums, too. Really dig his L.A. noir stuff with Quartet West.

Talking of recently deceased titans whose like we won't see again, how about the irreplaceable Sir Christopher Lee? Not normally associated with music, despite an initial desire to become an opera singer rather than a movie star, and a peculiarly belated foray into heavy metal starting at the age of 88, he did sing the odd song or two, often in very strange contexts - example below!

Rest in peace, Sir Christopher. You've earned it. This has to be the first time in your entire career that you've convinced everybody you won't somehow turn out not be dead if they want to make a sequel. I hope all you maniacs will treat this is a solemn memorial to the dear departed, and join in the chorus in an appropriately reverential fashion:

ah Mr Fab!! incredible Metheny-Coleman...this one i didn´t know, thanks for the guidance...