By request, "America's Most Nonsensical Band," The Korn Kobblers", are back on-line. This time using Google Drive, the latest candidate in my search for a good file-sharing platform. For those of you keeping score at home: Rapidshare and Div-Share are no more, Mediafire removed all of my files, Zippyshare suddenly decided to stop being cooperative, and when I tried The Box, it got mixed reviews from you-all. So the most recent posts have been using Google Drive. Yay or nay? 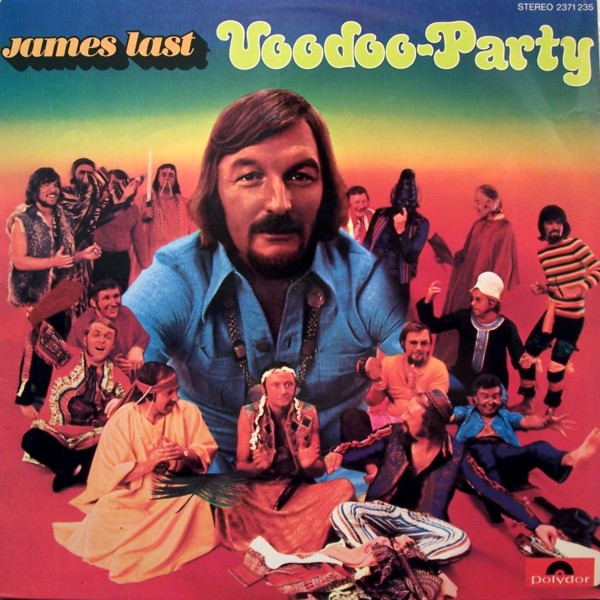 The Grim Reaper has been a busy mutha lately, hasn't he? Ornette Coleman, Christopher Lee, and now apparently we've seen the last of James Last. The German E-Z maestro has been a familiar face in the bargain bins for years, but one of his albums is actually quite sought-after by record collectors, and no wonder - it's the weirdest thing he did, and the most out-there album by a supposedly easy-listening artist since the 101 Strings infamous "Astro-Sounds From Beyond The Year 2000" space-age extravaganza.

"Voodoo Party" is a strange beast of no known musical genre, which is quite an admirable feat in itself. Covers of such non-EZ artists as Sly & The Family Stone and Marvin Gaye are mixed with originals, almost all smothered in tons of manic percussion. And then amidst all the bongo fury, there's "Mr. Giant Man," which has to be the greatest children's '70s glam rock stomper ever. It all leads up to "Voodoo Ladys Love," a kitch-adelic spectacular that has to be heard to be believed.

Far too upbeat and loud to be exotica, too brass-band/schalger to be rock-n-roll, "Voodoo Party" may not have much to do with any African-derived Haitian religions, but it certainly is a party. Funky funk! Moogy Moogs! Santana covers! EZ vocal choirs! And a version of "Babalu" that Ricky Ricardo would not recognize. R.I.P. Herr Last. 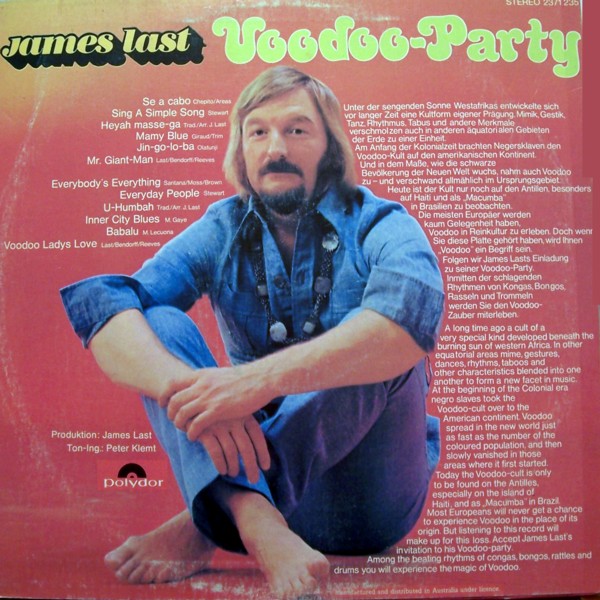 Check this vid of Last, draining the life from Hawkwind's 'silver machine' among a medley of Glam classics:
https://youtu.be/g503fR3BvVk

Indeed Johnny, 'twas the success I've had dl-ing stuff from your great blog Die Or DIY that was one of the reasons I considered using Google Drive (along w/reader suggestions).

Yep, James' medleys containing rock songs could be goofy fun (I included some on my "Oktoberfest A-Go-Go" collection, now off-line, of course.) The goofiness of "Silver Machine" is built in, but still, Last's version was the nuttiest until William Shatner's came out a few years ago.

Woah! The Shat did Silver Machine? I didn't know that!

That Hawkwind/Bolan/Cooper medley appears on Last's Non-Stop Dancing '73.
I bought mine from some chap in Germany for half a mark (but it cost nearly the price of a new LP to ship it to me).
RIP Mr. Last!

A. This is awesome. Good lord.

B. Google Drive certainly works well for me, so thanks for using it.

Greetings from Vermont - Yes, G-Drive is the One...fast and direct...it took about 3 seconds to DL JLVP...Thanx !

Yes! Go Google Drive Go! Never had any trouble downloading from DIEORDIY2 and I think along with MEGA, it is the blogging future for file sharing. Speaking of blogging legend, Mr Zchivago, I came on the comments to give honourable mention to the Silver Machine performance, but I see he beat me to it!

Loathe him or love him (and for me the Silver Machine performance among other things, puts me in the latter camp) - very few people have had such global success and I like the fact you picked my favourite JL album to pay your respects (the entire non-stop dancing 73 of which the Hawkwind cover is part of the melody is pretty damned fine, as is the 1975 album Well Kept Secret AKA In Los Angeles - but overall, I would say Voodoo Party is JL at his wildest (actually, in recent years, the album has gained a cult following amongst the funk/afro-funk/disco DJs).

You have to be dead from the eyebrows up to not love the covers of Jin-Go-Lo-Ba, Everyday People and Inner City Blues and how can anyone not melt at Mr Giant Man?

PS> Can't remember if it is the Spanish issue, but one version of Voodoo Party has a really great album cover, much more Les Baxter in keeping with the "exotica" theme.