RAW MEAT: Other Mutts From The Bonzo Dog Band's Kennel

The Bonzo Dog Band were like Beatles for Maniacs - the great, wildly-innovative British band of the '60s. But the kind of surreal humor that the Bonzos trafficked in was actually fairly common in the hippie era. Many otherwise serious artists threw in a Bonzo-esque track on their albums - amidst the folk ballads and psych freak-outs, it was not uncommon to also slip in a whimsical novelty, a neo-vaudeville romp, a campy oldies cover,  rude/irreverent/satirical humor, old-timey jazz, and/or pop cultural references. Only the gang of Viv Stanshall, Neil Innes, Roger Ruskin Spear, Rodney Slater, Legs Larry Smith, et al, made such nonsense their full-time gig. 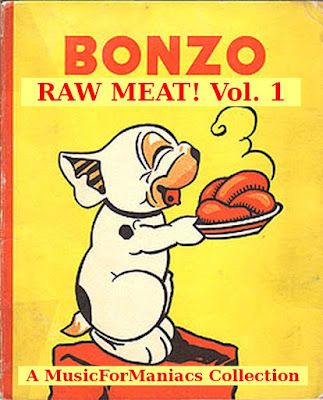 This side of the psych-to-prog era, of course, is scarcely mentioned in the usual rock history mythologies that emphasize Woodstock, increasing musical "sophistication," social consciousness, political/poetic lyrics, blah blah blah. Yes, that was part of it, but remember: the hippies were, after all, young people trying to have a good time. Y'know, rock 'n' roll? This ridiculousness is often far more entertaining and creative than many (most?) of the usual critical suspects from this era. Once again, I am...The Anti-Critic!

As the first 7 tracks demonstrate, bugs and animals were a popular theme (the Bonzos were named after a cartoon dog, after all.) The acts are mostly British, displaying the type of humor often described as "Python-esque," tho much of this predated Monty Python. It's just that good ol' Brit wit. The title of these collections is "Raw Meat" - any hardcore Bonzo fans catch the reference?

01 Zal Yanovsky - Hip Toad [1968, from co-founder of The Lovin Spoonful]
02 Peter Cook and Dudley Moore - The LS Bumble Bee [1967 single allegedly was the first record released explicitly referencing LSD]
03 The Peanut Butter Conspiracy - Flight Of The Psychedelic Bumble Bee
04 Can - Turtles Have Short Legs [non LP single from 1971 in which Damo Suzuki informs us that turtles have short legs, but not for the walking.]
05 Nitty Gritty Dirt Band - The Teddy Bear's Picnic [covering a century-old children's song]
06 White Noise - Here Comes The Fleas [this 1969 release by BBC Radiophonic Workshoppe refugees features Miss 'Dr Who' Theme Herself, Delia Derbyshire]
07 Cream - Pressed Rat and Warthog [don't worry, this isn't an Eric Clapton song]
08 Portsmouth Sinfonia - From the Nutcracker Suite Op. 71a - March (at the Royal Albert Hall) [Brian Eno once played clarinet in this, the "World's Worst Orchestra"]
09 Donovan - The Intergalactic Laxative [keep in mind whilst listening to this profanity that the singer was voted into the Rock n Roll Hall of Fame]
10 Lewis & Clarke Expedition - Everybody Loves a Fire
11 Private Eye - Take Off Your Clothes! [a John and Yoko parody; from a flexi that came with an issue of British humor magazine Private Eye]
12 Peter Sarstedt - Take Off Your Clothes [when I used to hear Dr Demento play this years ago, I didn't release how skeevy it really is]
13 The Pipkins - Gimme Dat Ding [a 1970 Top 10 hit on the UK/US charts from the bubblegum pop factory, not from a psych/prog band, so perhaps shouldn't be here cuz that's a whole other topic...but I inexplicably love this drivel]
14 The Monkees - Zilch
15 Fleetwood Mac - Somebody's Gonna Get Their Head Kicked In Tonight [this 1969 non LP b-side from an obviously pre-Buckingham/Nicks lineup of the Mac would become an early punk standard]
16 Pink Floyd - Corporal Clegg [The Floyd, years away from their 'Dark Side' breakthrough, once used kazoos. Kazoos and lasers. Something to think about.]
17 Small Faces - Lazy Sunday
18 Kevin Ayers & The Whole World - Hat [Well, the Bonzo's had a song called  "Shirt"...]
19 Pussy - Comets [Spacey theremin instrumental by, it should be noted, an all-male band; released in '69, of course]
20 you know their name - You Know My Name (Look Up the Number) [unreleased 6 minute version]

Thanks to Count Otto Black!

Don't stop at two volumes! It should be a 10 CD set with a pair of DVDs.

Thanks
Tom Wheeler
The Invertebrates

You're welcome, and I'd love to do more volumes Tom, but Count Otto and I are tapped out. For the moment at least. I'm sure we'll keep looking (and accepting suggestions).

many thanks for the ongoing musical madness

Masked Marauders-"Can't Get No Nookie"

Looks fan-dabby-dozee. Thanks a lot, both of you, from all of me.

I was going to comment on Volume 2, but it disappeared while I was typing the comment! Can I just say that I successfully downloaded Volume 2 shortly after it went up, and there's nothing wrong with any of the tracks. So presumably your original files are OK, and some kind of unpleasantness crept in later that had nothing to do with you.

well...this´s wondrous...no wonder it should come from you, thanks Mr Fab...

Thank you for this comp....it is a wonder! But I do have to contest the first instance of a distinct reference to LSD as I believe it is "LSD-25" by The Gamblers (available on the Surf/Hot Rod edition of Pebbles).A strange number that is nevertheless trumped by its flip "Moondog" in a style approximating the early surf instrumental scene with a dash of beatnik sauce to go with it!

This is such great fun. Many thanks. Link is dead now if you are of a mind to update it. So worthy of more volumes. Happy New Year!