Now up for your downloading pleasure, six (and counting) volumes of monstrous mix-tapes, perfect for these Halloween-y times we're living in. And what might their contents be? Compiler Cat A. Waller sez: "I'm afraid to say what's on them. Might get googled and busted. I'm kinda wimpy like that." Well, after checking out three volumes (so far) I can heartily recommend this witch's brew of vintage horror rock, more recent New Wave and novelty artists, and relevant sound (vampire?) bites and film dialogue, amongst other surprises. 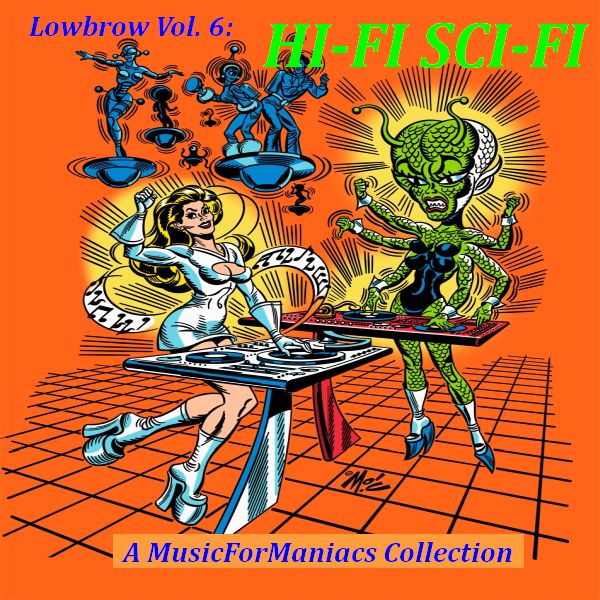 Still not enough for ya? "Hi-Fi Sci-Fi," the latest installment in our continuing exploration of mid-century arty-facts from the Golden Age of Cool, deals with every aspect of the fantastic: Outer Space! Monsters! Monsters from space! Not only is much of this stuff ripped from vinyl and, so far as I know, has not been compiled on other collections of vintage sleazy-listening sounds, but there's also a number of tracks recorded off of video: movie songs (and dialogue, sound fx, etc.) that were not released on record, but should have been. There will be more such movie musics in future volumes. So keep watching the skies!

Apart from the unknown garage rockers and novelty acts releasing 45s on regional labels, we also have a few big stars: Diana Ross & The Supremes, Bo Diddley, Louis Prima...and crooners. Crooners already rule, but when they sing straight-faced, sincere, utterly inappropriate 'love themes' to cheesy b-movies, they just get, er, 'rule-ier.' Bobby Rydell's finger-snappin' vocal version of "Telstar" must be heard to be believed. See also: "Journey to the Seventh Planet" on "Vol. 5".

01 The Crescendos - Countdown
02 Louis Prima - Fly Me To The Moon [from a private-press release by this king of Vegas lounge singers]
03 Gemini & The Planets - Copa City Promo, Miami, FL ["gyrating go-go girls dancing on a bed of nails"?!]
04 The Supremes - Dr. Goldfoot and the Bikini Machine [wouldn't it be nice to hear the oldies station play this theme song to a nutty Vincent Price film instead of "Baby Love" for the umpteenth time?]
05 Monty Johnson - Flying Saucers in the Air
06 The Sci-Fis - Science Friction
07 Ralph Young - Moon Doll [future half of very successful duo Sandler & Young croons the theme to "Nude On The Moon," a film about nudes on the moon.]
08 "Frankenstein Meets the Space Monster": Bob Crewe - Scramble All Jets
09 Big Maybelle - Egg Plant That Ate Chicago [rhythm and blues legend Maybelle recorded the original "Whole Lotta Shakin Goin On"; which is all well and good, but I prefer this]
10 "Annihilation"
11 "Beach Girls and the Monster" - suspense music [My title - like track 15, I don't know the names of the uncredited pieces of music]
12 Bo Diddley - Mummy Walk
13 "Evil Hand"
14 Frankie Avalon - Voyage to the Bottom of the Sea
15 "Beach Girls and the Monster" - spooky bongos
16  "Beach Girls and the Monster" Kinsley The Lion & Elaine Dupont - Monster In The Surf
17 Astronauts - The Hearse
18 Teddy and Darrel - Gary Ghoul Boy [pioneering campy gay humor]
19 "I am Robert Robot, mechanical man. Ride me and steer me, wherever you can"
20 Bent Bolt & The Nuts - The Mechanical Man
21 "HAL is Operational"
22 Ray Cathode - Waltz In Orbit [featuring a pre-Beatles George Martin!]
23 Buchanan & Goodman - Frankenstein of '59
24 Carl Douglas - Witchfinder General [yep, the "Kung Fu Fighting" guy; I literally did LOL listening to this one]
25 "Werewolf in A Girl's Dormitory": Marilyn Stewart/ Frank Owens - Ghoul in School
26 Frankie Stein and his Ghouls - Three Little Weirds [This sounds like it may be the song "Jerk" from "Lowbrow Vol. 2," only w/added crazy sound fx]
27 Bobby Rydell - Telstar [This song had lyrics? Believe it or don't! The vocal version was often called "Magic Star."]
28 "Frankenstein Meets the Space Monster" - capture of the earth women
29 Travis Wammack - Theres A UFO Up There
30 Orange Groove - A Bad Trip Back to '69 [I think this song appears on the 101 Strings album "Astro-sounds": probably more budget label shenanigans, like track 26]
31 Lex de Azevedo / Doug Stewart - Zero Population [An ultra-conservative's idea of a dystopian future, from "Saturdays Warrior," a Mormon rock-opera - yes, there really was such a thing. Lex de Azevedo had a long career w/Capital records, releasing the Mrs Miller albums!]
32 Charleton Heston - "Soylent_Green"
33 Columbia Playtime Orchestra - "Rocket Ranger Song"
34 David Rose - Forbidden Planet [The man behind the huge hit "The Stripper" is a long way from the burly-q house here]
35 Count Chocula, Frankenberry, and Boo Berry - Monster Adventures In Outer Space

thanks for the post, nice and weird!
Can you point me to lowbrow vol 2? I can't seem to find it.

I thought I linked to a link? Is there a Darwinian missing link? Voila:
http://musicformaniacs.blogspot.com/2015/01/voodoo-dance-doll-1950s60s-rocknroll.html

FUN FACT: "One of his [Fred Katz's] most recognizable pieces of music was his score for the 1959 film A Bucket of Blood, directed by Roger Corman, as the music appeared in a total of seven Corman films, including The Wasp Woman (1959) and Creature from the Haunted Sea (1961). According to Mark Thomas McGee, author of Roger Corman: The Best of the Cheap Acts, each time Katz was called upon to write music for Corman, Katz sold the same score as if it were new music. Katz explained that his music for Corman's The Little Shop of Horrors was created by a music editor piecing together selections from other soundtracks that he had produced for Corman."

Freddie, that is funny. I read Corman's memoirs and dont remember that. Perhaps he wasnt aware Katz was doing that..or didnt care. Figured: everyone will be focused on the monster, who's gonna notice the music?

But some of the uncredited music here, I think the track I call "spooky bongoes," has what sounds like a crazy teenage rock n roll band doing a Bo Diddley jam. Unlikely that that's production library music.

A little clarification re: Monstro Mixes...

Cat A. Waller may be reluctant to ID the contents publicly, but readers can rest assured that each tune is labeled with full title/artist info, and each volume includes "front cover" artwork.

And the contents are delightfully all over the map: Sparks, the Ran-Dells, Oingo Boingo, Lenny and the Squigtones, Ted Cassidy, Fats Waller, Heaven 17, Cheech and Chong, Dominic Frontiere, Boris Karloff, Grace Jones...

Forgot the link to Raumpatrouille. Episode 1

Great compilation, but track 32 seems to be defective.

Raumpatrouille! That reminds me - I've got a great collection of Raumpatrouille's composer Peter Thomas. Been meaning to post it.

Just played tr 32 and it worked fine for me. But you're not missing much, just a few seconds of Heston informing us that (spoiler alert!) Soylent Green is people. Which I'm sure you knew anyway.

Yay! Just in time for my Halloween party. It'll drive everyone crazy!