Speaking of Rodney Bingenheimer, had a very lovely request to re-up our hypothetical, theoretical "Rodney On The ROQ Vol 4" comp. Judging by the number of hits it has received, it appears to be one of this blog's most popular posts. (Don't forget, there's also a Vol 5.)  And now to continue our exploration of The Golden Age of Sleaze, witness this 1958 album: 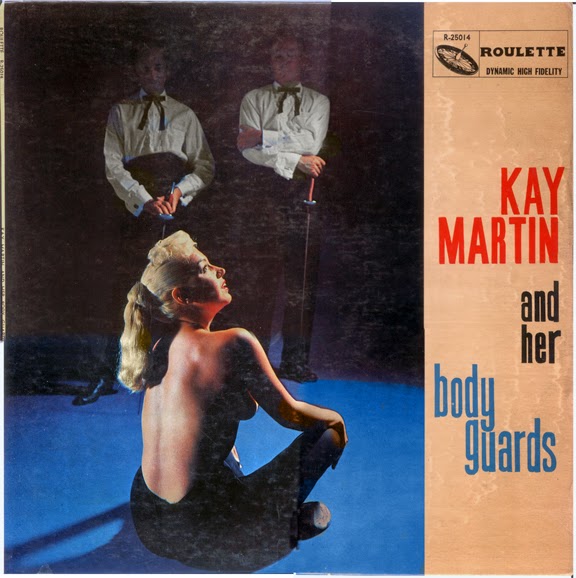 Kay Martin was not only a topless model, but a lounge performer. The perfect woman?!
Dig the kooky cover of "Blue Moon" a la The Champs' "Tequila," the rockabilly rumbler (with unexpected three-part harmonies towards the end) "I Ain't Mad At 'Chu," and a version of Gershwin's "Summertime" that sports the new-and-improved lyrics: "Your daddy's a flip and your mommy's a gasser."  If you were expecting something more Rusty Warren-ish and ribald, you may be surprised by such dark, weird, atmospheric gems as "The Heel," "Johnny Guitar" and the self-explanatory "Swamp Girl."  When she tries to play it straight on standards like "Sentimental Journey," it isn't too interesting - she sings  better than you'd expect, but not that well. Her enthusiastic Body Guards (rock that accordion!) chime in from time to time.

Kay Martin And Her Body Guards 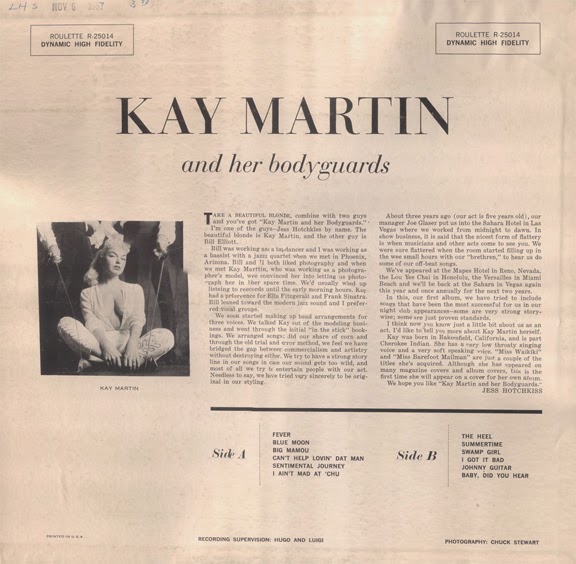 I have an old copy of Kay's Christmas LP< and have been looking and watching for this gem. Thank you kindly sir!

Thanks for the Kay Martin. Any chance for Bas Sheva? signed,
wishful

You are all most welcome. And wishful, are you referring to Les Baxters 'the passions'? I do have that one on vinyl. Im not familiar with any other Bas Sheva albums.

Hey, whatever happened to that Jane Birkin solo album I gave you? She can sing better than this, and whatever she's singing about in French, she does say the F-word the moment she lapses into English. And what about Brigitte Bardot? The first song on the album is a love-song to an enormous phallic motorcycle! And she can sing better than Jane Birkin. Also, she's wearing fewer clothes on her album cover than Kay Martin. In fact, having just listened to the track where she admits that she's sexually attracted to sunlight, closely followed by "Gang Gang", the lyrics of which are beyond my limited French, except that I do understand that she's the sexiest person ever, and she's turned on by random meaningless syllables... Let's have a naughty chanteuse next week!