Rodney On The ROQ vol. 4

It's the weekend!  It's summer!  It's almost July 4th!  Man, I just want some fun music right now. So let's set our wayback machine to the early '80s: we're gonna cruise around, turn on KROQ-FM, eat Oki Dogs, go to that liquor store where they never card the under-aged, drink, puke, and crank up Rodney. 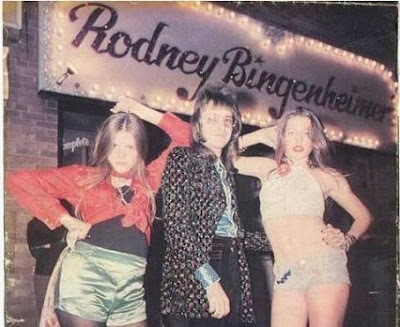 You don't need me to tell you about the legendary freeform radio dj Rodney Bingenheimer. He's often been called John Peel of America, but after seeing his bio-doc film "The Mayor of The Sunset Strip", he reminded me more of Andy Warhol - quiet, shy, surrounded by superstars but kind of in his own world.  A genuinely strange person, but, as much as anyone, helped drag American culture out of it's "malaise" (as Jimmy Carter called it). He not only played the Ramones before New York radio, he played (and interviewed over the phone) the Sex Pistols when UK radio couldn't (they were banned), and countless other alterna-stars and obscurities when the rest of commerical radio was still mired in The Eagles, Led Zep, Debby Boone and disco.  He now has a star on Hollywood Blvd.

Which is all well and good, but why this all matters to me is the fact that discovering Rodney's show (and, to a lesser extant, KROQ in general) made me a music fan.  Yep, it was (almost) as simple as that.  I liked my hippie big sister's Beatles records, the novelty music Dr Demento played, and my mom's Johnny Cash records.  But, generally, I thought modern music was mostly stupid Van Halen and Kiss nonsense. Post-Rodney, I became an avid radio listener, started buying records, talked music with my friends, reading reviews, etc... It was a thrilling time that you can't really understand unless you have ever lived in a time or place where there was little alternative culture, and suddenly, there was.  So, thanks Rodney!

Is this a nostalgia trip, where I sigh and say wistfully about how "innocent" it all was?  Hell, no. Listening to these songs again, sometimes for the first time in years, I'm struck by how decadent and depraved so much of it was. And to think that I would listen to stuff like Kim Fowley's evil-sounding "Invasion of The Polaroid People," or songs with titles like "I Want To Be A Prostitute," and it didn't faze me at all. This was my youth? When was I ever innocent? L.A. (America?  The world?) was a dirtier, smoggier, more crime-ridden,  immoral, and politically corrupt place then it is now. We thought Ronnie was gonna start World War III. And it's all in these grooves.

In the early '80s, Rodney compiled three albums for Posh Boy records that have been featured all over the internets (Look! This nice person posted all of 'em).  They spread the gospel of the enormous SoCal scene far beyond KROQ's signal, and, thus became vastly influential to zillions of kids who maybe knew about, say, Patti Smith or the B52s but had no idea how widespread, diverse, and hardcore the rock underground had become. Here then is a theoretical hypothetical fourth volume.

What you won't find here: the famous groups, songs from the previous Rodney comps, or much hardcore punk, since that's been amply covered elsewhere (I'm pretty sure you all know what Black Flag sounds like.)  This is more like a typical Rodney show, where he'd throw in unfashionable oldies (e.g.: early '60s surf), novelties and avant-weirdness amidst the power-pop and punk. From local private-pressings to foreign imports. So much stuff that, in those pre-internet days, you simply couldn't hear anywhere else. It was difficult to find some of these records in the shops. Keep in mind, KROQ wasn't some little college station, but a commercial outlet with a strong signal and high ratings, reaching millions of people. One of those interesting moments in culture when the radical was actually kinda cool and trendy for a while.
[UPDATE 8/27/14: new download link:]
Rodney On The ROQ vol. 4

01 Let's Go to the Beach - The Gears
02 The Cramps - Do The Clam [Rodney played the entirety of a Cramps live album when he heard that Lux Interior had died.  He hadn't. Oops. But I taped the album off the radio, and discovered this great Elvis cover.]
03 The Monkey's Uncle - Annette & The Beach Boys [Rodney played '60s beach party movie queen Annette Funicello so much on his show that Red Cross/Redd Kross were inspired to write their classic "Annette's Got The Hits"]
04 Summer Fun - The Barracudas
05 Are There Any Girls Here? - Rodney Bingenheimer
06 Riboflavin-flavored, Non-carbinated, Polyunsaturated Blood - 45 Grave [This number, featuring The Germs' Don Bolles (see track 14) would get played every Halloween. Boy, was I surprised when I walked into a thrift store one day in the '90s and saw this album - I had assumed that this song was a 45 Grave original]
07 Romeo's Distress - Christian Death ["death-rock" we used to call this kinda thing, before "goth" became a popular term]
08 Velvet Goldmine - David Bowie [a "Ziggy"-era UK-only b-side; were it not for Rodney I would have had no idea that this record existed]
09 Invasion of The Polaroid People - Kim Fowley [cool music backing by Rich La Bonté]
10 The Human Chicken - The Dancing Did [I always heard Rodney calling these guys "The Dancing Dead," and thought that that was such a good band name; only when doing research for this post did I discover this band's true name!]
11 I'm in Love With a German Filmstar - The Passions [when Rodney would play this, he would say: "I AM in love with a German filmstar - Nastassja Kinski!";  a bandmate of a pre-Clash Joe Strummer in The 101ers was in this group.]
12 Robot (7" Mix) - The Plastics [This catchy bit of Japanese techno-pop is the first song I remember hearing on Rodney's show, a true wtf? moment]
13 I Want To Be A Prostitute- Alisa
14 My Tunnel - The Germs [an unreleased demo that I remember taping off the radio back in the day; this killer song didn't get an official release until the '90s.]
15 Mohawk Man - Mr. Epp And The Calculations [funny how the hardcore scene had already become fodder for parody by the time this came out in '82; features future Mudhoney members]
16 Oki Dogs - Youth Gone Mad [Ah, Oki Dogs...two weiners, pastrami, wrapped in a chili-filled tortilla; I had one for the first time in 20 years at Cine-Family's Post-Punk Junk film fest last year. SO good.]
17 Kinky Boots - Patrick Macnee & Honor Blackman [Celebrities singing badly! From the great '60s tv show "The Avengers]"
18 Are There Any Girls Here? - Rodney Bingenheimer
19 Foolish Girl - The Mo-dettes [Rodney sure loved the ladies - no shortage of female performers featured on his show]
20 Richard Hung Himself - D.I. [a few more death-rockers]
21 Death On The Elevator - Super Heroines
22 Skeletons - Inflatable Boy Clams
23 Randy Scouse Git - The Monkees [I seem to recall one night Rodney played every song the Monkees recorded...in alphabetical order]
24 American Society - Eddie and the Subtitles
25 Satan's Stomp - The Flesh Eaters
26 Lets Make the Scene -  Rodney Bingenheimer [I think a pre-hair metal Lita Ford, still a Runaway, did the music, but can't find confirmation]

I saw Rodney mc a Blondie show 5 years ago or so.  He pretty much looked the same. I might do a vol. 5, but does anyone have The Ventures version of "Surfin and Spying"?

I can help you out there...

It's the LEAST I can do to show my appreciation for all of your GREAT shares!!!

Wow, thanks! My readers are totally rad. That song only came out on a 45, then as a bonus track on a '90s reissue of "Surfin'," both of which I havent been able to track down, even on Amazon/the internets. I do have the GoGos excellent version on 45.

L9 you are definitly no square L7 - your radnesss has only grown exponentially. I have the orig version of "Surfin" and knew that the '90s re-ish had bonus tracks, but didn't know there were THAT many bonuses. Can't thank you enough, good sir/madam.

That's wonderful, Mr. Fab!
I sure love these Rodney/ROQ tapes!
Reminds me of a schoolmate chum in high school who had a bunch of them when he moved up here and would frequently go down to visit relatives and would bring back more tapes of LA radio and occasionally another Rodney tape.

*smacks head* Rich, I meant to thank you in my post for the little Rodney spoken bits - I got them from your fine killuglyradio site, and ubuweb. So...thanks!

This is one of the greatest compilations ever created by man, woman, or beast. Thank you for making it.

Now that is the kind of comment that warms a blogger's soul, thx Anon!

This amazing compilation has had its link removed - any chance of a re-up??

Great stuff. Brings back a lot of memories!

Thanks. long. loooong time Cramps fan and just found yer site.I'm gonna be here awhile there's some great stuff here. thanks also for updating the links I haven't found a bad one yet.It takes some of us some time to find a groovy site like this. Stay Sick, Turn Blue

Thanks for re-upping the comp. So good.

Thanks for refreshing the link and including that Super Heroines track. I wore the grooves out of that Hell Comes To Your House compilation, which I bought because Rodney played it.

A blast from the past! Posh just posted this on my Facebook page. Always glad to see what damage Invasion of the Polaroid People did! I'll repost to Kim and Alisa. New stuff from me at www.flatdisk.net

Wow, great to hear from you Mr. La Bonte! I've actually checked out your site before and really liked some of those other tracks you posted, "Night Train to Albany" being a particular favorite.

By Alisa do you mean the the Alisa who did "I Want To Be A Prostitute"? Because I spent 99 cents to download it off Amazon and it was clearly just ripped from (scratchy) vinyl, so wondered if it was a bootleg.

Kim is not well and doesn't allow posting to his FB page. I know he'd be glad he was included (if he hasn't already seen yer blog.)

Rodney was/is great! Thanx for this posting. I, too taped ROTR several times & had the privilege of meeting him about 8 times over the years. (Funny how he can never remember who I am...) I still have my recordings, what about you?