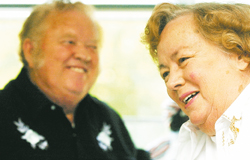 "Lawtone" sounds like a doo-wop group of lawyers, The Lawtones. And wouldn't THAT be fun?

Edited your comment:
"Whether you find this depressing, hilarious, pathetic, wonderful or a bit of all-of-the-above, you must admit that Bobby & Jackie appear to be having a more rewarding life...

Sure beats sitting in the glow of the LCD screen offering up stolen copies of other artists work. No?

I wonder how offended you are going to feel when the dawn of your 50's kicks in and the young-un's are fucking goofing on *you* I hope you live to 99.

This is the sort of stuff Irwin Chusid used to thive on with his show Atrocious Music on WFMU. Then he outed himself as a card carrying conservative right wing apologist. Then it all made sense why he enjoyed doing that show.

You are incorrect - Irwin's show was called "Incorrect Music." Oh, how I miss it.

In response to "'Lawtone' sounds like a doo-wop group of lawyers, The Lawtones. And wouldn't THAT be fun?" -- may we humbly submit that it would indeed be a great deal of fun. Thank you.

Wow, there really is! As someone who works in a law office, I actually get those refernces and want to check this stuff out.

All of that is a lie. Jackie Gershwin and Bobby Joe Ryman were never married.
She just wanted to be...

Bobby Joe Ryman and Jackie Gershwin were never married. She always wanted to be but he found her to be a motherly type instead of a lover....

wonder why she told this big lie about them being married? Guess she was wishing so hard for it to come true...