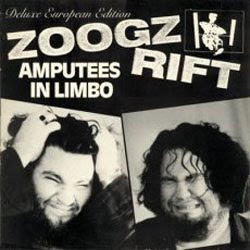 Read THIS first! (If you haven't already.)

Proceeding chronologically, here's a collection from 1982 that kicks off with Zoogz screaming "I'm having a heart attack!" over a '60s Vox organ rocker that sounds like a psychotic version of ? & The Mysterions' "96 Tears." Then: an atonal dismantling of Iron Butterfly's "Inna Gadda Davida;" a sax-led instro in 5/4 time featuring some truly warped guitar mayhem; "Evil Eye" is reggae (!) w/frightened lyrics; "Buffy & Jody" obscenely defiles sitcom characters; "My Daddy Works For The Secret Marines" is one of my faves, due to it's distorted funk groove. "Searchin' For Clams Under The Glass Bottom Boat" is an instro duet for vibes and sax. He loses me with some free-improv/noise messes towards the end, but brings it all back home with an attack on an "Art Band"...but isn't Zoogz an art-rocker? If not, then what is an 'art band?'

Another of the more accessible (tho still with grotesque moments), and successful, outings from Mr Rift And His Amazing Shitheads.

Many thanks for dragging the works of this warped genius back into the light Mr Fab.
Zoogz, (Mr Rift?), is a musical idjit-savant, the clumsy child-man genius should have been a star, but his quirky toilet humour and paranoia tinged music was just too far from the hateful mainstream for the masses.
It's a damn shame that he resides in obscurity whilst the banal parade of interchangeable made-for-mass-consumption clones clog the airwaves with their lowest-common-denominator saccharine whimsy.
We need insurrectionists of his like now more than ever.
So i salute you Mr Fab for daring to delight, educate and shock your listeners with the works of the liquid momo.
I've got my fingers crossed that you'll post some stuff i don't have soon, so thanks in advance.
Can you smell my genitals from there?
Rowdy Roddy

Unfortunately, I don't really have many rarities (e.g.: his cassette-only releases), just the SST stuff and a few others. If anyone does tho, feel free to pass 'em my way...

It's the Zoogz Rift classic, I guess, and the only one I have. The previous LP you posted was brilliant. Thanks.