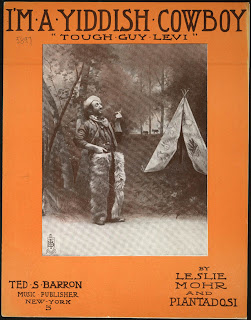 "The most offensive album ever made!"

Well, don't know about that, but "Jewface", a various-artists collection of vintage recordings, certainly is one Jewish stereotype after another, many seemingly perpetrated by Jewish performers themselves. These antiques, some dating back to 1905, were part of the ethnic stereotype humor that was wildly popular in the early days of recording. Apart from blackface minstrel shows (hence the album title) there was German, Irish, Italian, you-name-it, all performed with exaggerated accents and broad humor.

Some of these songs, like "When Mose With His Nose Leads The Band," are funny, but not in the way it's creator's intended - it's because they're just so awful! It's hard to believe this was mainstream American entertainment and that times have changed so much. But I don't think too many people will really be offended - it's all so good-natured and innocent, and we can't really judge the past by today's standards. And besides, this is such a fun tune:

Johnny Rebel: "Stand Up and Be Counted"

Thanks to Spacebrother Greg for the Rebel yell (I don't even want to know where you got it!)

My question about the Jewface album. The track posted has an announcement at the beginning about Edison Records. I have numerous sides from that era with that voice doing the intro and always wondered if that voice was in the original recording or if it was added at some later date when they were cleaned up to improve the quality.

No, those announcements are part of the original recording. It was thought that music suddenly beginning on a record without an announcement would be too disturbing to listeners new to the wonders of the gramaphone.

Thanks for the answer. Guess it was the birth of the DJ.

Hi Fab, Actually I think the reason for the introduction was that most people were not literate and could not read a label. This way there was no doubt about artist, title or label.

This may also have been done as a primitive form of bootleg-prevention!

"Jewface" is a pretty standard collection, IMO, but benefits by having a scholarly booklet. I think there were worse songs decades later...some of the Spike Jones Jewish dialect numbers in the 50's (a parody of Tennessee Waltz was particularly heavy on the nasal accents) and a few Mickey Katz numbers that probably had 'em laughing hardest in Aryan Supremacy basements.

"Jewface" of course concentrates on Novelty songs, while that era's biggest successes were monologues by Monroe Silver, Joe Hayman and perhaps the real "Jewface," Joe Welch, who somehow got himself arrested for his hilarious if offensive on-stage demeanor (and was acquitted by the most obvious defense...how could be be race-baiting or belittling Jews when he was Jewish himself).

But if they couldn't read, how would they know what record to buy?

Excellent comments, ill folks. Re: Mickey Katz, his recordings may have been stereotypical, but they were laced with so many unfamiliar (to me) Yiddish terms, I don't know what he's talking about half the time.

Wow...the KKK song gave me chills in the first 20 seconds!