L. RON HUBBARD SPLURGES ALL OVER YOU

"Force yourself to smile and you’ll soon stop frowning. 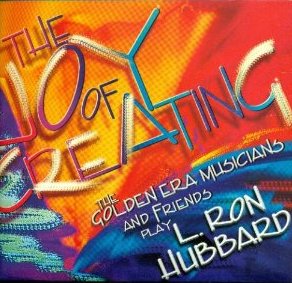 Force yourself to laugh and you’ll soon find something to laugh about. Wax enthusiastic and you’ll very soon feel so. A being causes his own feelings. The greatest joy there is in life is creating. Splurge on it!"

If you don't have those words memorized, you will, after hearing them repeated over and over on this ghastly 2001 album released by the Church of Scientology, voiced by a semi-all-star team of singers. It sets the poems of the cult's late founder L. Ron Hubbard over crappy music that sounds way too dated to have been recorded only 12 years ago.  I genuinely figured this was from the mid-'90s at the latest. So what's it's all about, Alfie?

- We kick things off with an intro from soul legend Isaac Hayes, who unfortunately only has a couple of quick cameos on this album. Hearing Hayes' trademark baritone speaking voice trying to give this drivel a bit of gravitas is pretty great - as funny as his "South Park" work.
- Anyone who thinks joining Scientology will give your showbiz career a boost should ask "fresh new singer" Shannon Star Roberts, or L.J. Jackson - this album is their sole Discogs credit. One of Roberts' boring songs references Scientology mythology: "Theta, Theta, See You Later." Catchy, eh?
- Carl Anderson apparently was one of the original stars of "Jesus Christ Superstar" and had some pop hit in the '80s "that endeared him to soap-opera fans" (gee, wonder why I never heard of him?); one of his two songs here is a mindbogglingly awful 16-minutes long. Two minutes would be bad enough, but, holy hell, sixteen interminable minutes? He should be shot! Oh wait, he died of an illness a few years after this album. Never mind.
- I always respected Doug E. Fresh as a hip-hop pioneer who recorded the classic single "The Show"/"La Di Da Di." But one of the low-lights of this album is the appalling apocalypse fantasy "We're Going Up While The World Goes Down," which Fresh futilely tries to pump up into a wave-your-hands jam despite lyrics like:
"I was in a Safeway row
of housewives and no chow
Who said they'd been forsaken
by even moldy bacon
The manager's cruel cry
Was the actual why
They'd ate up all the animals
And now must turn to cannibals"
Apart from retarded grammar ("The manager's cruel cry Was the actual why"?!?) Hubbard's attitude of: you're-all-gonna-suffer-and-die-but-we-won't-ha-ha! is hideously immoral for someone claiming to be a spiritual leader. It reminds me of the Xian fundies' 'rapture' fetish. Needless to say, the generic music has gone thru the Scientology washing-machine, bleaching out any chance of black funkiness.
- Someone named Pamela Falcon has the thankless task of translating one of Hubbard's free-verse poems into music, to whit: "CUPIDITY/Cunning mind/Which unnerves the eye/Unclean lancet." Come on everybody, sing along!
- Another low-light: albino blues-rocker Edgar Winter is one of those well-known figures I'd never really had an opinion on one way or another. Well, I have one now: I fuckin' hate him! His "The Joy of Creating" begins with him saying "Y'all know about the joy of creation? Well, this is how we do it down in Texas." He then proceeds to insult the entire Lone Star State with hysterical gurglings that pass for singing over pseudo-enthusiastic music that has all the soul of John Tesh. I have a hard time having much respect for someone  who would allow this abortion to be released under his name, with his consent, while calling himself an artist.
- Chick Corea, the guy who contributes the only boring parts to otherwise-classic Miles Davis albums, drops by with under two minutes of pointless piano noodling and recitation.

A former Scientologist known on-line as Tiger Lily wrote on an ex-Scientologist message board: "At the time I was in, those albums were touted as being so theta-infused that just listening to them was supposed to key you out. They had the songs on their phone system "hold", and played them in the lobby over and over (how the staff stood that I'll never know).

I took that to heart and listened whenever I could. I lived 2 hours from the Org so I would listen to those *&^%$%# things for 4 hours on course days trying to internalize them. I memorized all the words. I sang along.

I remember thinking it was pretty cheesy , but they told us that Ron's music was way ahead of it's time, so I just decided I must be stuck in the 70's or something and made myself like it."

Listen to the "way ahead of it's time" music here:

The Golden Era Musicians and Friends "The Joy of Creating"

Heya Fab, it's me, Todd! Great review, but gotta say that this genuinely had me LOL-ing out loud: "Edgar Winter is one of those well-known figures I'd never really had an opinion on one way or another. Well, I have one now: I fuckin' hate him!"

Thanks, but it's still not as funny as the album!

Senor Fab,
Have you heard the odious, star-studded L. Ron ('and Friends') album Road to Freedom?
It's even got a few songs sung by Hubbard himself. It's just as rotten as you'd expect.
Contact me if you want to hear it.

Yes, sadly, I have heard it - don't have a copy of it, but heard it streaming on the inter-webs somewhere. Oh yes, i wrote about it in this post (down at the bottom):
http://musicformaniacs.blogspot.com/2011/02/goings-on-about-web.html

All well and good but, yep, I think the time has come to get my own copy, thanks Rich!

I see the link to LRH's The Joy of Creating is down - sinister Scientological plot to rid the inter-web of the more embarrassing moments of 'way ahead of its time' Hubbard muzak - or no-one grabbing it for the last 30 days - you decide!

But fear not, while searching for his 1982 Space Jazz opus, I finally found a working link to the aforementioned album as well as this and a few others courtesy of the rather splendid Willard's Wormholes Son of Readers Posts:

L. Ron Hubbard And Friends The Road To Freedom (320)
https://mega.co.nz/#!1xdhUDqZ!cmNtn4BNc3aHfQKwfFruwerxN37m0vspZzuDWI5uV8M

Actually, the weirdest Hubbard audio of all is the 1952 tape of what appears to be a seance where he and his wife are using the E-Meter to contact aliens - the audio can be heard here - it's nearly an hour long, but it is up there with the Jonestown tape for..well, you have to hear it:

Well that is just spectacular Mr Harvey, thank you so much for that. Did not know about the alien tape, what a find!