I'll be guest dj-ing once again this Sunday, 8pm PST on Spacebrother Greg's "Radio Misterioso," bringing up another batch of wild sounds that have mostly not been featured here. Listen live at http://killradio.org/ so you can call in and/or go on Greg's facebook page and leave comments 'n' stuff.

And now...on with the show: 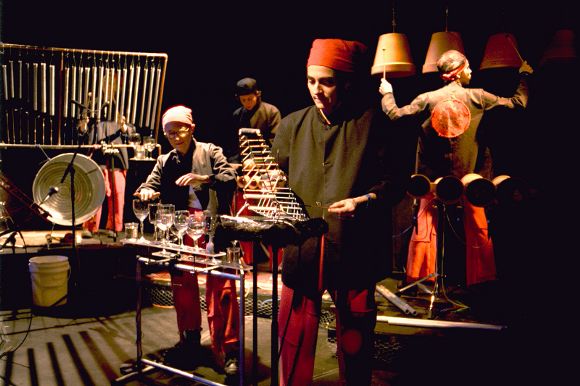 My recent posts about musicians who build their instruments out of junk reminded me of similiar artists I'd written about, whose songs posted ages had long since gone off-line.  I was also reminded of a recent single re-release, and miscellaneous records I'd had for years.

The Junkman - 'Beat The Can' [both from his album 'The Junkman 2," available from his site - the liner notes break down exactly what objects are used for each song] 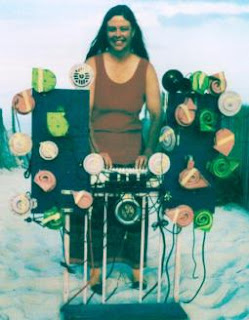 The Junkman - 'Drug Puppet' [bit of a Residents kinda thing going on here]
Electric Junkyard Gamelan - 'Bigbarp' [pictured above]
Car Music Project - 'Noodles'
Gamelan Son of Lion - 'Bang on a Tin Can'
Electric Junkyard Gamelan - 'Nutbutter Challenge'
The LA Drivers Union Por Por Group - 'Por Por Horn-To-Horn Fireworks'
Electric Junkyard Gamelan - 'Space Kitty' (excerpt)
Staff Benda Bilili - 'Sala Mosala'
Wendy Chambers - 'Star Spangled Banner' [on the legendary car-horn organ, pictured right]
Wendy Chambers - 'The Kitchen' [not only are kitchen implements used as instruments, but an actual meal is supposed to be prepared during the performance of this piece!]
The Junk Yard Band - 'The Word' [killer Def Jam single from the '80s - a group of children playing gogo funk from DC; that lead singer rivals the young Michael Jackson]
The Watts Little Angel Band - 'Nik Nak Paddy Wack' [same concept as The Junkyard Band, but from a decade prior; this must-have single, whose b-side is an oldies medley 'New Orleans/Land Of A 1000 Dances,' has recently been re-issued]

All of this had me thinking about Test Dept (none of whose music I can recall off the top of my head) and Einstürzende Neubauten (think I did like some of their stuff), two '80s bands whose use of found percussion was popular with the industrial crowd, as it was seen not only as a way to be real noisy, but to seem shocking and rebellious and what-not.

Also from the '80s: the L.A. band Savage Republic used things like an oil drum and a railroad tie - anyone else use junk percussion mixed with conventional instruments, in the service of actual songs? Think I read David Byrne saying that he and Eno played junk on "My Life In The Bush Of Ghosts."

And did the Bang On A Can group ever actually bang on cans?
Posted by Mr Fab at Wednesday, May 15, 2013

Off the top of my head, "Everybody's Got Something To Hide Except Me And My Monkey" used a bell of some kind, but I suppose that's not too out of the ordinary. I know that the brake drum is called for in some orchestral music. Of course, John Cage and Lou Harrison were doing found instrument music way before everyone else, but they didn't write any hits, either! I had a friend who played hubcaps. Suddenly I am immersed in noisy memories. Thanks again, Mr. Fab!

The brake drum! Yeah, Tom Waits used it on his "Swordfishtrombone" album. Come to think of it, he's probably used junk percussion quite a bit throughout his career.

That's a great one, Holly. Gotta get that album...

How 'bout Lothar and the Hand People's "Machines"?

I saw New York City anarchist punk/noise band "Missing Foundation" in the early 1990s, and they used oil drums (played with hammers, I think). They were followed by "Cop Shoot Cop" whose drummer had lots of metal junk to augment his set up.