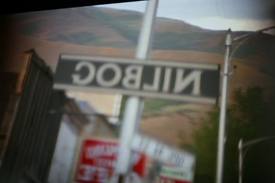 "nilbog" backwards is goblin!
Do I win the Cadillac?

I like this band (even though they don't appear to play ukuleles).

I was hoping someone would tell me - the suspense was killing me.

I like the idea of a horror soundtrack played on a ukulele. Is it remotely possible to play anything spooky on a ukulele? (a spooky uke?) That's like death-metal banjo, or goth yodeling.

So THAT'S what Bret has been up to all this time!

Ukulele could fit there, that would be interesting.

The Cabinet of Dr. Caligari
http://www.youtube.com/watch?v=T9WjHEKLMbc

I suppose you're aware that Goblin was an Italian band well known for the soundtrack recordings of Dario Argento's Suspiria, as well as many of his other films. Their LP "Roller" from 1975 was their first non-soundtrack album, and a great prog-rock release.