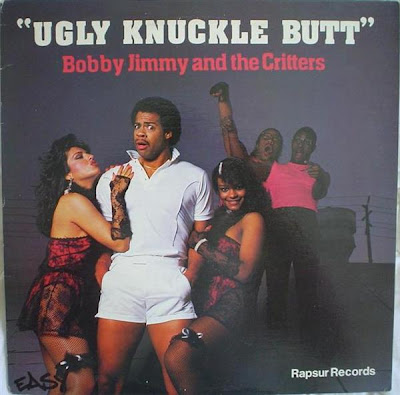 Thank you for this! Also, any idea who did the song "Roaches" to the tune of "Rumors"? Also, I propose a post dedicated specifically to 80s novelty rap records featuring Ronald Reagan impersonations.

Bobby Jimmy did indeed do "Roaches", and, yes I have a copy. I made a collection of '80s novelty rap a few years back called "Curl Activate" that featured Rich Little's "Reagan Rap," and I have Bonzo Goes to Washington (with Jerry Harrison) sampling Ronnie on "(We Begin Bombing In) 5 Minutes." But I DON'T have Gary Trudeau's "Rap Master Ronnie" by Doonesbury Break Crew, or Ron And The D.C. Crew's "Ronnies Rap." If I can find those (or some nice person can send 'em my way?), well, then, we think I just might have ourselves a sequel to "Curl Activate"...

Also there's "The Contra Rap," featuring a full cast of political impersonations. Is either of the ones you mentioned the one about the 1984 re-election campaign's efforts to appeal to black voters, that has the chorus "We want Ron / The cat can swing / He's the man / Who's often seen at Burger King"?

never mind, i do have "Rap Master Ronnie". Just listened to it, and yep, that's the one with the Burger King line. And: "Got an open mind on civil rights/ My youngest son grew up in tights."

Looked up 'Contra Rap' - all voices by Rich Little, apparently. Listened to it on YouTube, pretty good, gotta find that one now. Thanks for the tips, chuck.

Dear mr Fab, I just love your wide and eclectic tastes. You keep satisfying my permanent curiosity for all sorts of "organised" sounds.
You made me remember I have an album by Bobby Jimmy with the single "Hair or wig", izzit?

Thank you, Bobby is very successful here in Brazil until today. I'm addicted to rap states.


Brazil's rap is not good.

LINK IS DEAD. LOVE YOUR BLOG!!!