Behold, the Daxophone! The FUNNIEST Instrument Ever?!?

The late, great Hans Reichel gets a lot of props in the modern jazz world for his guitar playing, which is all well and good, but Maniacs should proceed directly to the few recordings he made highlighting his invention, the hand-crafted wooden objects known as Daxophones. Imagine a school kid bending his ruler over his desk making a boing! sound, only played with a violin or cello bow. In the hands of Reichel, a master musician as well as inventor, the Dax is amazingly versatile, capable of all manner of sounds, often with cartoonish undercurrents. 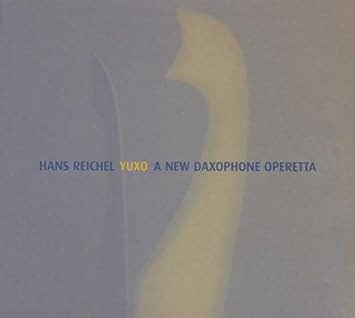 Reichel calls this album an 'operetta' even tho there are no singers. Indeed, there are no other instruments on this album besides the Daxophone. Yet the instrument has the uncanny ability to mimic human speech sound. Not only that, but the song "Bubu And His Friends" sounds like a whole barnyard of animals singing in harmony. Not only do these instruments sing, they swing, dad. These are not just weird noises for a chin-stroking avant-garde academic. "Street Song" is filled with hand-clapping joy. The percussion-heavy "You Can Dance With Me" reaches an almost Afro-Cuban level of danceable groove. And the catchy bubblegum rock of "Oway Oway" could convert the most brainwashed of mainstream music followers (well, in my fantasy world...)

Some songs suggest actual musical genres, like salsa, jazz or country, but played as if by Martians who, after picking up some terrestrial radio transmissions, attempt to interpret  the music of Earthlings on their alien instruments, tuned to no known scale. A wonderful work of weird genius. The fact that the name 'Hans Reichel' is not as well known as 'Kardashian' does not speak well for the human species, but we can start changing that right now:

You can also listen to/buy another great Daxophone album (along with a slew of his guitar releases) here:

This may be the most unlistenable thing you've ever posted. Not sure if I mean that as a compliment or not.

Snufmeg for the People said...

Huh ... actually, in contrast to Greg's comment, I found it to be quite listenable! Often, I find music which is described as "weird" to be some combination of trite, indulgent and desperate. Not so, this time; immediately likable! Thanks for introducing me to Herr Reichel ...

Hi, very cool things in this blog, a lot of discoveries, thanks a lot!
I build instruments since the year 00 and actually play some tribal percussive pieces on it with the "Why the eye" band in Brussels.

Check it, you may be interrested in it (?)
We are supposed to release an EP on vinyle on march/april 2016

Wonderful badger music, but difficult to find out how Mr. Reichel really performs it. This demo: https://www.youtube.com/watch?v=F0IZxu3OJt8 seems to show that the daxophone is monophonic, so Reichel must be doing a lot of multitracking and mixing.

Perhaps I identify with dachsophone (previous spelling) because of the dachshund (badger hound) who once mistook the back seat of a Volkswagen for a badger hole, and myself for a badger, so he grabbed me by the nose to drag me out of the hole. Totally correct dachshund technique, and musical in its own nasal growling way.

Thanks. I have a hard-copy of 'Shanghaied..' but don't have this one. For his wonderful work with self-built and modified guitars I'd recommend 'Coco Bolo Nights', whose treasures include 'Little Stick, Western Bullship' wherein a plucky but rusty old bathroom suite gets up to do 50s Chicago at a karaoke night. Good stuff.

Here's another sort of badger music, unconnected to Mr. Reichel's except in choice of animal: https://badgerland.bandcamp.com/

Really enjoyed the album! Very smooth and relaxing sounds and well crafted melodies. Reminds me of a bit of the residents conceptual stuff like "Eskimo" and "Not Available".

I couldn't imagine that just vibrating a wood can make a great tune! And if you're looking for a funnier intrument, check "Otamatone".