Zoogz Toozday returns with some re-up requests: the sick punk/jazz/prog of Zoogz Rifts' "Amputees In Limbo," "Island of Living Puke," and "Torment" are all back on-line. And if that still isn't enough scatological humor for ya, plug your nose and dive into this:

courtesy of reader Duke Kola, who sounds like a pretty cool grandpa. He writes: "I made this mix (with a couple of changes) a few years back for my pre-teen grandson. Never fails to bring a few smiles to my face regardless of how many times I listen."

Now this may seem like a somewhat dubious concept for a mix, but if you're gonna sing about such stuff, you've got to have: a) a sense of humor, and b) a lack of inhibitions, both of which are sterling qualities for an artist to possess. Not to mention the fact that you've pretty much thrown all commercial potential and radio play hopes out the window once you've gone down this path, another admirable move. And this is indeed a very entertaining listen, more so than I was expecting.

I personally would have added the Bonzo Dog Band's "The Strain," but I'm sure we all have our favorites. 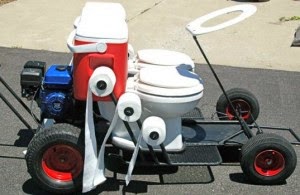 An extra for you: "Who Farted?" by The Vaughns. I think they're Australian - https://www.youtube.com/watch?v=2LAD6Im6jrA

Keep up the good toonz!

Thanks for the big belly laughs these tunes inspire.
My favorite track was number two! Lol!

And what about "I Love You So Much I Can't Shit" by Derek and Clive? Also, I think I'm right in saying that the scatological British comic Viz once released a single by one of its most popular characters, Johnny Fartpants.

Hi, I read this blog regularly and am Ernie Payne's son. It's crazy seeing this song on a blog, especially in a mix with the circle jerks, j geils, zappa and mojo nixon among others...anyway, great seeing this pop up on my feed and keep up the crazy good blog you got here. Cheers.
-AP

I regards of the Zoogz update.

Regardless, thanks for everything.

Holy crap, I attempted a similar concept a few months ago and am amused that you also included "Slurf Song": http://nisa.wikia.com/wiki/J._Lurg%27s_John_Jams

Another Australian classic - "Defecate On My Face" by TISM:

Though it might be repetitive for some MFM followers, I still miss the inclusion of Styx' "Plexiglass Toilet."

Too bad you didn't include comedy or spoken word tracks...Carlin, Lenny Bruce, Bukowski, Cheech & Chong, Pryor, Blowfly, etc...all have bits about this theme.