One of the first French-language rock groups was this intensely obscure band with a near-unsearcheable name.  Look up "Les Dauphins" and you'll get lots of French sites about actual dolphins. I did find one site in Russian that offered this brief blurb:
"Dolphins" - a group of French Algerian port city of Oran (Oran). Created brothers Gerard and Robert Shatelenami together with Alain Martin, Andre Castro and Gilbert Hullo. Existed in the years 1964-1966, longpleya not released, was 4 EP's, released via Columbia ... Almost all of the band's work has been collected in 1993 on this compilation. Vocals - exclusively in French." Thank you, Google Translate!

It's another curio from the days when non-Anglo-American cultures were grappling with the rock 'n' roll behemoth that had just washed up on their shores, and were struggling to find a way to integrate it into their culture. At least these guys didn't try to sing in English. But French just isn't a rock 'n' roll language, even when sung Elvis-style. Tho on one of the best songs here, the Isley Brothers-esque "Ne Pars Pas," they do sing the word 'baby' a lot. 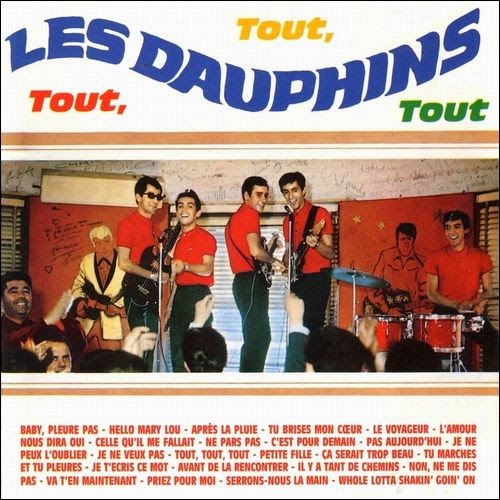 Look up "Les Dauphins" and you'll get lots of French sites about actual dolphins.

Heh. I looked up "Les Dauphins band" and did much better: the first hit was a weird post on a weirder blog called "Music for Maniacs."

But, I also found a video! Not clear what's up here, but I think that the criminals may be played by the band members.

You can also get a 4-song EP for a mere schmear 40 euros right here. Maybe just grab the sleeve image.

Non sequitur: Two days ago, I grabbed a wonderful file from Divshare, and then lost my ability to download from them. I go through the motions, get the message that, "Your download will start momentarily. If it doesn't, click here to try again," but no download. I tried signing up for the free level of service, and I could bypass the 15-second countdown, but still no files. Tried two different browsers. If anybody has tips about dodging Divshare glitches, I'd love to hear 'em.

Made all the more remarkable by the fact that Algeria has become EXTREMELY militantly Muslim, and you could literally be killed for playing rock (or just about any kind of music) now.

Was your problem divshare file from this site? If so, I can check to see if it's still up.

I'm having the same lack of success with the following 4 Musical Maniacal files on Divshare. I haven't used Divshare for anything sane that I can remember, so I can't compare. I had Divshare notify me that another Maniacal file was absent, and in these 4 cases it claims to be sending the files, but they never come. It might be a flaw in Divshare's interface.

Those aren't working for me, either. I'll try to get 'em up on zippyshare soon. (Guess divshare is mainly useful for individual tracks, not whole zipped collections)

Not a scoop...
Some precisions: lot of 60s french rock bands were from Algeria. (les Missiles for example) . At that time, it was a French colony. Lot of these musicians were French "pieds noirs" (and came from North african Jewish minorities). As you said Oran (and Algiers) was a port...like Liverpool...
Actually, Algeria isnot only a extremism musilm land...you could check this hardcore/punk band called Demokratia...

For a moment there, I thought I was getting careless, and Les Dauphins were infinitely weirder than I thought! Unfortunately, the very obscure (though by the look of this clip rather good) 1964 Italian thriller "Super Rapino a Milano" had nothing whatsoever to do with the band; this is just some guy on YouTube combining an old foreign film-clip with an interesting track. So that is not Les Dauphins playing masked machine-gun-wielding helicopter bandits with detachable heads, though undoubtedly it should have been.

Thanks for telling me this. I really did not know this about Les Dauphins, one of the best rocks bands. Even I was thinking to try it. Now I will remember the things that you have cleared to me. Thanks for this.