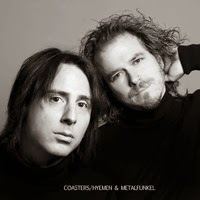 WFMU is hosting a battle-of-the-bands right now thru Feb. 4, and of the three finalists, I really like the hilarious Hyemen & Metalfunkel, who do spot-on parodies of heavy-metal classics as performed by Simon and Garfunkel. Their version of Black Sabbaths' "Paranoid" is one of the funniest things I've heard lately, but they also do justice to Van Halen, AC/DC, Iron Maiden, Judas Priest, etc.  It helps that I've always liked Simon and Garfunkel. Even tho I hate Paul Simon.  Odd, isn't it?  I guess I just really like S&G's vocal harmonies and that '60s folk-rock sound.  And they were young, which makes Simon's pretensions bearable, no different from any number of other earnest college students bullshitting in the dorm room.

Unfortunately, Hyemen & Metalfunkel are currently losing to a boring mainstream rock band, so do your patriotic duty, and vote your conscience.

Speaking of metal parodies, a reader recently wrote asking if Metalachi, the Los Angeles combo who play metal classics in a Mexican mariachi style, have an album out yet.  They do!  When I first wrote about them, they only had a few tracks up on MySpace, but their short but very enjoyable debut album "Uno" is now available, boasting swooningly romantic, trumpet-and-strings takes on Guns 'n' Roses, Bon Jovi, Led Zeppelin, Iron Maiden, and this Ozzie standard:

I just checked el linko and it worked for me, amigo. Su computer had too mas tequila..?

Need to get rid of the "#" symbol in the link before their name at soundcloud.

This is some hilarious stuff, but very well executed. These guys are great singers, great harmonies. Hearing Tony Iommi's solo played on acoustic guitar was great!

It's funny, because I've always thought a lot of Steven Wilson's harmonies were very Simon & Garfunkel-influenced.

These guys can consider me a fan.

Thanks Mr X, I've removed the '#'. hope that helps.
Unfortunately, they need more fans than you and I, they're really losing now to the routine-sounding Lost Wheels. Probably stuffing the ballot box. Where's Jimmy Carter when you need him?

Love the Hyemem & Metalfunkel - are the tracks properly available anywhere?

I have played Soundcloud rips before now...and will again, but I'd rather not!