I propose that we officially make March 4th 'Alternative Marching Band Day.' March 4th = March Forth. Geddit? And if any traditional American musical style needed alternative-ising, it's the marching band. Long relegated to playing century-old standards at political events and school football games, the genre started to loosen up a bit in the '70s when university bands played the occasional irreverent pop/rock covers amidst the usual Sousa stuff. 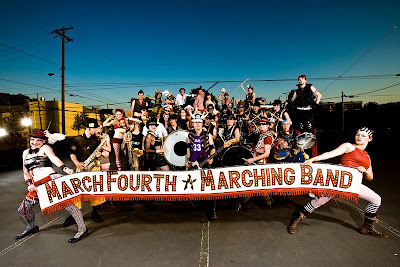 In the '80's, a bunch of downtown New York arty-smarties called the Les Miserable Brass Band made a definitive break from both the mainstream and the far more fun (but still traditional) New Orleans styles, interjecting international, modern jazz and experimental influences, and songs like Jimi Hendrix' "Manic Depression." Meanwhile, on the opposite coast, and with the opposite intentions, a gang of drunken Northern Californians called the Ophir Prison Marching Kazoo Band and Temperance Society, LMTD came on like Spike Jones saying "fuck art, let's (polka) dance" with their colorful costumes, stage names, and between-song comedy routines.

In recent years a veritable alt-march explosion has taken place, with numerous bands popping up across the country comprised of former school "band geeks" who still wish to perform, rock and rollers, jazz musicians, non-musicians, and sometimes street performers dancing, walking on stilts, breathing fire, etc, accompanying the blaring brass and thundering drums. No longer relegated to marching across a field at sporting events half-time, they roam city streets, making unscheduled guerilla performances in parks or on subways. They play rock clubs, and show up at political rallies. Some wear a kind of uniform, e.g. red pants & white shirts of any style, and some wear traditional band uniforms, but mis-matched, of any color. Non-traditional instruments (accordions, anyone?) are sometimes thrown into the mix.

I first wrote about this phenomenon after encountering L.A.'s awsome Killsonic crew, and got a number of comments from you fine folks heppin' me to other amazingly talented bands out there (thanks, gang!). Here's a sampling of recent albums now for sale (so go buy 'em) by the new march underground displaying a wide range of styles and sounds.
Avant-March - A Music For Maniacs Compilation

01 Ophir Prison Marching Kazoo Band and Temperance Society, LMTD (Folsom, CA) - Neutron Dance [great cover of a Pointer Sisters song that I'd never really given much thought to before]
02 What Cheer? Brigade (Providence, RI) - Malaguena [Cuban song, with a surf beat - GNARLY]
03 Revolutionary Snake Ensemble (Boston) - Soul Power [hmm, how do they march with that funky poppin' electric bass? Led by a member of Birdsongs of the Mesozoic]
04 Rude Mechanical Orchestra (New York City) - Push It [Salt 'n Peppa never sounded betta]
05 MarchFourth Marching Band (Portland, OR) - Ah Ya Bibit [incredibly powerful ethnic-influenced track - but which country? - from the band that gave this post it's name/concept]
06 Killsonic (Los Angeles) - El Cu Cui [female vox en espanol]
07 Extra Action Marching Band (San Francisco) - Back That Ass Up
08 Infernal Noise Brigade (Seattle) - Gas-No Gas [we posted an entire album by this now defunct but influential outfit HERE]
09 Mucca Pazza (Chicago) - Romanian Dance No1 [Balkan influences are not uncommon with many of these bands]
10 David Byrne - In The Future [the former Talking Head made his 1985 album "The Knee Plays" with the Les Miserable Brass Band]
11 Asphalt Orchestra (New York City) - Zomby Woof [a Zappa cover, courtesy of a Bang On A Can spinoff group]

March Fourth are great!
I've been to many an event that has featured their raucous stompin' music (most notably, the protest marches leading up to the Iraq invasion).
I especially dug their electric bassist, hauling amplifier in a little red wagon.

There's a jaw-dropping idea out from 1966, BAND OF THE IRISH GUARDS, MARCHING WITH THE BEATLES, which would seem to be one of the grandparents of this idea.

"hauling amplifier in a little red wagon"? Hmm, maybe that's how the Revolutionary Snake Ensemble does it.

Don't know that Irish Guards one, but that does remind me of a '70s kiddie album by Hap Palmer called 'Mod Marches' with stuff like the Beatles "Let It Be."

Hey, it's still in print!
http://www.amazon.com/Mod-Marches-Hap-Palmer/dp/B0002GFLGU

Blaas of Glory is a good one from Europe. There are probably others. They have a web site and are on YouTube

There are some pretty awesome/weird marching bands in Denver. Boba Fett and the Americans is an awesome band that shows up unexpectedly does funny covers. I saw them crash one of those 'open nights' at an art museum. Priceless. There's a hilarious video of them busting in on a Fox News broadcast on Youtube. There's also a band called itchy-O that pushes the marching band paradigm further than maybe any other example I've seen. Go dig their music (myspace/itchyo) and then try to imagine it being performed by a marching band. I saw them at a house party and they file in the front door dressed like some kind of space-age ninja mariachi band and then wander all over the house while playing. It's LOUD and bizarre, definitely one of the more Maniacal bands around these parts!

Thanks for the tips, guys. I knew there was probably more out there.

Blaas of Glory looks brilliant. Gotta find their album. Europe's brass band tradition isn't exactly like the American marching band, is it? Do they march?

Checking out that Denver sounds now. That itchy-O stuff's crazy. Really sounds nothing like marching band music. Cool videos for Boba Fett and the Americans but unfortunately they don't seem to have any mp3s or albums available...

you didn't mention Hungry March from NYC!
Hungry March and Extra Action are the originators. March Fourth is the 3rd generation, the mainstream commercial version, they auditioned for "America's Got Talent." They took something different and made it normal, you can't call indie marching bands alternative now that there's a burningman/cirque de solieil-esque one in every town. Now that the markets cluttered the actual weirdo originals can't afford to tour(or so i hear, maybe they are just old and lazy now but they haven't made it to my town in 8 years) i miss the old days :"(

ditto the Hungry March Band. going since 1997, 4 self-produced records (maybe more, including live stuff) ,6 European tours, appearances in movies, etc.... all before 2006, when most other bands were still getting their teeth cut (Extra Action, and a few of the much older guard of activist marching bands, Seed and Feed Abominable, Bread and Puppet). They're still around, but don't play or tour as much anymore.

Thank you for re-posting. Some day I will record the various Rocky & Bullwinkle music I arranged for marching band back in high school and I will send it to you exclusively.