"Bernie Green plays More Than You Can Stand In Hi Fi" is back on line. 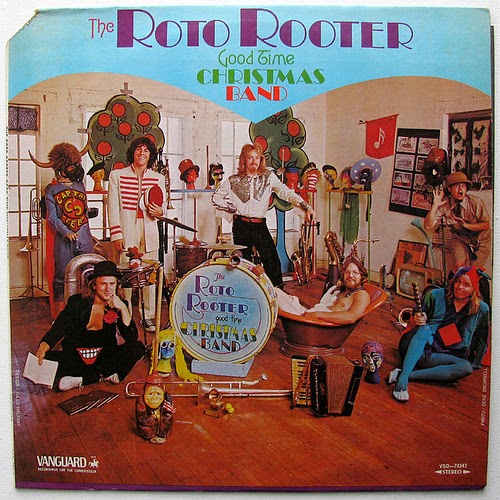 This cheerfully eccentric band of refugees from the UCLA jazz program made just this one  1974 album, perhaps never fully realizing their potential.  Their role models, Spike Jones and His City Slickers, and the Bonzo Dog Band, were only just getting warmed up on their first releases. Tho they suffer a bit from the "we're so wacky!!" affliction, but they get a pass, as there are far too few musical anarchists like this who have the chops to play jazz and classical but make the noble decision to throw away all artistic 'credibility' in the name of eclecticism and absurdist humor. And the Roto Rooters were def on the right track, showing a healthy irreverence towards classic rock ("Purple Haze") and classic classics ("The Sabre Dance"), covering campy oldies like Shirley Temple's "On The Good Ship Lollipop" and singing cowboy Roy Roger's signature sign-off song "Happy Trails." (Supposedly Van Halen got the idea to end their shows with "Happy Trails" from these guys.) For some reason folkie label Vanguard Records put this one out. Granted, they also released Perrey & Kingsley's Space Age Moog-sterpieces, but still, a strange choice, and perhaps no surprise that this album sold about 12 copies before dropping off the planet.  (My recently-purchased copy was still in the shrink-wrap!)

If we extend the definition of the pre-punk L.A. 'Freak Scene' beyond Zappa's immediate circle of outsiders and oddballs (Wild Man Fischer, Cap. Beefheart, The GTO's, etc). we'll find plenty of like-minded loonies that followed in their wake, inc. The Los Angeles Free Music Society, the art/music axis of Mike Kelley/Jim Shaw/Destroy All Monsters, radio host/music archivist Dr. Demento, The Mystic Knights of the Oingo Boingo, Zoogz Rift, the Rhino Records label, and these chaps. What the 'freaks' had in common was a rejection of the SanFran 'hippie' attitude, a love of old-timey musics, jazz /improvisation and avant-classical, and a whacked-out sense of humor. They may have liked some psych rock, but had no interest in being 'mellow', they were in-your-face cynical smart-asses. Raised on 'Mad' magazine, they were among the first to realize that the 20th century had already produced a huge slew of ignored pop-cultural waste - monster movies, thrift-store records, bad TV - just waiting to be creatively recycled. 'Avant-tarde,' decades before that phrase was coined. Jazz music had just died after the glorious supernova of electric Miles, H. Hancock, etc, and had quickly settled into it's current bland 'smooth-jazz' zombie-fied afterlife, rock had not yet experienced the punk Big Bang that would create a viable DIY culture, and the classical avant-garde was snugly tucked into it's academic ivory tower. There wasn't much 'alternative' culture at the time - you had to swim in the mainstream, or quickly sink into obscurity. And much of the above-mentioned stuff was indeed pretty obscure. Even the 'famous' names like Captain Beefheart never rose above the club/mid-size venue level, and certainly never came near the Top 40.

But there was one glimmer of independence - the afore-mentioned Dr. Demento show. A Sunday night radio show from LA specializing in comedy/novelty records that became a fixture on virtually every American FM rock station, "The Dr. Demento Show" was geared towards youngsters, and admittedly featured plenty of sophomoric yuks. But it was also a free-form free-wheeling forum for strange and forgotten sounds of any era or genre, from old 78s to unsolicited demos. Barry Hansen (Dr. D.) would actually listen to anything that hit his mailbox. The RRGCB sent in one such tape and became the first of his discoveries, quickly becoming the house band for the show. Their version of a Dr. D. hit, the great Big Band oddity "Pico and Sepulveda" (included on this album) became the program's theme song. They also provided incidental music for the show, such as the weekly top ten/Funny Five jingles. For lots of videos (inc. an otherwise unwaxed cover of "Jollity Farm") check out their

And they don't play any Christmas songs.

I have this record and love it.
Back when I lived in LA, I used to get used records at DB Coopers. The guy told me he was part of the Roto Rooter Good Time band. I didn't know at the time that they were the ones who did all the jingles on The Doctor Demento Show.
Over at their blog, they used to sell a cd with those jingles on it. Wish I had that one. You can see it here
http://rrgtcb.blogspot.com/2009/06/exclusive-bonus-cd-now-on-ebay.html

Thanks for the tip Doug - I just went over to ebay (and then to Amazon) and there's no copies of those CDs available. Would love to hear 'em...

I haven't heard the Van Halen Happy Trails. But there is, of course, the Quicksilver Messenger Service version on the album of the same name. A beautiful cover picture too.

Then the search is on!
I'll let you know if I ever find it.

Thank you so very much for this! It was indeed wonderful!

Is there any chance of you re-uploading this album? The Zippyshare link has expired.