The Story of the First Voice Synthesizer, The SONOVOX

Long before Peter Frampton's talk-box, the Vocoder, or Autotune, there was the Sonovox, demonstrated here in what must surely be the strangest "pop" music of the 1940s:


Anyone have a spare Sonovox lying around? It's almost David Dole's 100th birthday, and he'd really like one. Granted, the considerable historical importance of this gizmo almost assures that it won't be found in too many attics or garages - museums, more like.  But he really deserves one. After all, he was one of it's first users.

If any invention was truly out of time, the Sonovox is it. It's ability to create strange electronic sounds and music would have been welcomed in the post-Moog '70s and '80s when bands like Kraftwerk and Zapp were artificially processing their vocals. But, incredibly, the Sonovox was invented at the height of the Big Band era. For the most part, people didn't really know what to do with it. But our special guest poster today is here to tell us about the one industry that did utilize the Sonovox: advertising.

I am quite amazed and delighted that Mr. David W. Dole is able to give us this first-hand account of the history of the Sonovox. I don't know if it's story has ever been told in such detail in public before. Here's the man himself:

Sonovox enthusiasts: It must have been around 1942... I was 28 years old - working in the "broadcast department" (of course then that meant "radio" only) at Henri, Hurst & McDonald - an ad agency - 520 No. Michigan- Chicago. About 1940, in California, Gilbert Wright was dressing for the day and was using his new electric razor with which to shave. Some 15 feet away - in the bedroom, his wife called to him with a question. He answered while stroking the electric razor over his throat. Mrs. Wright called to him: "What did you say, honey? - it sounded like your razor was talking to me!" Voila! Birth of an idea!

Gil thought it thru - and about two years later he and wife were visiting her brother (I think that was the relationship) in Chicago - and putting out the word they had something new and unique called Sonovox for which Gil had obtained a patent. Gil's brother-in-law was a partner in a radio rep firm on Michigan Avenue. The word went out, through the brother-in-law's sales reps to the timebuyers in Chicago that Sonovox was issuing an invitation to visit the radio rep firm and learn about Sonovox. I was interested and visited - and learned how to become a Sonovox articulater. I spent perhaps 6 or 7 lunch periods - slightly extended - using Gil's equipment plus a 10" Victor Red Seal phonograph record of Andre Kostelanetz orchestra of some 40-60 musicians playing "Mary Had A Little Lamb".

I was particularly interested in the capabilities of Sonovox and how it might effect my then current job. You see I had been a radio sound effect artist in Minneapolis and had moved to Chicago and joined the agency for John Morrell and Company - meat packers - in Ottumwa, Iowa for their product, then the largest selling dog food in America. On the program, encouraged by the announcer's "Come on, boy. That' it. Sit up! Speak, speak:" And with that I would whine, growl, and end with "Woof, woof, Red Heart" The announcer would repeat it - "That's it - Red Heart"... in three flavors: Beef, Fish and Cheese! Americs's largest selling dog food!" I was curious as to whether Sonovox might either put me out of business as a sound man - or would be a tool to use in place of my live performances ! Turned out neither!

As I was deciding on this, Mrs. Wright came to me, complimented me on getting the use of Sonovox down pat and asked if I would consider making a trip to New York on their behalf as an articulator. It seems that they had sold the idea of using Sonovox to Bromo Seltzer's agency - articulating a steam engine chugging along repeating "Bromo-Selt-zer - Bromo- Selt-zer", but that Mrs. Wright had been the articulator and the client felt that the product would be better represented if the articulator was a male. (The Sonovox technique is sexless but the client was not persuaded.) I replied "Yes, be glad to". But it proved un-necessary - the client was convinced Sonovox was sexless.

I'm still in the market to acquire Sonovox equipment with which to entertain my grandchidren! Know where I can acquire a unit? David W. Dole dwdole@me.com 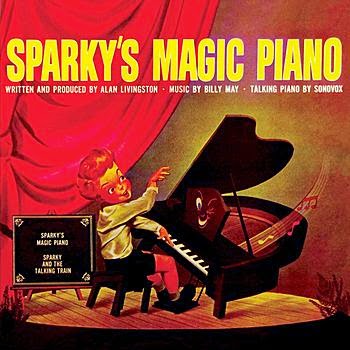 There are a number of wonderful old "sono" radio commercials you can listen to here:
PAMS advertising

The other early adopters of the Sonovox were children's record producers. I've uploaded one such goodie from 1947, plus a bonus track: an mp3 of the audio from the above Kay Kyser video, from the 1940 film "You'll Find Out".

Much thanks (and happy birthdaty!) to David Dole.

Oh, and he would also like to pass on one of his other innovations:

Much respect and 'chapeau' to Mr Dole.

I's love to form a band with it and call it "Darth Voder" ;P

That Voder is fascinating. It doesn't appear to process actual human voices like the Sonovox (and talk-box, Vocoder, etc) but to create completely artificial vocals, like a text-to-speech program. 1939? I believe that the Sonovox was invented a bit before this. Or at least right around that time. Would love to hear more of it.

The Sonovox has been used by Jimmy MacDonald, the first director of the sound department at Disney Studio for the film "Dumbo" in 1940. With this machine, he could give to the animated character, Casey Junior, a marvelous living circus train who can move and talk like a human. With his use of the Sonovox he became a true pioneer in sound design for films.