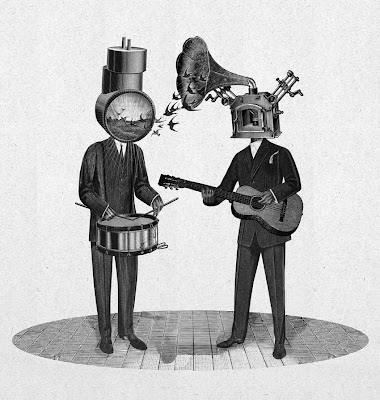 At long last! Count Otto Black's continued spelunking into the dark, forgotten caverns of music history has resulted in another overdue (my fault, not his) collection of funny, strange, suggestive, and/or offensive audio oddities from the first half of recorded history. The Count speaketh:

"Firstly, some bizarre examples of political incorrectness from days gone by (these are nowhere near the worst). "We're Gonna Have To Slap The Dirty Little Jap" is symptomatic of a more innocent age, when we apparently thought that wars could be won by giving the enemy a jolly good spanking. There were plenty of post-WWII jingoistic propaganda records, but after Hitler, it was generally agreed that the ideal way to cope with evil dictators involves death rather than spanking.

Moving swiftly on, I give you Helen Kane, a young lady who in 1932 attempted legal action on the grounds that, since for several years prior to the cartoon she'd been singing like Betty Boop, saying "Boop-boop-be-doop!" on a regular basis, and even looked like Betty Boop, obviously she was Betty Boop, so she deserved a slice of the vast profits that mega-successful character was generating. She lost when the prosecution demonstrated that she had herself pinched her entire act from an even earlier very obscure black performer called Baby Esther, and as for alleged resemblance, Betty could equally well be said to look like the much more famous Clara Bow. This didn't stop Helen Kane from spending the rest of her career implying as heavily as she could without using the actual name that she was Betty Boop, and cutting a great many records on that basis. I include one to demonstrate what I mean.

However, she had nothing to do with the cartoon - almost all of the classic 1930s films were voiced by Mae Questal, who lived to be over 90, and was still doing the Betty Boop voice whenever it was needed right up until the end - amazingly, that's her in Who Framed Roger Rabbit. To provide a useful "Battle of the Boops" comparison, I've attached an incredibly strange record by her, which seems to be about a rag-doll who dies of cancer. Who thought this was a good idea? And if it somehow is, why aren't there any Skooby Doo AIDs records?

Continuing the theme of cartoon characters singing about death, there is, however, an Elmer Fudd road safety record! Though once again, the vocalist "Waymond Wadcwiff" is not the real voice from the cartoons (according to Wikipedia, the only famous Raymond Radcliff was a basketball player, but I think this must be a different one), so the name "Elmer Fudd" is not used - it's all rather confusing, really. Presumably that's why "wabbits" are never mentioned, and a goose is run over instead.

You may be familiar with "I've Gone And Lost My Little Yo-Yo", though this is a lesser-known version by Leslie Holmes (50% of the Two Leslies). At one point every version was banned by the BBC for being far too filthy! Then Ruth Wallis came along a few years later and obsessively carried on with the rude yo-yo theme in a way that makes Chuck Berry's notorious "ding-a-ling" sound quite innocent. So here's a trilogy of increasingly filthy yo-yo songs - how specific can a genre get?


Continuing with the mild innuendoes that seemed terribly daring at the time, the Pearl Boys discuss female absentmindedness in large hotels, and the Milt Herth Trio protests about how carelessly policemen handle fruit. But the reflections of the Deep River Boys concerning the culinary shortcomings of underage poultry are by today's standards downright creepy... I think I'd better take the curse off it with another merry and totally innocent Hadacol song completely different from the previous one - clearly the stuff was popular!
Just for jolly, I've added an utterly incomprehensible song about the Stellenbosch Boys, and how they coped with Germany's terrible baboon problem (or something), and of course "Take Out Your False Teeth, Daddy" - surely a neglected classic?

I also include both sides of a record which proves that Gefilte Joe and the Fish, one of the numerous one-note "comedy" acts of very dubious merit promulgated by Rhino Records, did not invent the concept of parodying popular songs in an excessively Jewish manner for comic effect. Mickey Katz & His Kosher-Jammers were doing it decades previously! They weren’t Spike Jones and his City Slickers, though Mickey Katz did play with Spike’s band for a year. He was quite prolific, and cut numerous tracks that were controversial even among other Jews, some of whom felt that in the wake of WWII, this kind of cartoonishly exaggerated Jewishness was doing them no favors. Anyway, I attach what seems to have been his greatest hit, “Yiddish Square Dance”. It’s a very lively number which may well have hilarious lyrics, though if you don’t speak Yiddish it’s hard to tell.

Wendell Hall retains his dignity and wants to know “Who Said I Was a Bum?” Meanwhile the Pearl Five’s “Golfin’ Papa” somehow manages to make golf sound naughty - and now I think about it, “niblick” does sound as though it ought to be smutty. And we can't not have another one from at least half of the Two Leslies (Leslie Holmes is the tall one with the glasses).

Moving swiftly on to Frank Marvin’s “Yodellin’ Rambling Cowboy”. The odd thing about yodeling records is that, although it’s absolutely impossible to sing about anything the slightest bit serious if you’re going to yodel in the middle, some people insisted on trying. This is the surprisingly merry tale of a misogynist psychopath who married a nymphomaniac and ended up committing murder and going to prison for life. Yodel-ay-he-hoo! And now it's time for the scratchy old Count to go back in his box..."

I once again offer my thanks to Count Otto Black (and so should you!)

I love these!
I was so sure that Silly Goose was done by the original Elmer Fudd, that I did a search on Arthur Q Bryan (the original Elmer Fudd) and then translated the artist listed Waymond Wadcliff into Raymond Radcliff and found that it was his voice.
the GAC (Golden Age of Cartoons) blog said that he did the Raymond Radcliffe character on old time radio's "The Al Pearce Show"

So there you have it!

The Waymond Wadcliff song also sent me researching - I was surprised that Elmer Fudd wasn't voiced by Mel Blanc. I just assumed that he did all those voices.

Well, that's interesting! I suppose there must have been some complicated copyright issue that prevented the trademarked name "Elmer Fudd" being used on the record. Although I post these things, it's all so far back in the mists of time that sometimes the details get a muddled. There certainly was a Bootleg Betty Boop, so I thought it entirely plausible that there was a Faux Fudd too. I stand corrected.

And, as a great man once said, there's more where that came from!

Thanks to youse both for more. This batch is also great. Very funny all.
I also enjoyed the covers that displayed on VLC player.
Many were the actual covers, but a few were just the closest their search engine could find. Lol.

I, at any rate, was amused that Woody Allen's ZELIG features a bit of a novelty song, "Chameleon Days," and shows a 78 label crediting it to Helen Kane. I stayed through the credits, and Kane's voice was provided by (who else?) Mae Questel.

And speaking of that angel, an intriguing bit of an interview from the 70s or perhaps 80s, had the lifelong Olive Oyl telling who did which voices in the Popeye cartoons. At one point, Jack Mercer was called away (Army, I'm thinking), and they tried one or two other people on the voice. Questel said that she ended up doing the voice herself for a while, perhaps as long as a year. "And she still does it, amazingly well!" said the interviewer. Of course, it was a printed interview. I'd love to hear her do the Popeye voice!