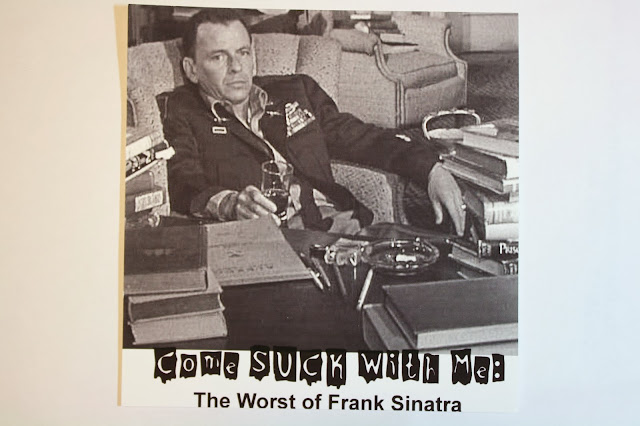 I love Frank Sinatra's music, got tons of his records. But anyone with a career spanning six decades has got to drop a few turds along the way, and The Chairman of The Board is no exception. And that is what we are presenting here today: 15 examples of the worst, from the greatest.

There's the good-bad Frank, which is fun, e.g. finger-snappin' his way thru unlikely/inappropriate songs like Stevie Wonder's "You Are The Sunshine of My Life" (a staple of my Vegas road trips) or his hep-cat spin on Simon and Garfunkel; his groovy mod duets with daughter Nancy (sample lyric: "I'm lookin' out love-colored windows"); or when his take on "Mack The Knife" becomes a self-conscious history lesson on that oft-recorded classic. 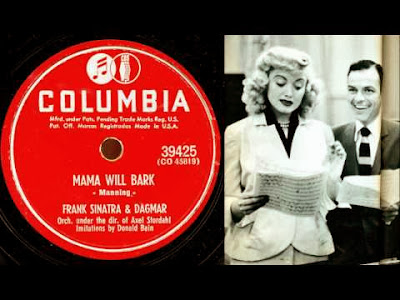 And then there's bad-bad Frank. "Mama Will Bark," a duet with the now-forgotten Dagmar, a performer more known for her curvaceous figure than her singing ability, has been called the worst thing Frank recorded, and I would not argue. Literally, a dog of a record. Nothing else here is quite as cringe-worthy, but the unreleased (for good reason) disco version of "All or Nothing At All," or the appalling duet with that ghastly creature Bono come pretty damn close.  Yes, sometimes you can judge a book by it's cover: "Everybody's Twistin'" sounds exactly like you think it would. And has there ever been a good version of "Winchester Cathedral"?

This collection eases you in: at first, there doesn't appear to be anything particularly wrong with this version of "Some Enchanted Evening." The "South Pacific" standard should be a slam-dunk, right?  But it gradually becomes clear that Frank has no feel for the song whatsoever, as he's been hobbled by a terrible arrangement, and it just goes completely off the rails. Surprising that this one got out of the can. (Although I guess you could say that for most of these tracks.)

This collection come to us thru our regular contributor windy via his pal, another mad-dog record collector named MadJon, who conceived, compiled, and created the cover artwork (above) for this festering concoction. Thank (or blame) them! Jon's notes for each song below. 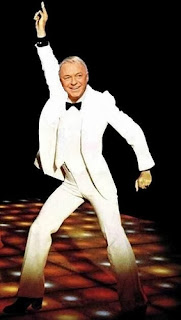 Frank Sinatra - "Come Suck With Me"

01some enchanted evening
02Everybodys' twistin
03 i whistle a happy tune
04mama will bark
05all or nothing at all (disco)
06winchester cathedral
07mrs robinson
08 feelin kinda sunday (w/nancy)
09 life's a trippy thing (w/nancy)
10 you are the sunshine of my life
11bad bad leroy brown
12ive got you under my skin (w/Bono)
13mack the knife (w/Quincy Jones; vibes: Lionel Hampton)
14the 12 days of christmas (w/Nancy, Frank Jr, and the rarely-heard Tina Sinatra)
15 my way

Some Enchanted Evening: The Richard Rodgers estate was very strict about licensing its songs for recording. Altho' Sinatra had recorded this tune in the past, on Columbia in 1949, they gave him a difficult time about it two decades later. Personal? Who knows, but when Sinatra finally got the rights, he made it personal and recorded this ridiculous, horrible version as revenge.
Everybody's Twistin': Sinatra craved hits as much as anyone and would lower his famous standards when required. Here, he takes an old song by Fats Waller called "Everybody's Truckin'." changes the title and imagines he has a twist hit. He didn't. In America it only went to #75.
Mama Will Bark: It's too easy to say that Mitch Miller forced Sinatra to record this. Imagine ANYONE telling Frank what to do! Sinatra puts his all into this record, and seems to be enjoying himself. The flip was the tragically beautiful "I'm A Fool To Want You" which he co-wrote. Both sides did well on the charts. It remains awful only because it's incomprehensible that he would have gone along with it.
All Or Nothing At All: Before the huge success of his Trilogy album, Sinatra was lost in the 70's, with the label he founded only releasing several singles between 1974 and 1980. Clearly desperate, Sinatra re-recorded two old hits of his as disco records in 1977, this and "Night And Day," but "All Or Nothing At All" was so awful it remained unreleased until the Complete Reprise box set in 1995.
Winchester Cathedral: Enjoying a surprise return to the Top 10 charts in the mid-60's, Sinatra decided that every other album would be "for the kids." Like the kids were waiting for this.
Mrs. Robinson: Reportedly, Paul Simon hated what Frank did with his song, as should we all.
Feelin' Kinda Sunday and Life's A Trippy Thing: Juvenile hippy crap. Worst, who could even imagine the word "trippy" appearing in a Sinatra title?
You Are the Sunshine Of My Life and Bad, Bad Leroy Brown: Both from the album Some Nice Things I've Missed (1974), it's another one "for the kids!" The latter song being a #1 hit in 1972, Reprise thought the kids would like Frank's version as a single two years later. It (#83), like the album (#48), did poorly, and so began Frank's lost decade.
I've Got You Under My Skin (duet with Bono): Inexplicably, the public made Sinatra's first Duets album a smash hit, even if it never sounded like Frank was ever in the same studio with his guests, as is most evident here. Frank sounds flat, while Bono's vocal is produced with his trademark ethereal sound. When their vocals are mixed together, their phrasing doesn't match.
Mack the Knife: Sinatra's last album, L.A. Is My Lady, produced by Quincy Jones, is almost entirely awful throughout. Here, Sinatra can't resist changing the lyrics as he salutes the members of the orchestra.
The Twelve Days of Christmas: Featuring his three children (only one of whom ever achieved success on her own) the repetition of the all-too-cute, terribly unfunny jokes quickly becomes horribly obnoxious. It is the one track on this compilation that I cannot bear listening to.
My Way: It would be easier to take if recorded by a better man with a lesser voice, but here Sinatra celebrates a life of bullying abuse which the public is well aware of. Additionally, it is ironic that at his own label, Sinatra cared less about the engineering of his records; on the line "For what is a man?" there is an over-saturation of the vocal on the tape, creating horrible distortion that technology can never fix.
I threw this collection together quickly one day, being too lazy to look for more, but I know more stinkers are out there, and perhaps in the future there will be a Volume Two.

UGGHHHHH THIS IS CLASSIC THANK YOU TIMES ONE MILLION!!!!!

What, exactly, is the point of sharing a track that you cannot bear to listen to?

I got nothing particular against chairman blue eyes, but I really can't see what here is necessarily more schmaltzy / soulless / painfully unlistenable compared to any number of his "good" tracks.

Hi, I’m González from the western/surf band Los Tiros. We just released our new video for the song Casino. I’m sending links to our new video, our record Tu Pesadilla Regresó, Bienvenido Al Infierno released by Bajo Presión Records. Thanks for your support.

I'm tempted to say that Photocar knows nothing about music, but I think he pretty much just said it himself.

I really enjoy Franks' music, so I had a big interest in this collection.
I sat down and started playing it for the me and the wife. She quickly demanded I change the music. She couldn't take it. Lol.
Me, I think it's highly amusing.
Big gracias.

It's back. Dang, why are these posts disappearing after just a month or so? Frank's goons must be leaning on zippyshare...

Really enjoyed this compilation! Love the site! thanks for this and hoping for Volume 2...most of these were so bad they were good!

Given this a lot of spins the last month or so....and I would argue some of 'em ain't too bad. I think that version of "Leroy Brown" swings like a bastard! And out of the hundreds of versions of "My Way" out there, is this one really so bad?

It's all relative anon, The Chairman's worst is still better than most people's best.


Is this a comedy album??