One of the most unlikely stars of the late '70s-to-early '90s punk/college rock days wasn't a musician at all, but a taciturn, elderly writer clad not in flannel shirts and Doc Martens, but a three-piece suit, hat, and cane. How a novelist with no musical background who began his career in the 1940s became so popular an alternative music figure that Kurt Cobaine backed him up on one of Cobain's last recordings is one of the odder, more fascinating footnotes in this otherwise heavily examined musical era. 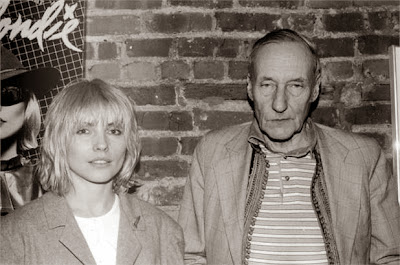 William S. Burroughs is, of course, one of the most celebrated figures in 20th century literature due to his key participation in the "Beat" movement that essentially dragged American letters into the modern era, rejecting classical European/Shakespearean influences in an attempt to create a literature as unique to the U.S. as jazz is to American music. And, indeed, the cliche of the beatnik reciting stream-of-consciousness poetry over cool jazz is the first thing that pops to mind when considering the confluence of the Beats with music.

But Burroughs was never a beatnik.  He was a junkie and heroin dealer who accidentally shot and killed his wife, traveled thru Latin America and Morocco, helped popularize North African trance ritual music, dismantled literature via his "cut-up" method of chopping up and rearranging pages of writings, was put on trial for obscenity, saw his son go to prison, saw his son die, was gay in the pre-Stonewall days, and co-created a "dream machine" said to create somewhat hallucinatory experiences when activated.

In other words, he'd been thru some shit. By the late '70s, he was back in the States and started giving public readings in his now impossibly craggy, deep, world-weary voice.  This was to be his main source of income for the last years of his life. The downtown New York scene was receptive to both his writings and his voice, filled as it was with not only the weight and wisdom of a life you never led, but with an idiosyncratic rhythmic delivery. He left New York for Kansas in 1981, well on his way to becoming an icon of cool.

After a while, it wasn't enough to just listen to Burroughs read his own works, with increasingly elaborate musical backings, but to hire him to perform on other people's recordings. And that is what we have here: not Burroughs' own releases, but his various miscellaneous appearances on other bands' songs. Having Burroughs perform your music gave you instant hip cred, and gave a Bill a paycheck. As this article puts it, he was a rock star to rock stars. William S. Burroughs died in 1997, at age 83.

it's "Ich Bin Von Kopf Bis Fuß Auf Liebe Eingestellt" with an "ß", this weird German letter pronounced like a sharp "s". Have a look: https://en.wikipedia.org/wiki/%C3%9F

No one careß, grammar police.

For those of you wondering: who is this Burroughs guy, and why did all these hipsters want to record with him? Check out this archive of him reading from his own works:
http://ubu.com/sound/burroughs.html
I esp. recommend "Junky".

Thanks BP Orter; and Diz-E: yes, those readings are some of the recordings that college radio would play in between The Pixies and The Butthole Surfers or whoever - the things that made bands want to hire him to appear on their records. I don't blame them - that voice makes everything sound pretty cool, even (almost) Jim Morrison's poetry.

The listed are all 'official' collaborations. The 'one' I remember most is his spoken-word piece "Dinosaurs" (on a Giorno Poetry Systems anthology) being played over, say, an instrumental hip-hop track, with solo interjections by Kaiser & Frith and the cast of "Star Wars", or in pseudo-dialog with Ronald Reagan, over Wagner or Phill Niblock.

Such was college radio.

Methinks Burroughs resurgence of popularity followed that of Naked Lunch, as much as vice versa. It was a hip book in the seventies.

Oh, and one of the most blatant Burroughs references? Steely Dan, three dildoes from Naked Lunch, not two dildoes from Annandale.

Actually, it's "Ich bin von Kopf bis Fuß auf Liebe eingestellt". Verbs and prepositions aren't capitalized in titles in German, but (as always) nouns (e.g., Fuß and Kopf) are. The "ß" is a double s (so equal to "ss"). Thanks for the many interesting posts here. ... Would it be possible to get a new link for this W.S. Burroughs compilation? - the old one doesn't seem to work any longer. Thanks, again.

Try the ubuweb link,they usually keep their stuff on line.