Worst Christmas Album Of The Year... 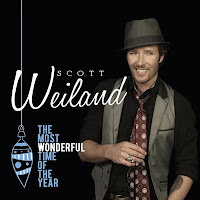 ...is by the Stone Temple Pilots guy Scott Weiland. Listen to it streaming here (if you dare).

The first song had me thinking that he just might pull it off, but then...it was hard to listen to "I'll Be Home For Christmas," which you can listen to/download

without spitting out my eggnog in laughter. The absurd crooner vibrato and wavering pitch of the former rocker/junkie/jailbird is backed by "sophisticated" orchestrations, pseudo-calypso, cheezy Casio drum-machine lounge, and even the whitest kind of Jimmy Buffet-reggae. Won't knock out Dylan's xmas atrocity as 'worst holiday album ever by a rocker,' but Bob does now have some serious competition. Merry Kissmyass!
Posted by Mr Fab at Monday, December 19, 2011

WOW that was painful!

I thought the worst was CHRISTMAS WITH THE KING FAMILY. CD reissue is a needle-drop "remaster" with mono bonus tracks from the TV video recordings from the various specials.

Thank you for giving me another target to look for. --Windbag

I can just picture Weiland "relaxing" face down on a chaise lounge as he recorded this!

Thanks for the laff!

he just really seems like he's in pain. It's hard to watch.

Jeff: I checked out "Perry Como: Still Alive" on the YouTubes - classic. not quite as funny as Weiland, tho.

"force pour a bottle of bourbon down Jerry Vale with a nasty cold" - THERE'S an image seared into my brain; why would such a thing happen?! Jerry Vale kidnapped off a Palm Springs golf course by terrorists!?

- That Billy Idol video: what a horrible, horrible idea; maybe Iggy could pull off something like that? he can croon and is self-aware enough to realize that the whole thing would be slightly ridiculous, something Weiland and Idol seem utterly oblivious to.

The Missus got to meet Billy Idol years ago when she took the kids to one of those big shoe company sponsored retail-friendly punk rock festivals and said he was charming as hell and really nice to everyone, chatting and signing stuff for everyone and put one one energetic show.

u can't really say it's the WORST without this version of the
little durmmer boy
http://www.soundlift.com/band/music.php?song_id=82930
see what i mean