Like I said: "During the upheaval of the late '70s/early '80s punk days, there was a real changing-of-the-guard feeling that led many groups of the time to cover classic oldies from the sacred rock 'n' roll canon in an irreverent (if not downright disrespectful) fashion." Part 1 and Part 2 of this series have been two of my most-downloaded collections, so here's a third batch - with suggestions from some of you - of wild 'n' wooly '70s/'80s devolved covers ranging from hardcore slammers to New Wave synth nerdiness to art-damaged tune destructions. You'll probably recognize a few famous things here, but there's plenty of obscure-but-great ripped-from-vinyl rarities as well. Weirdly enough, there are not one, but two electric violin-based tracks here: Walter Steding, and Nash The Slash. And, seriously, when was the last time you listened to the Plasmatics?

Put your hands in your pockets and commence pogo dancing...NOW! 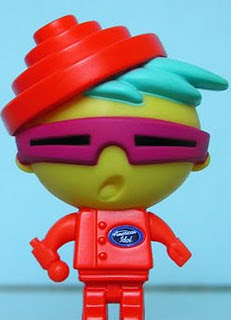 Why the American Idol karaoke doll with the Devo headpiece? Windbag

The doll was given out by McDonalds to represent the New Wave genre (does American Idle even feature any New Wave?).

Devo was not amused, and sued 'em.

I broke up when you explained the doll. American Karaoke is Clive Davis trying to recreate his success with Manilow and Air Supply now some 25 years later, at least on the recording end. I think the closest AM-I has gotten to new wave is Adam Lambert doing a mashup of Boy George & Culture Club as played by an Elvis impersonator (hmmm...inspiration...echoes of Dread Zeppelin?)

McDonald's got zinged back in the '70s for stealing H.R. Puffinstuff's closet for all the live action cartoon characters like Grimace and the Hamburgler, as I recall. Windy

Wendy O Williams cover of "Stand By Your Man" has long been my favorite cover song. She knew how to make any song bad-ass.

Looks like I've discovered your "New Wave Covers" series too late. Hope you're able to repost them at some point!

Hi, can you renew the link to New Wave Covers For Oldies Lovers - Part 3? I just discovered it after your new Covers post, thank you so much!

New Wave? Some songs are Punk Rock (Punk), isn't it?

Yes Berhard, but as I recall in ye olden times, the phrase "New Wave" was used to cover all the new music, at least so far as the media and music biz was concerned. I don't recall hearing it specifically mean the less angry/more pop stuff until later in the '80s.