The University of Utah has this insane idea to record all non-human areas of the American West. There are hundreds of wildlife/ambient recordings up so far. Read all about it.

Right now I'm in the Alaskan Arctic tundra (Brrrr!). At least, for 11 minutes. Some of the ambient soundscapes last for over an hour. It makes for addictive listening, and from both a scientific and aesthetic viewpoint, it's absolutely crucial.

The recordings can be detailed, but you gotta pump up the volume - the levels are pretty low.

All this Arctic stuff reminds me of Tanya Tagaq. She's an Inuit (Are they Eskim 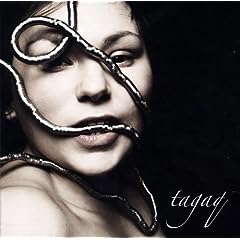 os? Or are they not called Eskimos anymore?) from far northern Canada who makes singing/grunting/beat-boxing a capella music that ranges from scary death-metal growls to orgasmic moans, sometimes coming off like Bjork choking on a whale sandwich, electronically looped into rhythmic dementia. It's supposedly based on traditional folkloric styles, but with artsy folks like Mike Patton and the Kronos Quartet guesting on her albums, I'd say she's sled-dogging off into fairly uncharted territory. In any case, it is some deeply weird stuff, even for this blog.

Her most recent album has the string quartet backing, but I prefer the stark (mostly) voice-only sound of her debut. And it goes well mixed with the Arctic ambience I posted above.
.
Posted by Mr Fab at Friday, September 04, 2009

Thank you for bringing Tanya Tagaq to my attention. Have you heard the Canada Inuit Games and Songs entry on UBUWEB?
http://ubu.com/ethno/soundings/inuit.html

Thanks jim, man that stuff is NUTS! Can def. tell where Tagaq is coming from, tho of course she is but one person aided by technology compared to the traditional 2-girl system.

loving this, although am I alone in thinking the 'kinell kinell' sounds made about 39 secs in sound like something off Sesame Street?

Although the meaning and entomology is heavily debated the term "Eskimo" is found to be pejorative and offensive to most of the tribes up there. But that's mostly only in Canada and Greenland, in Alaska and Siberia it's still commonly used. "Inuit" is a bit safer but not all "Eskimos" are Inuit, so it's kind of complicated. That song didn't sound all that unusual to me, but I've been hearing Inuit Throat singing since I was kid. Tagaq is an awesome artist though. I love your blog.
Cheers

Quick input on the Eskimo/Inuit thing: Eskimo is considered offensive in Canada, but is still generally acceptable in Alaska because it more universally covers Inuit and Yupik peoples. Tanya Tagaq is Inuk (the singular form of Inuit).