IN A TIPSY MOOG

Two retro-techno acts have new albums out. Well, the Thelonious Moog album is new, Tipsy's latest came out last year, but I just got it, so, hey, it's new to me. 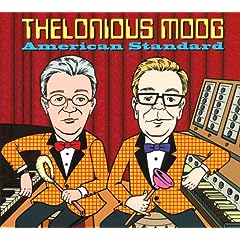 Thelonious Moog's debut was, as you might expect, jazz cats playing Mr. Monk on vintage synths. Their follow-up, "American Standard," ditches the music of their namesake for an unpredictable, irreverent romp ranging from heavy cats like Gershwin, Brubeck, & Zappa, to the EZ kitsch of those thrift-store inevitables "Alley Cat" and Al Hirt's "Java," all getting the same zany Space-Age treatment. Duke Ellington's exotica standard "Caravan" goes surf-rock (+ odd noises) and one of my fave kooky '70s glam classics, "Hocus Pocus" by Focus, gets tackled here twice. All quite silly, but played by pros, and plenty fun.
Raymond Scotts' "Powerhouse" gets the full-on wacky cartoon sound-effects treatment:
Thelonious Moog: "Powerhouse"
Tipsy made two albums in the '90s that were very well received by the Co 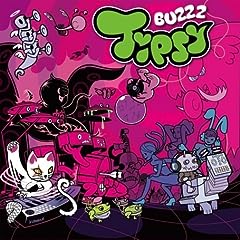 cktail Nation for their "liquor-delic" sound: sampling snippets of '50s records and drenching them in echo and disorienting production. After spending much of this decade in commercial music production, they have finally dropped their third album "Buzzz." It still has their trademark dreamy late-night weird feel to it, but I don't think that they're using much sampling this time out. Rather, they are making original music that sounds like it's been sampled, if that makes any sense. Except for some wispy female Japanese vox, it is, like the T.Moog album, all instrumental.
This tune sounds like reggae dub from a Sid & Marty Krofft show:
Tipsy: Chop Socky 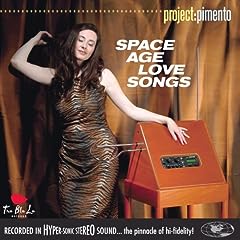 And San Francisco's theremin-driven lounge combo Project: Pimento released their thoroughly non-new second album "Space Age Love Songs" well over two years ago. I actually do not have a copy of it yet - all I can do is lamely link to a track off of it. But I mean well.

Now I see why I had not heard anything from Tipsy in such a long time. But I am glad they are back.