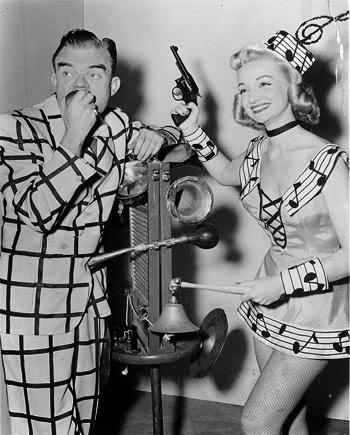 To make up for my lack of posts during my winter break, here is every single record Spike Jones and His City Slickers released in their first 7 years, 106 songs in all (split up into three sections). More radical than most academic avant-gardists, but a damn sight funnier,  bandleader/ drummer/ occasional vocalist / sound fx maker Jones and his numerous cronies weren't the first novelty orchestra (bands like the Korn Kobblers preceded them by a few years), but they did set the standard that musical anarchists have been striving for ever since.

As familiar as Jones is, it's still enlightening to listen to all these songs in chronological order, as one can hear the development of the band from a compact unit specializing in a kind of crazed Dixieland jazz, to an increasingly open-ended project, incorporating more and more musical styles, guest vocalists, and tracks that are more like sketches than songs. And tho I knew about their biggest hit single "Der Fuehrer's Face" (and the infamous "You're A Sap, Mister Jap"), I didn't realize how many WWII songs they did record. In "Leave the Dishes in the Sink, Ma", a song celebrating a sons' return home, the sense of relief that the war is finally ending is palpable.

As Spike used to deadpan after every song in concert: "Thank you, music lovers."

I'm a life-long Spike Jones fan. I have a large collection of his recorded output, but I've never had the opportunity of acquiring his complete recordings from 1941 to 1948 in chronological order.

Thank you very much, Mr. Fab, for sharing it with us.

Welcome back - I was starting to wonder if you'd given up, but clearly you haven't. And what a splendid post! I've got a couple of "best of" compilations, but apart from the really well-known tracks, the compilers have taken "best" to mean "wackiest", irrespective of whether the number is genuinely all that funny and/or has any real musical merit. This is a gold-mine of all the hard-to-get stuff. Thanks a million!

By the way, I was once told by a dealer in 78s who presumably knew what he was talking about that he had a rare multi-disc set of these guys performing, of all things, Stravinsky's "Rite Of Spring" in their own inimitable fashion! Of course, I was interested in buying it, but he couldn't find it, and assumed that the other man who co-owned the shop must have already sold it.

Since this compilation purports to be everything they ever recorded, am I talking about a recording so obscure that it's not even included here, possibly because they made it under another name? Or did the guy just misremember some other novelty version of the same composition, or dream it or something?

Fab indeed! This is a nice little collection of the stuff of Spike legends. Thanks!!!

I don't think they ever did Rites Of Spring.
They did do The Nutcracker Suite though...

Thanks for collecting and sharing. All we have to do enjoy it. Your efforts are appreciated!

Thanks, Plague! I obviously hadn't quite remembered the exact details of something which took place about 25 years ago. Nutcracker would make more sense stylistically anyway, so it must have been that. So this isn't the complete recordings then - any chance of a second helping?

Appreciate the comments folks, you all are very welcome. And I'm taking this on faith that this is the complete discography thru '48 - so sez the collector who uploaded this for me. Perhaps I should have said that these were all his singles, as Nnutcracker was indeed a (short) album. Its def not the complete Spike, as he made many records all the way up to his death in the '60s.

But I do love the idea of Spike-goes-modern. Imagine a City Slickers take on John cage, Minimalism, psychedelia, punk...imagine them doing the entirety of "Dark Side of the Moon". He died way too soon!

Thank you so very much for this!!!

i swear upon my own grave that i will MAKE the Rites of Spring out of all this Spike Jones material... you have my solemn word. that is too good an idea to pass up!

Hey, B'O'K - if you can really do that, I for one will hail you as a genius, because that's the most Dada idea I've heard in a long time! And therefore ideally suited for this website. I can't wait...

If anyone can do it, Buttress O'Kneel can. And if this really happens, I will seriously consider organizing a whole Spike-goes-modern compilation.

If this "Spike-goes-modern" thing is indeed going to be a thing, while I have neither the skill nor the patience to attempt something on the scale of "The Rite Of Spring", I will pledge a more modest contribution.

Once the idea had been mooted by our esteemed host, it occurred to me that I could very clearly hear in my mind's ear a certain rather famous sixties track played in this fashion. So put me down for 3 minutes of Spike Jones on acid.

PS - How many people actually read these comments? Might it be worth announcing the "Spike Lives!" challenge in the main thread to make sure everybody knows about it?

The idea of Spike doing Darkside of the Moon is just incredible. Making it out of his takes would be daunting!

Thanks so much for this collection Mr Fab. :)

Thanks a lot for taking the time to share these with us!

"Rite of Spring" -- Spike Jones never made a version, but the Roto Rooter Goodtime Christmas Band did. See it on YouTube: https://www.youtube.com/watch?v=B94-9clMGRE

Thank you for this music.