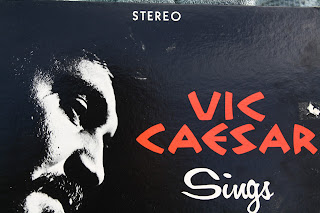 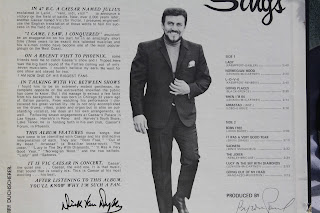 I posted this Friday, it got 22 views...and disappeared.  I hope to hell it was just some technical glitch...

Basically, this is one of the best lounge albums I've ever heard, and I've heard plenty. The man sings songs you thought you never liked (e.g.: "Born Free") with over-the-top gusto and finger-poppin' cool, he tackles both the usual suspects and such utterly unlikely choices as "Lucy in The Sky With Diamonds" (?!) and, as this interview proves, is as larger-than-life as his music.  The voice!  The enthusiasm!  The swingin' big band! Everything you want in a lounge record. And Dick Van Dyke wrote the liner notes.

Private-press lounge records often have some really great tracks, even if most of the album consists of the same ol' standards that have been done many times, and better, by the big-room acts. (I compiled the pick of the litter for a comp I did a while back called "I'll Take Las Vegas.") "Vic Caesar Sings," however, is a ridiculously good time straight thru. He does incredibly upbeat, absurdly enthusiastic versions of songs you thought you never wanted to hear again, like "Norwegian Wood," or (gak) "Born Free" and makes them great. Or songs that you never thought you'd hear come out of the mouth of a cat who worked the West Coast casino circuit (inc., of course, Caesar's Palace) like "Lucy In The Sky With Diamonds."

The man himself was equally amazing. This interview with him is a must-read, telling how a staunch Democrat came to write a song for Richard Nixon, among other primo show-biz anecdotes (Sinatra grabbing his ass, Elvis, Marilyn, Hugh Hefner...) And Dick Van Dyke wrote the album's liner notes. Why isn't this guy a legend?!"

Wow, how'd you do that?! It wasn't even saved as a draft on my end... What other wonders await us in this mysterious realm known as "Google Cache"?

A little bit of leg work and help from automated websites.

1. Googled; "Vic Caesar Music for Maniacs"
2. Look through the search results for differences in text from the most recent draft. (As in the case for well-known blogs, automated blogs tend to reiterate other people's work, such as in your case.)
3. Copy the found text and add it to your original search query and search again.
4. Usually the new results will bring up the fingerprint of the old page. Then click on 'cache' next to the title.
5. Profit and ring-a-ding-ding.

Will make a note of this, thanks anon.

What year is this album?

Glad you're diggin' it! Yeah, I think that's the article I linked to. Unfortunately, there's no date on the album. i can only make the obvious guess that it's sometime after '67 cuz of the "Sgt Pepper" covers.

Comment over due, I wanted to tell you that I really love this album. Thanks for posting it and that I pretty much think just about everything you post is AWesome! Thanks again.:)

Yeah, man, this and much of your other stuff is really great. thanks for everything, it's very much appreciated!!

Had the pleasure of playing drums for Vic at the LeBistro in Chicago in the mid 60's. He was singing and playing vibes. George Gaffney on piano and Sam Scafidi on bass. Had a ball. Talened and fun and crazy guy, Great memories. Tony Vitale

Great to hear from you, Mr. Vitale. I didn't see any musician credits on the cover - is this you and your LeBistro bandmates performing on this album?

Wish I was around in those days to see you and Vic. Oh, for a time machine!