Jaymz Bee and the Royal Jelly Orchestra - Shakin' and Stirred

Dig this nutty Canadian lounge parodist and his plethora of guest singers and different styles. This kinda thing was popular back when this album came out (in 1996) - is it time for the lounge revival revival?

All the songs are hits by Canadian artists except for whoever originally did "The Safety Dance," but I ain't complaining - the groovy sitars-a-go-go arrangement makes it the album's highlight. Up next: Jaymz' follow-up album covering rap/r'n'b hits.

Jaymz Bee and the Royal Jelly Orchestra - "Shakin' and Stirred" 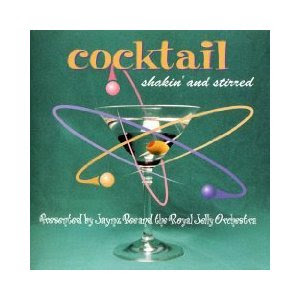 THis sopuns fun, thanks. As for Safety Dance, it was by Men Without Hats, who were also Canadian, I think.

For all these years I coulda sworn that an Australian band did that song - maybe I'm thinking of Men At Work? Never even bothered to look it up I was so certain. Funny how erroneous info can stick with you...

Thanks for the listing. Right up my alley!

men without hats, from la belle province quebec, did do 'the safety dance.' it was a pretty big hit that they followed up a few years later with 'pop goes the world'

as well, jaymz b fronted a band in the early 90's called 'look people' they were an amazing smorgesborg of fun.

I just got my CD. The thing could have been the soundtrack to that bio movie on Hunter Thompson with Johnny Depp. What fun! Love your Obama holding Captain Beefheart! You should have photoshopped in Sam Sacks or Mrs. Miller.

Thanks for this.
how fun is this!?!