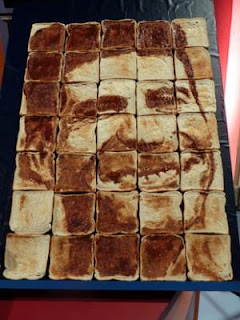 Don't you wish all of those "[name of country] Idol"/"X Factor"-type shows had good music? Well, now here's your chance to be Simon Bowel (pictured left, on toast) - vote for any of the artists featured on this sampler of home-brew recordings. Most of these acts wrote to me asking for a review of their work, but, goshdurn it, I just don't have the time. Forgive me, bedroom maestros of the world.
But these are all FREE releases, so if you like the sampler tunes, there's often whole albums for you to download. It's really good stuff. I wouldn't subject you-all to anything I didn't genuinely enjoy, so it's gonna be a tough call. A real horse race.

How do you vote? Simply listen to the "M4M Idol" collection i posted below and then leave a comment stating who's your favorite artist of the bunch. The winning artist will get a full-length review (woo-hoo!) in a future M4M post. Yeah, I know...sorry I don't have any valuable cash prizes/record deals to offer the winners, but hey, I get hundreds (sometimes thousands) of eyeballs on this blog each day, so they are getting some exposure.

Musically, it's quite a variety show: lo-fi outsiderness, postpunk prog, campy surf, subversive sound collage, Afro grooviness, ambient/noise soundscapes, twisted electronica, some strange things resembling catchy pop songs. And then there's Jinnwoo's "Sorry Song" which "...was written as an apology from myself to the world for being such a bad and horrible creature...I recorded the piece naked, and in the rain." What would Paula Abdul think?

Remember, you can't complain about who won if you didn't vote!
Posted by Mr Fab at Tuesday, September 06, 2011

oreaganomics create something to love

I'm really enjoying several tracks, and while I suspect this poll is being freeped I still must cast my vote for Bivouac, whose sonic tapestries are now hanging on my wall in lieu of sonic wallpaper.

And no, I'm not a buddy of anyone involved in Bivouac or anything, just someone who discovered them through the kindly mediation of Mr Fab.

I hear ya Aaron - no doubt some ballot-box stuffing going on here to some extent, but this was an experiment. Haven't decided yet if I'll do it again.

I'm voting for Butress - but she looks way hotter in the photos.

Buttress O'NeilL because i was ordered too.
Plus it ain't too bad

jinwoo. waaaaaay better than my stuff.

...welly well... freeped indeed! however anyway here is my vote... Oreaganomics - create something to love. and thank you FAB!

i've looked up 'freeped', so now i know what it means. definitely no 'freeping' involved here. i did tell peeps that this blog existed and that i was mentioned - but that's allowed, isn't it? i voted only once, and that was for jinnwoo. coz it's FUCKING AWESOME.

anyway. just saying - if there's been so-called 'freeping', it hasn't been by me.

Congrats Ms O'Kneel, yep, i guess its' allowed because i never established any ground rules, and, as i wrote a few days ago when you got your own post, you're as deserving as any for all your good work. Check it out:
http://musicformaniacs.blogspot.com/2011/10/envelope-please.html

And nice of you to vote for jinnwoo - sounds like the guy could use some cheering up!

thanks, very exciting to even see i'm on a list of 'interesting music' at all - and this is kinda perfect timing, as the new album is now finally out!

oh, heh, i see you know about the new album already! eep!