THE WORST CHRISTMAS SONG EVER 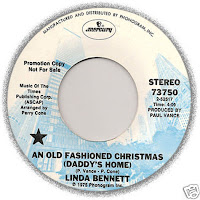 It isn't often that the world of political talk radio ventures into Music For Maniacs territory, but recently Alan Colmes featured a record from his collection on his show that he described as the "worst Christmas song ever." He may be right. I certainly haven't laughed this much at a Christmas recording since the Richard Cheese album came out, but that was intentional humor.


It's a Mercury Records single from 1975, produced and co-written by Paul Vance, who had an extremely successful string of hits in the '50s-thru-'70s, such as Brian Hyland's "Itsy Bitsy Teenie Weenie Yellow Polka Dot Bikini" and Perry Como's "Catch A Falling Star." Singer Linda Bennett was another pro, with an RCA album and several tv and movie credits under her belt by the time they made this. And, of course, Mercury was a major label. So there was no excuse for this.

It's starts off as a typically bland bit of mid-70s pop, then slowly moves into the twilight zone before arriving at a simply ludicrous, laugh-til-you-cry ending. SPOLER ALERT: Don't read the comments to this post until you've heard the song!

OK, first of all: if Dad didn't take the bus, how'd he get home?

"Who will walk me down the aisle on my wedding day?" As Colmes pointed out: Yeah, that's the first thing a little girl would say when she thinks her father's DEAD!

My wife sez: who rings the doorbell to THEIR OWN HOUSE?

At first I thought this was hyperbole. How could anything be worse than Neco's Christmas in the Stars? ...wow. I was wrong. My favorite bits:

1) Not one bit of remorse is even hinted at for the other families that would have lost their parent/spouses. Daddy is home and he's got presents.

2) How jarring the "news bulletin" is within the song. How are the carolers going to pull that off I ask you? Won't somebody think of the carolers?

JOSH - We can only hope that the bus was carrying entire families, thus wiping out the local genome at one stroke and leaving no one to go through the agony of mourning. (Christmas, after all, is the time for miracles.)

The father sounds like something out of a Bob Fosse movie.

There were no survivors? That must have been some tree...

Effin' brilliant... Utter disaster on every level!! I just threw up a little in my mouth...

(This will have a cherished place in my own holiday playlist.)

This is up there with Red Sovine's classic "Is There Really A Santa Claus?" (required listening)

Truly awful. Thanks (I think). I was hoping for something even worse, though - maybe a cool Weird Tales ending, with daddy's mutilated corpse at the door, holding an armful of bloody, crushed presents.

The worst Christmas song-by a mile-has got to be that crap by the Pogues.
This one is actually quite clever -like Polkadot Bikini it has a powerful punch line at the end

'The bus is always right on time!' - thanks for that pointless fact that doesn't actually mean anything...or sound that true...

I was hoping it was going to end in Nuclear War when it beeped...

So old-fashioned Christmases is not caring about victims of a bus crash? Nice...also, they'd never announce fatalities like that or that quickly!

Also she goes from hopeful to desperate really quickly? It's fine - OMG END OF THE WORLD!!!

'Who is gonna buy me toys?' - is that the best you can think of?

A track that probably trounces my current favourites, Little Marcy's C-H-R-I-S-T-M-A-S and Tiny Tim's Santa Claus Has Got The AIDS this year...it's like the I Want You Back of Xmas music...